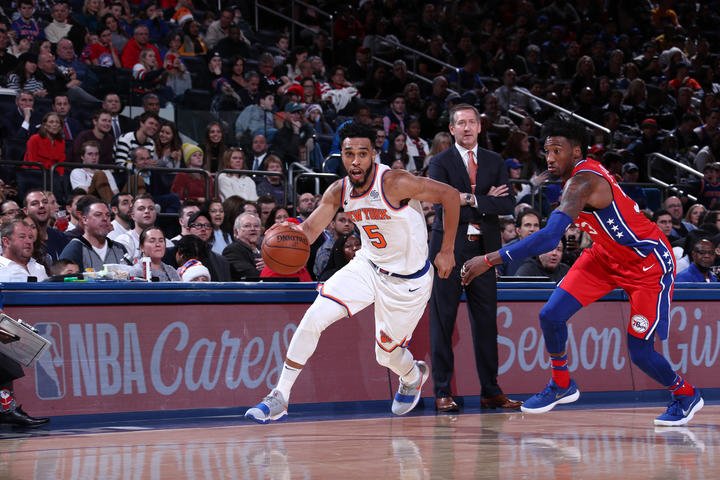 Enes Kanter’s best efforts were marred by missed free throws from New York as they fell to Philadelphia.

It was uncertain if fellow superstar big Joel Embiid would suit up for the first of the NBA’s traditional marquee slate. In the first of four meetings between these two young squads, Embiid saved up his body and arsenal of offense just for the Knicks. The downside is by Kristaps Porzingis being positioned as the four, we didn’t see the two behemoths go one-on-one as much as we’d hoped.

The Knicks — who were 5–0 at the Garden in December — came out looking to push the ball aggressively to kick off Christmas Day hoops. The 76ers are one of the league’s worst defenses, giving up just over 109 points per game. The Knicks took advantage out the gate by attacking the paint. Courtney Lee started “wheeling and dealing” to establish his offense, which has traditionally been a key cog to Knicks’ victories. He had this elite floater early in the first, to get 12 first half points.

Courtney Lee with the TOUGH floater in the lane, #Knicks take the lead, 10-9 halfway through the first.

The squad didn’t attempt a three-pointer until the end of first quarter. That stood out to me because several times KP had a mismatch on the switch outside. The upside is I liked his proclivity to catch the ball inside and go to work, as he did versus Dario Saric:

KP turn and hits over a helpless Saric

The Knicks and 76ers traded the lead back and forth to close the first half. The second half started off cringe-worthy, with the Knicks struggling to keep pace with Philly. It began with a Jarrett Jack flagrant on Joel Embiid, and then another foul by Enes Kanter. It doesn’t take much to get Embiid going in spite of him being on a minute management. Thankfully for the Knicks, Kanter is automatic from the paint and gets double-doubles even on his worst day.

Once again, this was a winnable game that the Knicks let slip away due to little mistakes. Jack, who has been okay this month, was a liability in the backcourt. In situations like these, I would like to see Coach Hornacek trust Frank Ntilikina more to pick up the slack even if he is foul trouble. Additionally, I wouldn’t have minded a bigger lineup with Lee bringing the ball up as a 1 and Doug McDermott in on the wing for his pesky defender role.

A Knicks’ loss today ended the 76ers’ losing streak while the squad heads on the road to Chicago then San Antonio. My only Christmas wish and hope for 2018 is in line with our editor-in-chief: