Knicks Mercifully Match Up With Raptors for Final Time 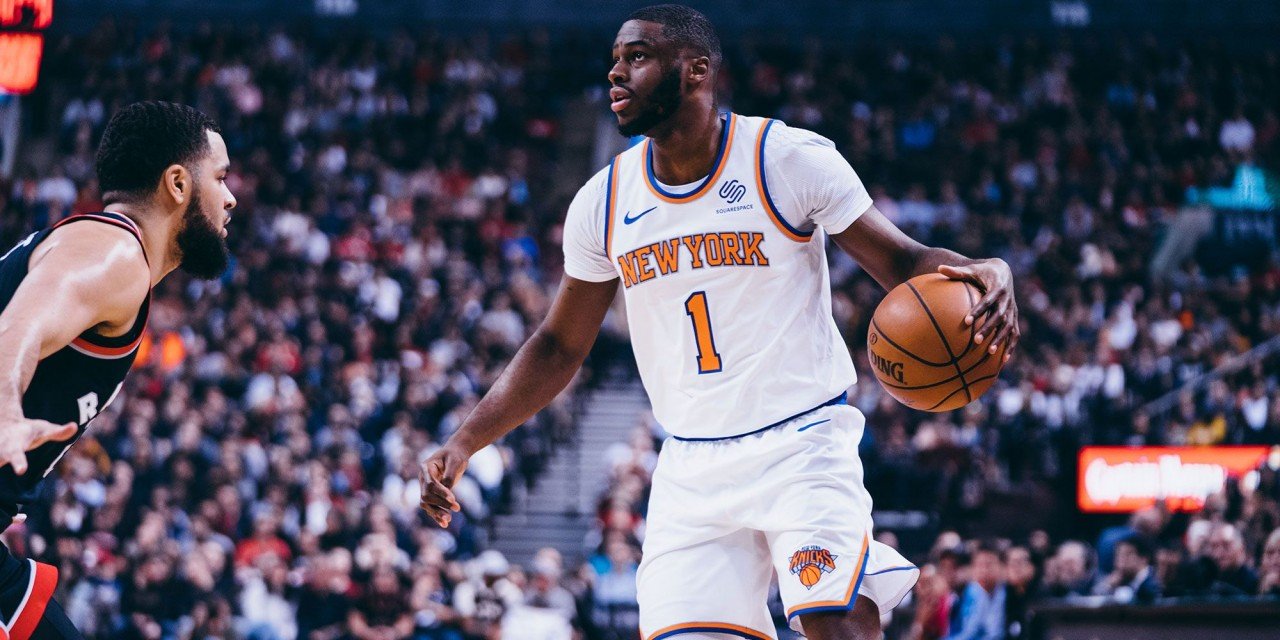 The New York Knicks and Toronto Raptors are set to meet for one final time this season when they take the court on Thursday night.


The Raptors (52-23) are in hot pursuit for the top seed in the Eastern Conference.

Milwaukee currently has a nice cushion at the no. 1 spot, and the Raptors will have to string together a winning streak and hope for some Bucks’ misfortunes coming down the stretch.

Toronto did itself no favors by losing back-to-back games at home against Oklahoma City and Charlotte but managed to beat Chicago comfortably. With the way both the Knicks and Raptors have been playing as of late, unsurprisingly, the Raptors are heavily favored.

New York enters Thursday night with a four-game losing streak, and inches closer to the 2014–15 season’s franchise-worst record of 65 losses. So far this season, the Knicks have been beaten by the Raptors in each of their three previous meetings.

Toronto downed the Knicks on Nov. 10, 128-112. In the rematch on February 9th, it was a much closer game, but Toronto prevailed in a 104-99 victory. Both teams met earlier this month, where the Raptors won by a comfortable 36-point margin.

The Raptors will have an opportunity to complete the season series sweep. Tip-off is at 7:30 p.m. ET.

In the previous Knicks-Raptors game earlier this March, there was some drama stemming from this sequence:

Mitchell Robinson goes a little out of control here, injures Lowry after falling on what appears to be his leg/ankle. pic.twitter.com/3DakAjmhz6

The game was virtually decided by then. A clumsy, haphazard accident for Mitchell Robinson resulted in an ankle injury for Kyle Lowry, who exited the contest as a result.

Robinson wasn’t available to comment afterwards, but the court of public opinion decided to settle it on Twitter. Knicks fans came to the defense of their rookie center, believing he was just making a play at the ball and everything else that happened was unintentional and a series of unfortunate events. Meanwhile, Raptor fans were ready to crucify Robinson and call his play “dirty.”

Lowry said he thought the play was “a little bit dirty” that “he grabbed me, pulled me down … .”

After that injury, Lowry missed the next two games, a home-and-home with the Oklahoma City Thunder. While he doesn’t seem like the type to hold a grudge, it’ll be interesting to see if there’s any remaining fallout. Maybe not from the All-Star guard himself, but possibly his teammates.

Drama aside, the Knicks were dominated in that previous matchup. Although it was a balanced effort by the Raptors, with eight players scoring in double figures, Lowry left his mark. He had 15 points and eight assists, going 5-of-9 from three-point range before exiting the game.

On the other hand, it was a frustrating night for Robinson, and that incident with Lowry was just the moment to top it all off. Robinson played 14 minutes off the bench in a scoreless outing. He did grab five rebounds and finish with three blocks, but he also fouled out in that short amount of time.

Robinson bounced back immediately, with great performances against Utah and Denver in the following games. Can he improve upon his previous game with Toronto? Can the Knicks slow down and frustrate Lowry?

It’s a love-hate relationship between Emmanuel Mudiay and Knicks fans. One night he may be inefficient and turnover-prone, then he might be carrying the team in the next night. Regardless of how fans feel about him, they should be ready for even more Mudiay on Thursday night.

ESPN’s Ian Begley reports that head coach David Fizdale doesn’t have a timetable for Frank Ntilikina’s return to the court after he re-injured his groin on Sunday against the Clippers. It’s the same type of injury that has hampered Ntilikina since the start of the New Year.

Apart from Ntilikina’s injury, Dennis Smith Jr.’s status is also uncertain, per The Athletic’s Mike Vorkunov. This makes Mudiay the last point guard and true playmaker standing. Sure, Kadeem Allen can run the point when needed, but the main responsibility will lie on Mudiay.

Mudiay is coming off of a hot performance against the Clippers, in which he carried the Knicks in a 26-point, six-rebound, and seven-assist performance. With all the injuries, Mudiay will have to dial up a similar performance, or it could get ugly real quick.

Kevin Knox is healthy for tonight’s contest and will start against Toronto. Dennis Smith Jr. is also available and will come off the bench, per NorthJersey’s Chris Iseman.

»READ: What do the Knicks’ most effective lineups reveal about the team?