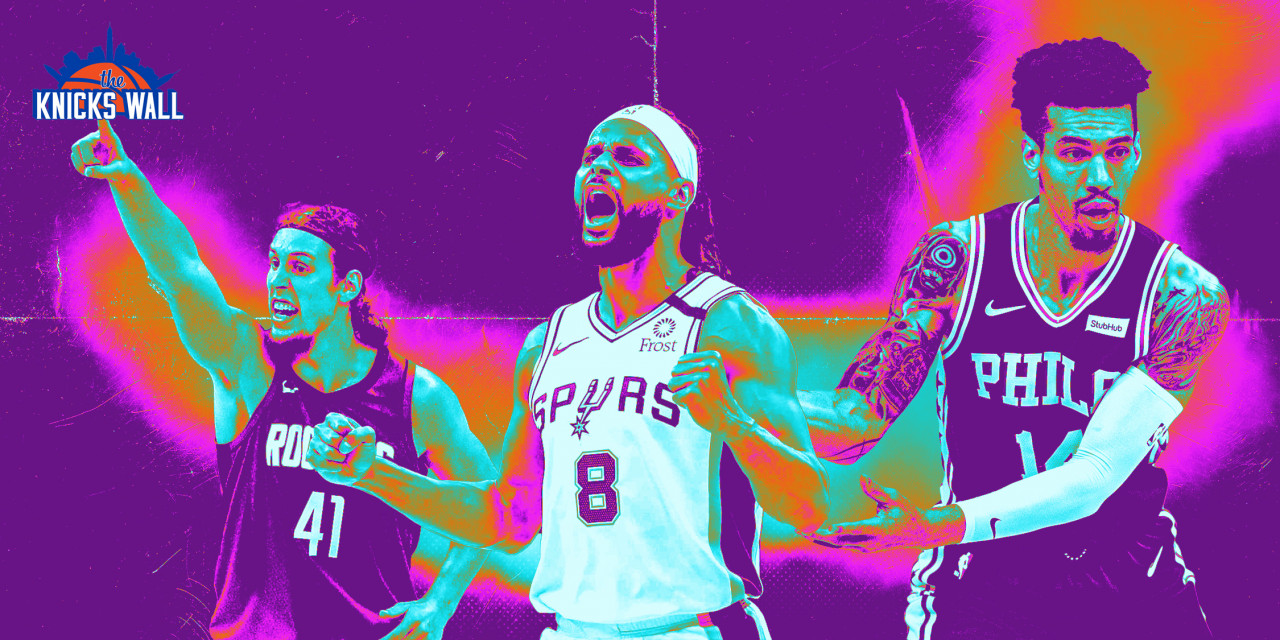 No single event plays a greater role in determining the NBA landscape than free agency. Over just the past few years, LeBron James, Kawhi Leonard, Kevin Durant, and countless other stars have switched teams and thus the balance of power in the league. It’s a period defined by intense emotions from fans, from joy when a marquee talent comes to town to despair when a player departs earlier than expected or a team misses out on a big name. For Knicks fans, their free agency experience falls under the latter. With New York’s enormous media market comes expectations that the franchise will land a big fish. That hasn’t come to fruition quite yet.

However, aside from Kawhi Leonard and Chris Paul (both of whom may not even elect free agency due to player options), there aren’t any legit stars on the free-agent market. The Knicks could overpay for a mid-tier player like Evan Fournier, for example, but that would hinder the team’s financial flexibility in 2022 when a bevy of stars hit the open market. Why not make lesser moves around the margins to address the team’s holes and then enter 2022 guns blazing?

None of the players to be mentioned are stars or anything close to them. They aren’t household names either, but they could all help the Knicks right away and for a fair price that won’t break the bank. Let’s break down three under-the-radar free agents who make sense for New York.

When discussing the NBA nowadays, the word undervalued gets thrown around like a football. But if anyone is deserving of such a title, it’s San Antonio Spurs floor general Patty Mills. For the past decade, Mills has quietly been one of the more productive backup point guards in basketball, and in more ways than one.

Firstly, Mills is nothing short of an iron man. As the saying goes, sometimes the best ability is availability. Well, across the last 10 years, Mills has played 50 or more games in all but one season and suited up 80 times in five seasons. He’s been able to stave off the injury bug for the lion’s share of his career. His addition would serve as a breath of fresh air for a Knicks team that dealt with an injury-ravaged 2020–21 season.

While Mills’ dedication to being there for his team day in and day out is commendable, it only means so much. It’s his dynamic scoring ability from deep that truly makes him a name the Knicks should target this offseason. Mills has shot no worse than 35.5% on threes since entering the pros and nailed them at a 37.6% clip last year, per Cleaning the Glass.

Additionally, 22% of Mills’ made threes in 2020–21 were unassisted, which ranked in the 55th percentile among all combo guards. This metric highlights his borderline elite ability to create three-point shots off the bounce. Immanuel Quickley and Alec Burks were the lone two Knicks to have a higher percentage of their treys unassisted, and neither of them shot it at the volume Mills did (6.3 attempts per game, 9.2 per 36 minutes). It’s safe to assume that Mills would instantly be the most valuable three-point shooter on New York’s roster when factoring in both his efficiency and usage.

Though the Knicks were fourth in the league in three-point percentage, the fact they finished 27th in attempts means they weren’t actually an elite three-point shooting team. Add in Patty Mills? That changes things, as New York’s long-range tries would inevitably skyrocket. And perhaps his presence would inspire Coach Tom Thibodeau to be more inventive in creating off-ball looks for his shooters, including Reggie Bullock and R.J. Barrett.

Admittedly, at just 6’0″, he’s no game-changer on defense. Still, he works hard to hawk guards when defending on the ball, and with Thibodeau and rim protectors like Mitchell Robinson and Nerlens Noel (hopefully), the Knicks can hide Mills’ shortcomings better than most. Considering Mills is nearing 33 years old, New York won’t have to bring out the Brink’s truck to sign him, either. Mills is an affordable, dependable, and efficient floor general option and the best available long-range shooter at his position not named Mike Conley.

3-and-D wings are a hot commodity in the NBA. And for a good reason, since perimeter defense and three-point shooting are two hallmarks of success now. Those who can stretch the floor and defend guards and wings at a high level always seem to find a home. Green is one such two-way dynamo who has bounced around from contender to contender and improved every team he’s joined.

Green would be the best perimeter defender on this New York roster by a considerable margin. The advanced stats back up this notion, as Green’s 2.1% steal percentage last season ranked in the 95th percentile and was tied with Kawhi Leonard for the highest of any forward to play 1,000 minutes.

Not to mention he’s a top-flight shot blocker for his stature, who has averaged an uncannily high 0.8 blocks per game throughout his lengthy career; his block percentage of 1.4% with the Philadelphia 76ers was good enough for the 82nd percentile. When factoring in that Green stays out of foul trouble and commits very few frustration fouls (69th percentile in foul percentage last year), he’d be a seamless defensive fit in the Big Apple.

The Knicks would finally have a de facto wing irritant in Green. Someone who can check the Kawhi Leonards and Kevin Durants of the world and defend the best player on a nightly basis. Bullock was usually assigned this task, and while he’s far from a slouch on the defensive end, Green is undoubtedly superior.

Sixers defense came to play early on this one

Green’s not a sexy offensive player. He’s essentially a one-trick pony spot-up shooter. A staggering 79% of his field goal attempts came from beyond the arc, and he hardly ever creates scoring chances for himself or his teammates. But credit to Green, he’s not one to play overzealously/try to do too much. Instead, he sticks to what has worked for him: the long ball.

It wasn’t by coincidence that Green—for a few seasons—held the record for made threes in an NBA Finals series after sinking 59 in 2014: he can shoot the leather out of the ball. Green was a 41% long-range marksman in 2020–21 (44% in the non-corners) and is just two seasons removed from swishing 46% with the title-winning Toronto Raptors.

At the very least, Green is Bullock on steroids. Their defining abilities are similar, but Green does just about everything a bit better than his counterpart. Green impacts the game at a high level on both ends and is a winner. Therefore, he’d look fabulous in orange and blue.

Olynyk’s season was a tale of two teams: the Miami Heat and Houston Rockets. The former Gonzaga standout spent the first 43 games of the year with Miami, averaging a modest 10 points. Then, he was dealt to the Rockets as part of the package that sent Victor Oladipo to South Beach.

From there, Olynyk took full advantage of his opportunity on a bottom-dwelling Houston team. Across 27 games as a Rocket, Olynyk put up 19.0 points, 8.4 rebounds, and 4.2 assists in 31.1 minutes of play. Without question, the best stretch of his career, and this stretch was a microcosm of the rare skill set Olynyk brings to the table as a big.

KJ Martin flies in for two off the pass from Kelly Olynyk! pic.twitter.com/DuywfnGvpn

For one, Olynyk is an excellent opportunistic playmaker. He’s comfortable attacking closeouts off the bounce and is surprisingly agile compared to the common seven-footer. He uses this skill to get into the teeth of the defense and find cutters and bigs camping at the dunker’s spot. Plus, Olynyk can operate as a playmaking hub at the top of the key, where he’s an intuitive dribble-handoff initiator who gets the rock to shooters in a timely fashion. With an assist percentage of 20.5% as a Rocket (93rd percentile), Olynyk offers facilitating chops unparalleled by other bigs on the roster.

Passing is not the only area of Olynyk’s game where he truly separates himself from the behemoths on New York’s roster. Though capable inside scorers, Robinson, Noel, and Gibson are iffy threats at best outside the painted area. They’re not pick-and-pop bigs that add an extra layer of lethality to an offense. Olynyk, on the other hand, has been an above-average jump-shooter both from the mid-range and the three-point arc since stepping foot in the NBA.

Sure, Olynyk traditionally hits his threes at a high percentage, including 39.2% with the Rockets. But it’s the notion that he spaces the defense at the five and simultaneously allows the Knicks not to go small that is of the highest importance. New York had to choose to either roll out no floor-spacers at center or inject rookie Obi Toppin at the small-ball 5, who suffered growing pains on defense. Inserting Olynyk into the fray means New York could feasibly boast five perimeter shooters at once for long stretches.

When Kelly Olynyk was on the court last night, the Rockets' defense was actually pretty damn good (96.8 DRTG). It just simply fell apart when he went to the bench and Wilson was the C.

To address the elephant in the room: yes, Olynyk is a better defender than Toppin. While not one to jump out of the gym in any sense, Olynyk is an intelligent rim protector who employs the rule of verticality to deter shots at the rim. He’s an adequate pick-and-roll stifler as well who has a knack for muddying up passing lanes and causing deflections, as evidenced by his 1.1 steals per game this season. Olynyk’s I.Q. makes up for his unspectacular measurables and athleticism. He cannot reliably switch onto guards and wings, but he has the strength and foot speed to make life challenging for most bigs nonetheless.

Olynyk could be part of the answer to New York’s well-documented scoring difficulties. A three-level scorer and a good ball-handler and passer, his skill set would presumably make the game easier for the Knicks and take some pressure off the primary scorers. And while he’s not a flawless defender, he’s not nearly detrimental enough to dismiss as a viable free-agent option. New York would be hard-pressed to find a player with his combination of size, finesse, and smarts.