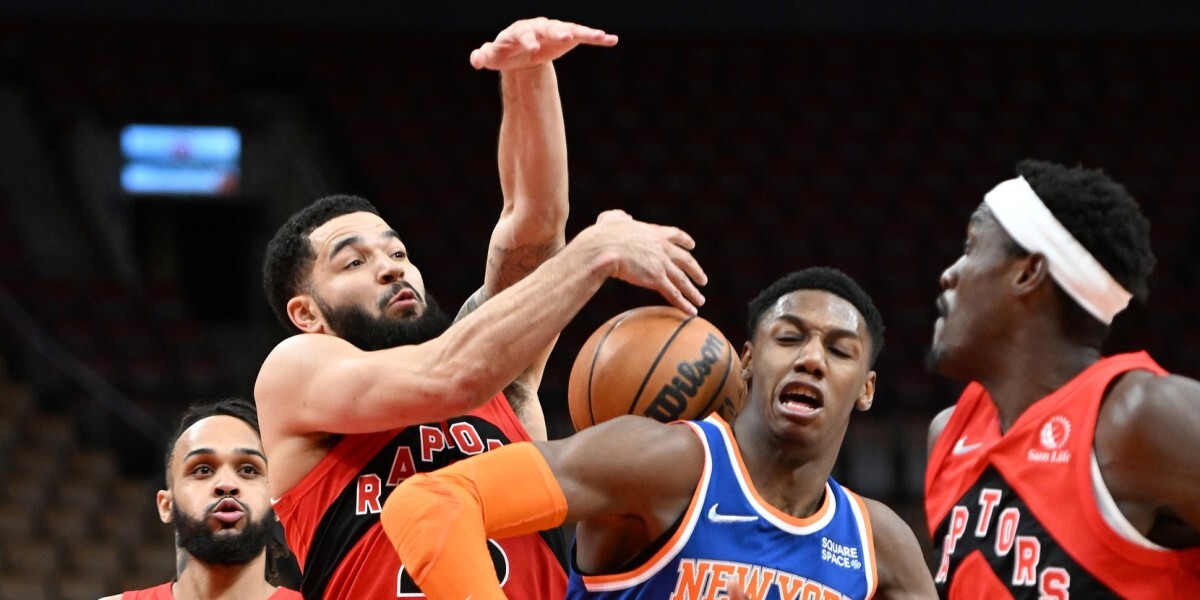 With Julius Randle and Mitchell Robinson out, the Knicks were no match against a fiery Fred VanVleet and the Raptors in Toronto.

The Toronto Raptors (16-17) defeated the New York Knicks (17-20) by a final score of 120-105. For Toronto, Pascal Siakam finished with 20 points, 14 rebounds, and seven assists while Fred VanVleet had 35 points, including 17 points in the third quarter. For New York, Evan Fournier had a team-high 20 points, while Obi Toppin finished with 19 points, six rebounds, and six assists. With the loss, the Knicks finished their four-game road trip at 2-2.

With Canada limiting crowds for the next three weeks, the Knicks and Raptors played this one amongst an empty arena. You could hear everything—the PA announcer, clearly, on every call, the squeaks of sneakers, and even players calling out defensive positioning and helping younger players get to where they need to be.

With Toronto having their starting lineup back—Fred VanVleet, Gary Trent Jr., Scottie Barnes, OG Anunoby, and Pascal Siakam—while the Knicks dealt with several starters out, you knew what time it was. So did the Raptors, who got out early, thanks to being aggressive and attacking New York’s Mitchell Robinson-less defense. Anunoby, in particular, feasted early on the Knicks’ defense by attacking and overpowering the likes of RJ Barrett.

To New York’s credit, the Knicks did try to find good shots. With Julius Randle out, the ball moved a bit more, extra passes shuffled around the floor as New York would look for open three or open lanes to attack. Toppin’s passing flashed early in the first quarter (he would finish with a career-best six dimes). Barrett found some good looks while Alec Burks got some nice looks off the bench. For a brief moment, the Knicks looked like this was going to be a close game.

Heading into the half, we saw some positives with the Knicks. Despite being undermanned, they played hard and despite not shooting well, they kept the game close. Fred VanVleet ended that. With 17 points in the third quarter, VanVleet cracked the game wide open for the Raptors, essentially breaking New York’s spirit with an array of outside shots.

Once Pascal Siakam got involved, that Raptors lead, which lingered around six-to-eight points, ballooned to 15. Evan Fournier knocked down some threes, we got some impressive finishes by Barrett, but once Toronto kicked the lead into double digits, there was no chance for New York to come back.

This was a tough one, but one where we got the kids to play, so I’m fine watching them continue to grow. Quentin Grimes had a solid performance on defense, specifically on help defense. Kevin Knox continues to play hard and despite not seeing much playing time (I don’t get it), Miles “Deuce” McBride continues to be active on both sides of the ball.

Obi been finding guys wide open for 3 all game so far 👀 pic.twitter.com/VxDe5A33pX

The Knicks travel back home to Madison Square Garden to host the Indiana Pacers (14-22) on Tuesday, January 4th. This will be the third matchup between the two teams, with the Pacers winning both matchups.