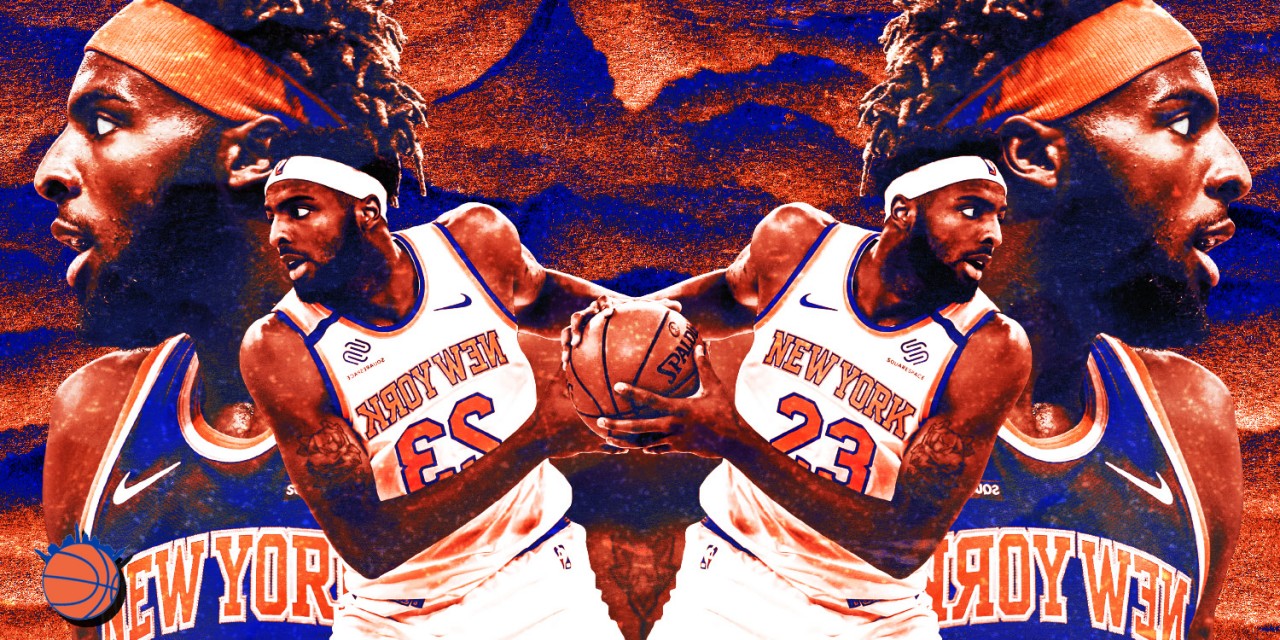 Second-year center Mitchell Robinson had a strange season for the Knicks, including breaking the all-time field goal percentage record. What’s next for him?

Mitchell Robinson is a rarity among the last decade of New York Knicks players: a positive, known quantity.

Those numbers are similar to Utah Jazz All-Star Center Rudy Gobert, who averages 15.1 points, 13.7 rebounds, and two blocks per game. Robinson also leads the league in field goal percentage at 74.2%—4.4% higher than Gobert, who is the next highest player at 69.8%.

This is not to say that Robinson impacts the game as much as Gobert, who is the premier defensive center in the NBA, but the comparison shows how quality Robinson has been on the court this year. When Robinson steps on the floor, you know you are getting supreme rim-running, excellent rebounding, and limitless energy on defense. His biggest skeptics, however, will argue that Robinson did not show enough development from his 2018–19 All-Rookie Second Team season to his sophomore campaign.

According to Basketball-Reference, here is his shooting summary from 2018–19:

You do not need to be a data scientist to tell that a pattern is developing here. Advocates for Robinson will, justifiably, ask why fix something that is not broken. He only averaged 2.5 more minutes per game this year than he did his rookie year. He only started seven games. There are clearly facets missing from his game that prevented David Fizdale and Mike Miller from really unleashing him night in and night out.

People will point to foul trouble preventing Robinson from staying on the floor, but that was much more of a problem earlier on in the season than it was as the season progressed. After December 1st, 2019, Robinson only had nine games with five or more fouls, and he only fouled out in three out of the 46 games.

Both coaches were likely more comfortable using Robinson as a lob threat to punish second units that were not long enough or savvy enough to prevent him from eating up inside. His single dimensionality on offense was great for the Knicks, as the second unit offense hummed along pleasantly with him this year, but it also kept him from breaking into the starting lineup.

There are a few ways he can improve to bolster his chances at starting.

Those who follow Robinson on social media know he has been in the gym working on his perimeter game:

It is not uncommon for NBA big men to see a big spike in three-point attempts after one offseason (think Marc Gasol or Brook Lopez), but I do not foresee this being the case with Robinson going into next season for a couple of reasons.

First, he shot 56.8% from the free throw line last year. There is still a lot of work to be done on his shot, even though his form looks solid and he has been known to nail some threes in warm-ups. Second, he is too useful around the rim on offense. His offensive rebounding rate was 49.2% last season, the 17th highest of players who appeared in more than 50 games. (The next highest rate on the Knicks was Taj Gibson at 42.9%, before falling off a cliff to Julius Randle at third on the team with 28.4%.)

Robinson creates too much value by grabbing boards and putting the ball back in or kicking it out to teammates for open looks. Lastly, this is really the only jump shot he made outside the paint this year:

There is a lot that needs to happen for both Mitchell Robinson and the Knicks before we should hope to see the second-year center attempting multiple threes a game. There are still ways, however, that Robinson can become more of a threat away from the rim.

One thing he did spectacularly this season was get more involved off the ball.

Defenders are conditioned to guard the perimeter and when shooters run off screens, the screen defender has to show toward the shooter so he’s not wide open.

Mitch notices this and when his defender steps out to show, he scoots right behind him to the rim pic.twitter.com/mghdzcZrGN

This is a great way of not only getting easy looks, but it also pulls his defender away from the rim to open up the lane.

There were very few instances of Mitchell Robinson scoring after putting the ball on the ground this year, and none of them really amounted to anything more than a power dribble and shot attempt:

This, however, was the most encouraging play by Robinson from last season:

If Robinson can consistently take one dribble and force his defender to come away from the rim, he will open up driving lanes for himself and draw help defenders. Right now, Robinson is only a threat in two areas of the floor: at the three-point line, when he is setting and then slipping a screen, and at the rim. If he is able to effectively deploy his dribble on the move, he will be able to operate in the short roll in between those spaces, opening up shots, lanes, and space for his teammates.

Another thing Robinson can work on is his positioning in the dunker spot. He already has shown a keen ability to finish down low, but there are more effective ways he can position himself to help keep the lane open.

In the event that he does not get the ball there, he is well positioned to rebound. The majority of his assists this year came from either dribble hand-offs up top or offensive rebounds kicked out for threes. On a team starving for shooting, keeping Robinson near the rim is am easy way to get open looks.

More mobility in the dunker spot is a plus. There are two things I would like to see Robinson do when in this position. The first is start a step or two further away from where he traditionally starts.

By starting where the arrow is instead of on the block itself, he will force better defenders to commit to either help, in which case Robinson can follow the defender in for an easy lob, or stay with him to create an open lane for the ball handler. In the event that Robinson develops the ability to take the power dribble and finish through his man, catching the ball out there is not a problem.

The second thing Robinson can improve on here is staying mobile and reacting to his teammates’ drives. He often defaults to sealing his man too early in the possession in preparation for the rebound instead of reading the flow of the play. Here is a good example of Robinson reading Randle on the short roll to flash to his vision, which gets him an easy bucket:

If Robinson can continue to improve on defense and limit his fouls, and he makes small but important strides like working more effectively off the ball, being able to put the ball on the deck, or commanding both on-ball screens and dunker spot positioning, it will be hard for any coach to keep Mitchell out of the starting lineup going forward.

Robinson is a player who has somehow both surpassed everyone’s wildest expectations and has disappointed others with lack of progress. Returning next season with a few tricks like these up his sleeve will ensure Robinson can reach his ceiling as an NBA starter and could push for consideration as an All-Star.