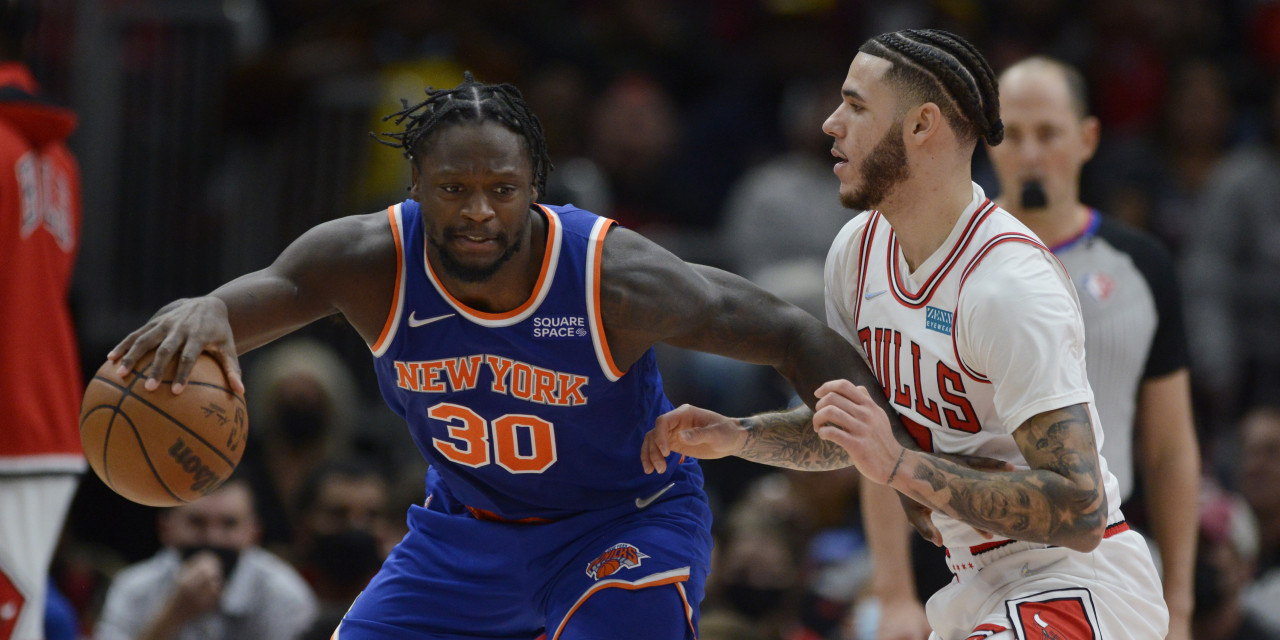 The Knicks play game two of their new starting backcourt experience at home tonight against the Chicago Bulls.

Forget about Tuesday. Forget about the officials admitting that Julius Randle doesn’t get as many whistles because he is stronger than most. Forget that Kevin Durant got bailed out for smoking a wide-open dunk. Forget that Obi Toppin played just 12 minutes in the rotation’s first true run without Kemba Walker. Forget it all.

This rekindled rivalry seems to have some legs to it. In their first meeting of the season, DeMar DeRozan downplayed RJ Barrett locking him up on the final shot, and Mitchell Robinson was blamed for Patrick Williams’ season-ending wrist injury. DeRozan got his payback in the second meeting, also in Chicago, with 31 points.

Tonight, the rivalry finally makes its way to New York. Alec Burks will try to make it three-for-three in scoring at least 20 points as a starter, and the Knicks will look to get back to .500 at home, where they are currently 5-6.

Here is what else to look for.

Alec Burks has not let the promotion go to his head. Burks is averaging 24.0 points per game and shooting a scorching 47.1% on three-pointers. He has brought the self-sufficient scoring dynamic to the starting lineup Thibodeau had hoped Walker would bring, and the results have yielded much stronger starts.

Randle has returned to his role at point-forward and looked more like himself on Tuesday in Brooklyn. Before he exited the game, Barrett also appeared to be on his way to a second consecutive positive outing.

The underrated storyline of the Burks-for-Walker swap was the vast upgrade in defense. Walker was a larger liability on defense than expected. Burks is not a liability. In fact, he may even be a plus on that side.

Largely forgettable quarter, but this is a sweet swat by Alec Burks pic.twitter.com/xpM0mkfFfE

The team will need his scoring first and foremost tonight, however, with Zach LaVine and DeRozan sure to come firing.

Show Me the Minutes

Tuesday night was mostly high-level basketball that was very entertaining—except for the third quarter. Had Randle and Derrick Rose not kept the team afloat, the electric fourth quarter never even happens. Guess who did not log a single minute in that quarter?

If you guessed Obadiah Toppin, congratulations. Toppin played the bulk of his 12 total minutes in the fourth quarter, a quarter in which the team went blow-for-blow with two of the best scorers on the planet.

Toppin scored eight points, hauled in two rebounds, and dished out one assist in 11:36. Walker’s removal from the rotation was reason enough to believe Toppin would see a bump in minutes, not a decrease, especially when you factor in Barrett leaving the game early with an illness.

What Thibodeau is waiting for with Toppin is anyone’s guess. If Barrett can’t go tonight and Toppin still sees his minutes in the 10-15 range, it may be time to gently smash the panic button.

It’s not all bad though, as Immanuel Quickley has found his way into the inner circle. Quickley has logged at least 30 minutes in both games without Walker in the rotation, and 38 minutes on Tuesday even with Rose back. There is hope Toppin can join his running mate, it may just require more patience than wanted.

Not much to report for this one. Both teams will be at near-full strength with the Bulls only missing Coby White (COVID) and the Knicks could be without Barrett (non-COVID illness).

RJ Barrett and Nerlens Noel are out, per the team.

RJ Barrett (illness) and Nerlens Noel (sore right knee) are out for tonight’s game against Chicago.