The Knicks Must Do Something at the Trade Deadline 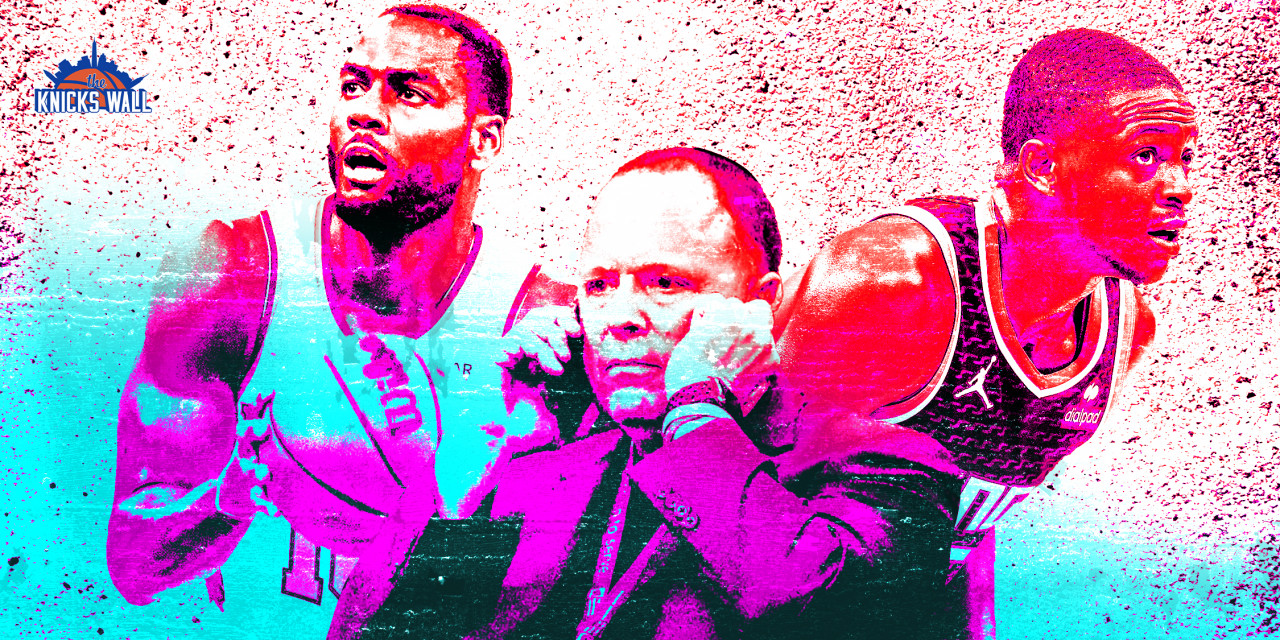 The Knicks need to shuffle the roster before the NBA trade deadline. Failing to do so would ensure that this season is all but wasted.

The time for passivity has passed. The New York Knicks must do something before the February 10th trade deadline.

The ‘Bockers are going nowhere fast, currently sitting at 12th place in the Eastern Conference with an underwhelming 24-28 record. The eye test reveals larger problems. Good performances are few and far between; slow starts, uninspiring stretches, and full-blown meltdowns against zone defenses are the new commonplace.


It is now abundantly clear that whatever magic existed around this core group of guys last season has evaporated. This year’s edition of the Knicks does not look like a playoff team or a play-in team for that matter.

Upgrades made over the offseason made to bolster the offense have not panned out. The Knicks rank 27th in points per game (104.4) and 27th in field goal percentage (43.6%) Point guard remains the main problem child, as it has for the better half of 20 years.

The point is, things need to change, regardless of the front office’s vision.

In recent deadline periods, the Knicks have opted to live for tomorrow.

Leon Rose’s first trade deadline featured one marginal move, on its face, that ended up having the impact of a major trade.

The acquisition of Derrick Rose, which cost the Knicks a walking dead Dennis Smith Jr. and a second-round pick, ended up being the best trade of the NBA season in terms of value added. Rose’s arrival coincided with the Knicks’ miraculous rise up the standings. The trade also masked the light lifting done in-season by the front office.

During this trade period, the front office made a similar deal, parting this time with a walking dead Kevin Knox in exchange for Cam Reddish, the underperforming yet highly regarded former teammate of RJ Barrett.

Tom Thibodeau has kept Reddish clear of the rotation, with credible reason, albeit a foolish one. There are no minutes for Reddish at the moment given the player he was traded for rarely took off his warm-ups.

The foolishness behind Thibodeau’s excuse is that the rotation Reddish can’t crack is one that has yielded a 24-29 record. Outside of Barrett, Mitchell Robinson, Julius Randle, and Rose (once he is back), there is no one that has to see minutes. Thibodeau unfortunately in this instance is loyal to a fault and seems intent on going down with the likes of Alec Burks, Nerlens Noel, and Evan Fournier as long as they are at his disposal.

NBA teams are much like sharks—if they don’t move, they die. Right now, the Knicks may already be dead. That is how they play during stretches at least.

Even the best of the best make sure to retool, which would make no move at this deadline particularly jarring. It would indicate the front office has no true plan still other than preying for a star trade, a promise that has begun to feel like a mirage more than a mission.

Leon Rose has shown he can be as patient as a Shaolin Monk, and if there is not a deal to his liking, a deal will not be done. Having said that, if the team sticks with the current group in hopes of using the veterans’ contracts as expiring deals in an offseason star hunt, this season should be considered written off.

Play Within the Margins

Even though a star deal is still not out there for the Knicks, the urgency to clear out deadwood cannot be understated. Burks, Noel, Fournier, and especially Kemba Walker interfere with minutes that can be given to younger players with promise.

Walker and Burks are currently the team’s top two point guards and both simply get in the way of Barrett playmaking or someone like Immanuel Quickley, or to a much lesser extent rookie Miles McBride getting some run.

Walker is not the star scorer he once was and keeps the Knick offense a plodding halfcourt mess. Saturday night’s first half was the first time all season that unit got up and down the floor like a modern NBA team, and by the second half, they were sucking wind as the Lakers erased a 21-point deficit.

The starting lineup of Walker, Fournier, Barrett, Randle, and Robinson play at the slowest pace among lineups that have logged at least 300 minutes together. Things do not get any better when Burks fills in for Walker, the lineup plays at an even slower pace.

To add the cherry on top, both variations of the starting lineup get torched on defense, giving Thibodeau or the front office no reason to believe this trajectory could change.

Here is the good news: the front office has put out feelers that they are looking to move off some veterans clogging up the rotation. Bleacher Report’s Jake Fischer reported Walker, Fournier, Burks, and Nerlens Noel are available.

SNY’s Ian Begley reported last week that it does make sense for Burks to be the one most likely to garner attention from playoff teams, with the caveat that Thibodeau values him highly. Any Burks deal would be a Rose/Perry move and one that Thibodeau lives with after campaigning hard for Fournier in the offseason which has turned up to be largely a flop.

Speaking of Fournier, the time to strike a deal could be right now. Since Barrett’s rise to the top of the Knick food chain, Fournier has quietly found his three-point stroke. Since the new year, Fournier has connected on 46.5% of his three-point attempts on nearly eight attempts per game. That could be the type of ammo seasoned deal-makers Perry and Rose need to crawl themselves out of a signing some within the front office allegedly didn’t want to make in the first place.

Walker and Noel are far tougher sells. Barring a miracle, Walker will never reach the heights he reached in Charlotte. If the reported homecoming trade back to Charlotte for Ish Smith and a future second is legit, the Knicks must make that deal by 3:00 p.m. on Thursday.

Noel, simply put, is not worth the money he was paid. He came up big as the anchor of the defense last season. This season, though, Noel has had fleeting moments of effectiveness but has largely been the player that gives you anxiety when he has the ball in his hands. The hope right now is Robinson continues his ascension and rookie big Jericho Sims develops into the backup role Noel currently occupies.

The likelihood that all four veterans are dealt by the deadline is nonexistent. That is why Burks must be prioritized over the rest, and Fournier, too, if the opportunity arises. The reason why is simple: Quentin Grimes needs to play. The two-way sharpshooter has done nothing but impress in the minutes he has been given.

Since Christmas, Grimes has averaged 20.8 minutes per game off the bench and knows his role well. Of the 6.4 field-goal attempts he has averaged during this stretch, 5.0 have come from beyond the arc, where he is shooting 35.6%. His low-maintenance sharpshooting combined with his gritty defense makes him the ideal piece to slide next to Barrett as the third-year wing continues an ascension of his own.

Barrett’s statement showing on national television versus LeBron James and the Lakers hammered home a point those in New York (and Zion Williamson) already knew: this is RJ’s team.

Barrett brought out his full bag in Los Angeles, giving a peek into what is possible when he plays at his maximum potential. The only thing standing in the way of Barrett being a consistent 20-plus point-per-night scorer is his free throw shooting. He is averaging a career-best 4.7 attempts from the line; however, Barrett is shooting 69.3%. Small wart aside, it is abundantly clear the team should be building with the goal of maximizing Barrett.

Julius Randle fits into those plans of maximizing Barrett—but he can also fit into those plans another way. If the Knicks do have to part with one of their top players, there is no longer a debate that it would be Randle.

De’Aaron Fox’s name has been floated around. The quick-driving Kings guard has been prevalent this trade season as it appears the Kings are once again going to reset. The real question with a Fox deal is about the commitment, not the talent.

Fox immediately becomes the most talented young guard the team has had since high-definition existed. His price tag is where any cold feet scenario would come in. Fox’s extension keeps him under contract through 2026, maxing out at $37 million a year. Such a commitment would mean the team sees Fox as one of their two best players on the team.

Moving on from Randle so early should be heavily considered, too. It’s obvious that last season was very well Randle’s apex. But even at his current level of play, he is a versatile enforcer with the strength to bully anyone. Randle also signed a very team-friendly deal that maxes out what the team would start out paying Fox at. As frustrating as the season has been, Randle should be given patience, and if he must go it must be for a player that would no doubt elevate the Knicks.

Donovan Mitchell is that guy. Bradley Beal will stay a Wizard or find his way to a team that is better set up to win a title. Daryl Morey wants James Harden and only James Harden for Ben Simmons. Karl-Anthony Towns has a nice big three of his own with D’Angelo Russell and Anthony Edwards. Mitchell has Rudy Gobert and a cast of characters in Utah that may have peaked already.

There is already word that Mitchell and the Jazz are a quick playoff exit away from a divorce. There has been static between Mitchell and Gobert for some time, building the potential for the situation to get toxic quickly the next time the Jazz hit a pressure point.

The New York ties run deep, as we all know, with Mitchell, who makes crystal clear during the baseball season. He also happens to be the exact type of scorer that can not just co-exist with Barrett but thrive alongside him.

Monitoring the Mitchell situation should also be the only reason for not doing an all-out fire sale of veteran players. The Knicks should still make moves while keeping an eye on the future.

Unlike in former down years of the past, the young players the team hopes pan out are already showing results. Barrett, Robinson, Grimes, Immanuel Quickley, and Obi Toppin have all shown they can be productive. Reddish has flashed signs and is worth a hard look.

The team may still be a year or two away from achieving their master plan, assuming there is one. Lack of movement at the deadline would only lead to that very question to be raised.

Part of establishing a winning culture is, wait for it, winning. This is a losing group led by guys that do not figure into future plans. If the team is going to salvage anything at this point is developing the youth.