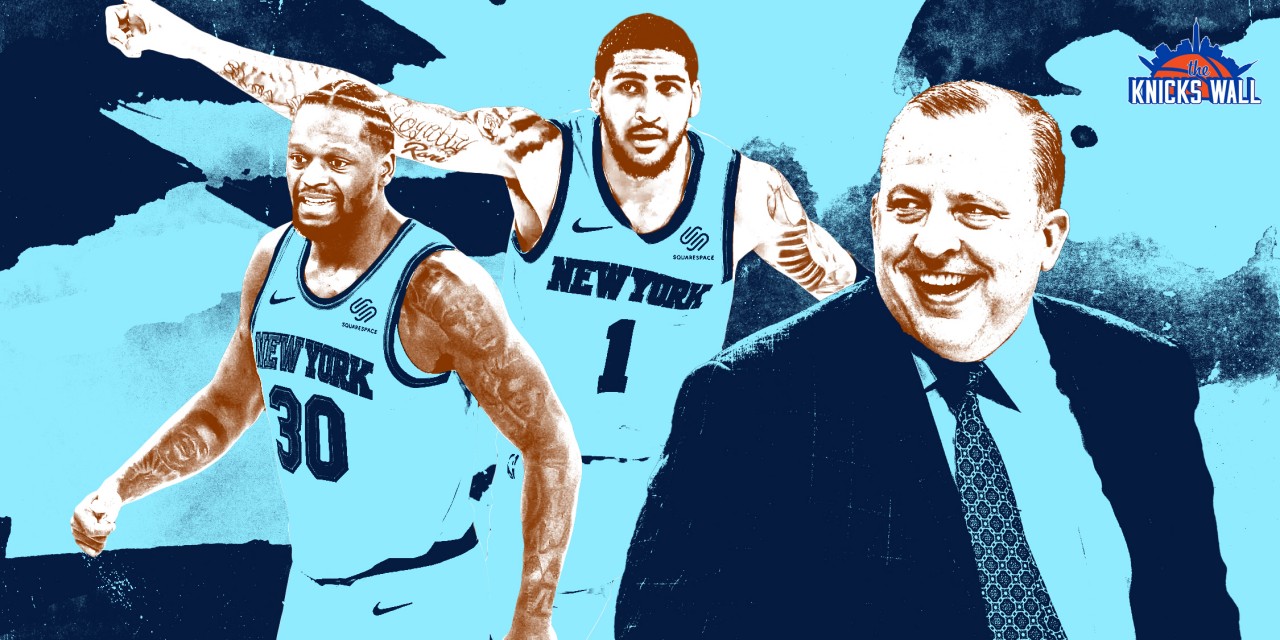 Commendably above .500, the Knicks have the opportunity to not just reach the postseason this year but remain a contender for years to come.

Stop me if you’ve heard this one already, but get this—the New York Knicks are good again!

Okay, with a record of 19-18, good might be overstating the matter, but at the very least, the Knicks aren’t terrible again, which in itself feels like a massive win.

Tom Thibodeau has largely delivered on instilling the values his somewhat tarnished reputation suggested he would when the Knicks hired him this offseason. He slowed the pace down to a crawl and turned a team full of mediocre-to-average defenders and young guys (plus the absurdly awesome rim-protecting tandem of Mitchell Robinson and Nerlens Noel) into a top defense in the NBA. In other words: practically overnight, he somehow managed to turn a “gutted, rudderless roster” into a quintessential Thibs team.

For a fanbase conditioned over the past 20 years (with a few exceptions) to expect incompetence, and often to root for it, this sudden transition from empty platitudes about chasing playoff spots to genuinely fighting for them is enough to give an entire city emotional whiplash. After all, Knicks fans are now being asked to switch from rooting for losses and checking Tankathon after every game to actually viewing wins as a thing to be desired and checking playoff seeding after every game. Players are now to be viewed as on-court contributors, rather than either prospects who will hopefully become contributors in the future or else trade bait. Frankly, it’s a little exhausting.

But it’s not just the fan perspective that’s going to have to change. The sudden re-emergence of New York Knicks: Playoff Team has to shift the way Leon Rose and top brass view the roster. A prime example of this will be what the team does at the trade deadline. Given the cornucopia of one-year deals the front office either signed, picked up, or traded for throughout the offseason and first half of the year, it seems pretty safe to assume Rose and Scott Perry expected to be sellers this year in much the same way as they were last year with Marcus Morris. And they may still be! Alec Burks and Reggie Bullock remain the prime contenders: both have a skill set a contender could covet and have largely disappointed after a hot start. Burks has averaged 9.4 points on 33.3% shooting from three and 39.3% overall in his last 10 of 25 games played, while Bullock, as a starter, has only scored double-digit points twice since January 22nd.

But with the team in the middle of a playoff race—they’re currently a half-game out of fourth place and three wins out of 10th—the chance of dumping a contributor for a second-round pick (or two) that won’t help this year’s team seems less likely. There’s still the possibility of a deal for a younger player who will be under team control for longer, but even that comes with a newfound contribute-now calculus that hasn’t existed in previous seasons.

The team’s success, relative though it may be, could also mean some tough conversations on the horizon about the younger, less experienced players on the roster. We’ve already seen Kevin Knox and, until recently, Frank Ntilikina banished to the Shadow Realm. Obi Toppin is one of six lottery picks from the offseason who has played fewer than 350 minutes—Killian Hayes, Onyeka Okongwu, Jalen Smith, Kira Lewis Jr., and Aaron Nesmith are the other five, and the first three spent major time out with injuries.

Toppin, too, dealt with an injury that caused him to miss 10 games, and he’s appeared in all 27 games for which he was available but has averaged a mere 12.7 minutes a night. Mitchell Robinson has missed the last 10 games with his fractured hand. The team hasn’t missed much of a beat, given his lack of involvement offensively and Nerlens Noel replicating his defensive impact, which prompts questions about his future given his impending free agency. All four of these players represent interesting inflection points for a front office that will (or at least should) have to navigate the tricky tight-rope walk of developing a young team for the future while competing for the playoffs in the present.

Now, the last thing the Knicks should be trying to do is skip steps to artificially accelerate the growth of a team that’s not ready for it. Just ask Lloyd Pierce, or the Jeff Hornacek Suns, or really any Knicks team of the last five years how that turns out. But make no mistake, there are still very real decisions to be made for each of these players.

Like Robinson, Ntilikina is up for a new contract this summer, and, outside of his absurd and unsustainable 61.9% mark from the three-point line, hasn’t shown much development in terms of his aggressiveness on either end of the floor. But given his defensive prowess, age (at 22, he’s almost five months younger than Toppin), and apparent shooting improvements, there are probably teams that would be willing to part with some kind of draft asset to try him out, especially if he were paired with a more known commodity like Burks. Knox, after two years of not looking like an NBA player, has similarly shown that he’s at least an end of rotation guy with size, shooting, and some fledgling passing instincts; a combination that, along with his draft pedigree, could cause a team to come sniffing around.

But the biggest question that the team will need to answer moving forward revolves around their most recent top-10 pick. Like Ntilikina and Knox before him, Toppin came into the draft with major question marks and hasn’t done a ton to answer them in the first half of his rookie season. Toppin was supposed to be the most ready-made offensive player in the lottery, yet in his first 27 games, he’s looked anything but. Say what you want about utilization and minutes (and there is certainly plenty to say about both), but the fact is Obi just hasn’t been very good in his time out there. Outside of R.J. Barrett, we’re used to saying that about the Knicks lottery picks of late—but the difference is that for the most part, those lottery picks have been some of the youngest, rawest players in the league when drafted. Obi is a different story.

But the question is, will the front office have the patience to wait for it? And even if they do, with the blossoming of Julius Randle into an All-Star getting 36 minutes a night, is there room for the developmental reps needed to get him there? The truth is, if the front office decides to extend Randle or re-sign him once his three-year deal is up, the most responsible thing to do from an asset utilization standpoint may be to trade Obi while he still has the luster of a top-10 pick on him.

Now, “trade” does not equal “dump,” but given his positional overlap and questionable ability to play with the team’s 26-year-old star, consolidating him and some of the team’s other assets for a better fitting piece makes a lot of sense. One example: the Knicks are projected to have three top-32 picks in a draft chock-full of enticing prospects. Given that the two first-round picks are currently in the 18-to-20 range, combining two, or even all three of those picks with Toppin could be enough to move up to somewhere around the top 10. That package wouldn’t be enough to move into the coveted top five, but it’s possible the Knicks could see one of the players available at 10, players such as Corey Kispert, Moses Moody, Franz Wagner, Jaden Springer, or Sharife Cooper, as the missing piece needed to fill out the picture around Immanuel Quickley, Barrett, Randle, and Robinson if he’s extended.

None of this is to say that the Knicks have to trade Toppin, or Knox, or Ntilikina. But with all three top-10 picks facing uncertain futures on the team, these are conversations the front office is going to have. The team as it stands boasts the 14th-youngest record in the league, meaning they’re almost exactly average, but every single player over 27 on the roster is either on a one-year deal or only has one year guaranteed. That sort of flexibility gives them a lot of freedom, but it also means they’re going to have to make some major decisions regarding team direction sooner than you might think.

What Thibs has done with the Knicks in 36 games is impressive. With only three long-term pieces in the starting lineup, and despite the absurd reliance on Elfrid Payton, the coach has managed to figure out how to make a winning team based around Randle and Barrett—a task that seemed impossible as recently as last year. But the work isn’t over for the front office—in fact, it’s only just beginning. The task now is to continue that success while turning the roster into something sustainable over the long term.

With oodles of cap space and a massive draft surplus, there are plenty of avenues for Leon Rose to take to accomplish this, but it will require creativity and vision. So far, we haven’t seen much of that from Rose, outside of the draft-night machinations that led to the selection of Quickley, which was an unquestionable success. It’s only his first year in a completely new job, so a little patience is warranted, but the NBA is a field where patience is a very limited commodity. Windows close almost as soon as they open and a single misstep can tank years of careful planning.

If the Knicks want to capture this lightning in a bottle and continue their momentum, the time is fast arriving for Rose to shed the training wheels and earn his keep. Otherwise, we may be looking back on this unexpectedly fun season in much the same way we look back on the Knicks’ aughts playoff drought kicked off by the 2003–04 season: as a beautiful but ultimately doomed respite in a sea of sorrow.

»READ: Scott Perry and what’s next for the Knicks GM position