The Knicks Must Stay Away From Kawhi Chase 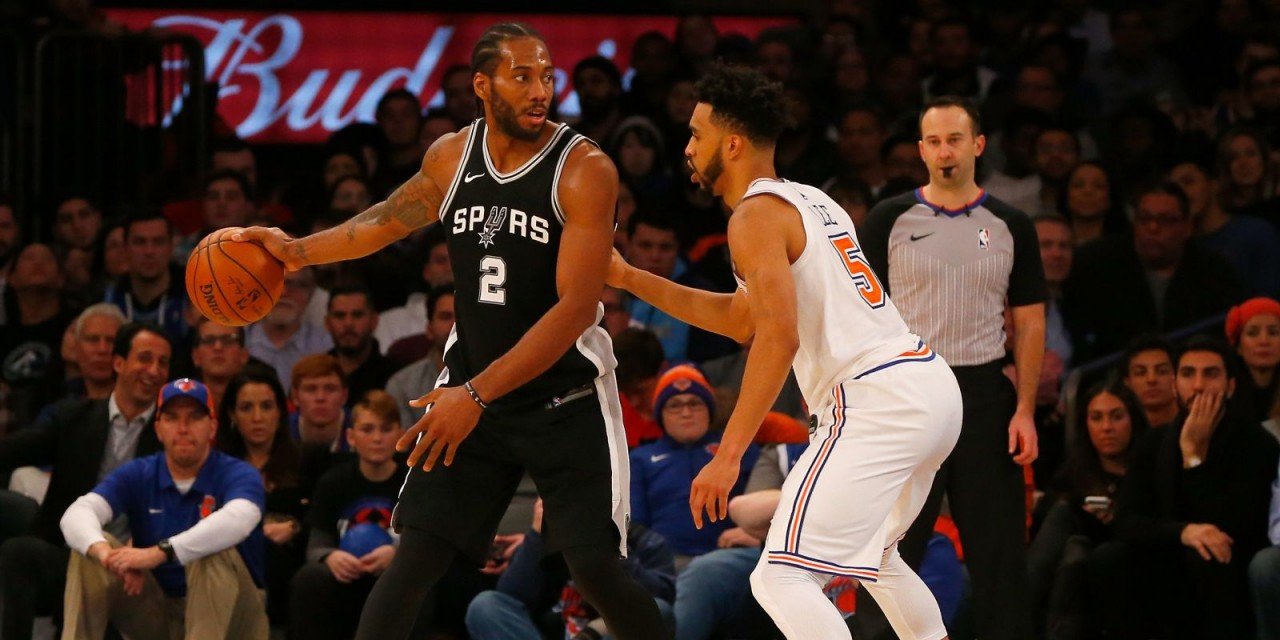 San Antonio’s Kawhi Leonard could be finding new real estate this summer, but the Knicks need to avoid being duped again, despite Leonard’s two-way prowess of years past.

Here we go again. The New York Knicks are minding their business, taking the right steps to build a winner the right way. They are close to hiring a new head coach and adding a lottery pick to join a core that shows promise. Then temptation comes knocking on the door yet again.

That temptation’s name is Kawhi Leonard. The 26-year-old superstar may want out of San Antonio and the belief among Spurs brass is Kawhi’s braintrust wants to him in a bigger market. One of the markets mentioned was New York.

Per ESPN’s Ramona Shelburne and Mike Wright piece on Kawhi:

“Multiple league sources also told ESPN that the Spurs have grown worried that Leonard’s group has an ulterior motive to fray the relationship and get Leonard traded to a larger market such as Los Angeles (Leonard’s hometown) or New York or Philadelphia (Robertson lives in New Jersey).”

Before you get drunk on the possibility of Kawhi and Kristaps Porzingis tearing the East apart, let me sober you up. This report came from the Spurs, who happen to still control this situation. The reasoning for the Knicks even being included is Kawhi’s uncle, Dennis Robertson, lives in New Jersey. There is no mention of the Knicks or New York from Kawhi’s camp.

In theory it sounds great, but in reality nothing about going after Kawhi makes sense. If the Spurs somehow listen to an offer that does not include the words “Kristaps Porzingis,” that would mean (multiple) draft picks and young players could be on the move. If you also recall, last summer the Spurs were among teams interested in dealing for Porzingis when Phil Jackson had finally lost his mind.

This screams of scam. Spurs GM R.C. Buford is no fool. If he wants to extract the biggest return for Kawhi, a bidding war is the best route. If the Sixers and Lakers—who both possess a larger chest of assets—decide not to play ball, the Spurs will be stuck holding their you-know-what.

That is where James Dolan comes into play. Dolan is known for his infatuation with star power. He hijacked trade talks for Carmelo Anthony in 2011 when then–president of basketball operations Donnie Walsh balked at the Nuggets’ asking price. The result was a gutted roster with ‘Melo, Amar’e Stoudemire and Chauncey Billups as the only pieces worth mentioning.

The Knicks are still carry the reputation of an easy mark and rightfully so. Countless times they have chased the big name in hope of that quick fix back to relevance. Carmelo ultimately didn’t work out. Kyrie Irving was never coming, and don’t get me started on LeBron. If that reputation is ever going to change, they will have to take a stand. Bowing out of the Kawhi sweepstakes before it even starts sends that message.

If Steve Mills is the team president he thinks he is, then now is his time to shine. He must keep the team on its current path and, most importantly, keep Dolan away from any possible negotiations. We have been sold a new era of Knicks basketball. So far, Mills and GM Scott Perry’s actions have followed that. This is just another step in the reclamation project.