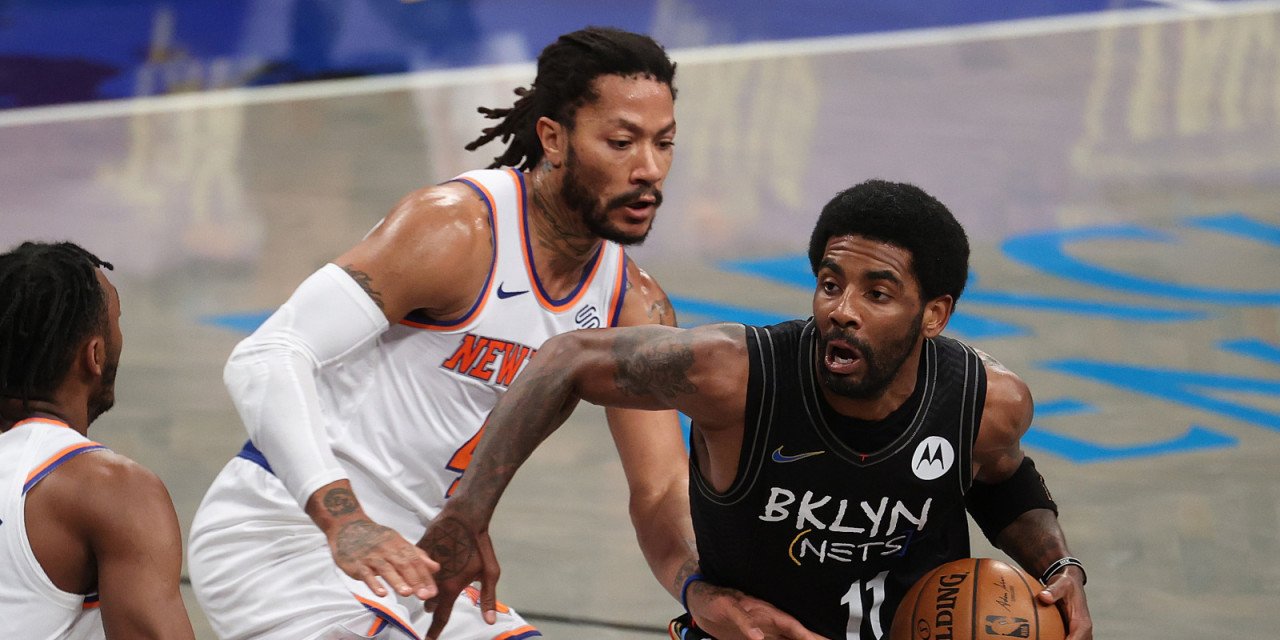 Kyrie Irving is reportedly available as free agency approaches, and the Knicks are one team in the mix for the polarizing star point guard.

According to a new report from The Athletic’s Shams Charania, Kyrie Irving and the Brooklyn Nets may be at a point of no return in negotiations regarding his current contract with the team, and it could lead to his departure.

The Los Angeles Lakers, LA Clippers, and New York Knicks were all named as teams that will likely pursue Irving if he were to decide to leave the Nets for a larger and longer contract elsewhere. Both the Lakers and Knicks are looking to improve at the point guard position, with the Lakers having to decide whether to see if Russell Westbrook improves under a new head coach and the Knicks seeing if they’ll be able to move in the upcoming draft to potentially trade up and take Purdue’s Jaden Ivey at the four spot.

Charania calls the situation between Brooklyn and Irving an “impasse,” with the latter considering his options elsewhere.

Irving has a very lucrative contract with the Nets. He could take the $35.6 million dollar player option or opt out and seek a five-year extension worth up to $246 million this summer. But the Nets may not be willing to make that gamble given how little Irving played this past season due to vaccine mandates in New York City, which caused him to become a part-time player. Between that and Brooklyn getting swept by the eventual Eastern Conference champion Boston Celtics in the first round of the playoffs, the Nets might be looking to rebuild, again, around their All-Star in Kevin Durant.

New York would need to offload some of their heftier contracts in order to make this type of deal work, but they have some interesting players in Evan Fournier and Alec Burks who can provide instant catch-and-shoot offense to the Nets.

Per Charania in The Athletic:

For the Knicks, the likely path to acquire Irving depends on what the Nets prioritize. New York is even with the salary-cap line for 2022-23 so it could clear enough space to sign Irving on a maximum contract by offloading salaries such as Evan Fournier, Alec Burks, Nerlens Noel and Kemba Walker. But the Knicks could also offer some or all of those players to the Nets or a third team in a possible sign-and-trade.

Irving is still an excellent point guard, averaging 27.4 points per game along with 5.8 assists in just part-time work with Brooklyn this past season. Over his career, he’s been known for his ridiculous handles and the ability to score at any time, any way he wants to, both at the rim and from midrange. He’d be an upgrade to any time he signed with, but the looming question for the last few years of his career has been surrounding his ability to stay healthy, or out of the spotlight, or simply interested enough to show up for games.

The risk would be worth the reward, especially for a team like New York that is in need of a veteran-type starter to steer such a young ship. But, this new front office has yet to really make any big splashes in either free agency or through the draft, so it’s tough to say if this is the big swing they’d be willing to take if the Lakers are looking to pursue Irving even more furiously.

All in all, New York definitely has options heading into the summer. Regardless of their ability to sign Irving, they still have pieces and picks to offer to move up and take Ivey, or possibly Indiana Pacers guard Malcolm Brogdon. They could also just hand their current young guard, Immanuel Quickley, the keys to the offense. It all depends on if they want to become an instant playoff contender in the conference by signing Irving or if they wish to keep developing their team through the draft until someone more appealing, and healthier, and more reliable, comes along. But the big swing is looming, and the ball is in the Knicks’ court to finally swing away.