Knicks Need to ‘Fix it Fast’ After Brutal Loss to Miami 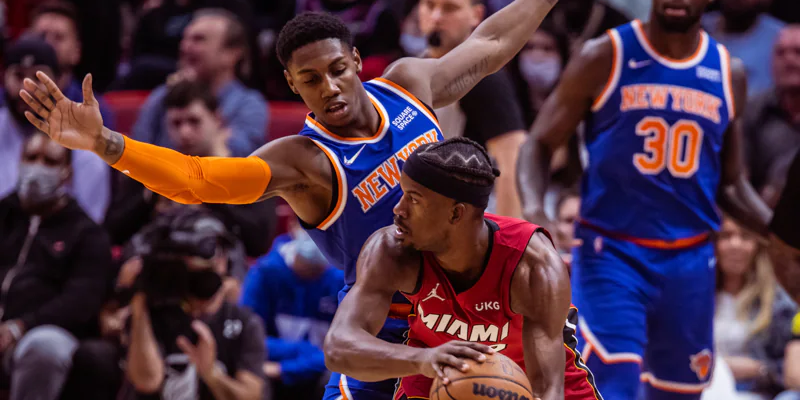 Tom Thibodeau spoke on the Knicks’ lack of tenacity and need to turn it around in a quick way following a devastating loss to the Heat.

MIAMI, Fla. — New York’s downward spiral continues. The Miami Heat ran them off the court and the New York Knicks were never able to make it a contest after the home team began the game on a 9-0 run. It was another low-energy effort from a Knicks squad that’s simply not bringing the consistency on a nightly basis. New York seems to not be able to get out of its own way—the team is pressing and they’re having a difficult time finding answers.

Head coach Tom Thibodeau alluded to the early struggles on the night. “We got in a hole early, it was hard to get out of that,” the Knicks coach said after Wednesday’s game. “We got back on our heels, they put a lot of pressure on us. If you give a team confidence like that early, particularly a team as good as this, you’re going to pay for it and we did.”

The Knicks only managed to score 16 points to the Heat’s 30 points in the first quarter, creating the hole Thibodeau mentioned. Scoring was a struggle for the Knicks the entire night. Outside of RJ Barrett, the starting lineup struggled mightily to put points on the board. For the second game in a row, and for the 19th time this season, Evan Fournier failed to reach double-digit points. The two highest-paid Knicks were once again unreliable, as Julius Randle’s struggles continued.

To go with a top-10 offense, Miami also sports a top-10 defense. This is a bad combination for the Knicks, who are sorely lacking in scoring prowess and are no longer the defensive juggernaut they were in the previous season. With Randle slumping, Thibodeau gave some insight on how he can still help the team in other ways while their leading man continues to figure things out.

“Players are going to go through things. There’s a lot of things he can do to help us—defense, rebounding, pushing the ball, attacking the rim, and making reads,” said Thibs. He remains confident that Randle can turn things around by doing the little things. “Oftentimes, it’s the hustle plays that get you going.”

It was a particularly bad night for some of the Knicks’ regular rotation players, noticeably Alec Burks. The veteran guard managed to score just three points after he laid a goose egg on Monday against the Cleveland Cavaliers. “The challenge for us is we got to get everyone playing well,” Thibs said.

However, it seems like those chances are few are far between. He continues to trot out the same rotations without much change unless his hand is forced, which usually comes in the form of an inauspicious injury rather than merit. Until the coaching staff makes real changes to the lineup, questions about the rotation will persist. Thibs tends to pull the plug on guys way too late and his indecision has cost the team on multiple occasions during the season.

The Heat gave the Knicks more than they could handle, as three of their starters scored double-digit points. Tyler Herro, a favorite for the Sixth Man of the Year award, came off the bench and torched the Knicks for 21 points of his own. Second-year big man Obi Toppin had one of the better outings of his career, scoring a team-high 18 points on an efficient 7-of-9 shooting.

This was a litmus test for the Knicks and they looked way out of their league. Toppin touched on the Knicks’ lack of intensity to start out games, something that has plagued the team all season. “I feel like we didn’t bring the energy from the jump but we know what we got to do,” said Toppin. “We’re going to learn from this loss and get better from it.”

Some of the Knicks’ most prevalent issues reared their ugly heads last night, like the lack of enthusiasm to start games and the coach letting things get too out of hand before making the proper adjustments.

New York needs a shot in the arm in the worst way as the schedule becomes increasingly more difficult. With the trade deadline around the corner, a surprise splash might be exactly what they need to jumpstart the remainder of the season because this group just doesn’t have it right now.