The Knicks Need RJ Barrett and Julius Randle Thriving Together 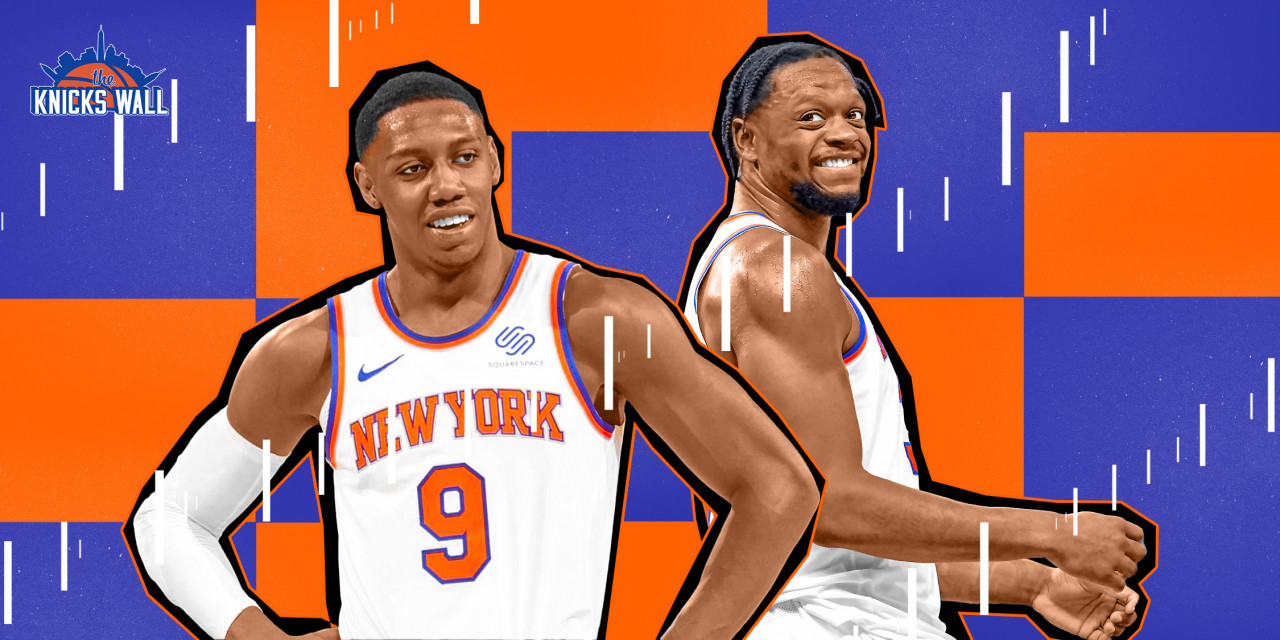 At times, the 2022 Knicks have felt like Julius Randle and RJ Barrett passing the baton of leadership back and forth with no cohesion. The rest of the season will depend on finding a successful balance.


With an unsuccessful trade deadline behind us, the New York Knicks must reorganize their priorities after the All-Star break to make this season a successful one. Playing the youth is an easy one; figuring out what you have amongst the likes of Cam Reddish, Immanuel Quickley, Quentin Grimes, and the likes allows New York to figure out how to properly order them in the event a trade comes to fruition in the offseason.

The veterans and coaching situation will have to wait. The cost of holding at the trade deadline means Alec Burks, Nerlens Noel, Taj Gibson, and a returning Derrick Rose will be in line for minutes as New York potentially chases a play-in spot. Meanwhile, Tom Thibodeau’s job security has come up and while there are valid arguments for his departure, the Knicks will most likely give him the rest of the season to figure it out. Both situations should be handled in the offseason.

The biggest area to figure out is the RJ Barrett–Julius Randle dynamic. Last season saw Randle ascend to All-NBA status, navigating Tom Thibodeau’s offense to a 41-win (72-game) season. Barrett, for a lack of better words, was a passenger, largely assuming a catch-and-shoot role with the occasional gleams of success as the lead offensive threat. Now, as Randle’s star dimmed and Barrett’s offensive influence grows, figuring out how to properly rebalance the offense is in order.

With Randle starting his four-year contract extension next year (and being a bit of a negative contract to start) and Barrett most likely breaking the Charlie Ward curse this offseason by signing a contract off of his rookie deal, the Knicks will have both players on the roster for at least the next two seasons before any real movement can be made. Both have had success individually at points this season, but the ultimate question remains can the Knicks get both Barrett and Randle going together and how does that look for the future of the Knicks?

The easiest point to start is looking at their offensive roles. Randle remains the Big Dog of the offense—absorbing the majority of possessions, maintaining a high usage rate, and taking the majority of the big shots. Unlike last season, however, Randle has seen his efficiency fall off a cliff, to the point where Knicks fans swiftly wanted him traded. As for Barrett, he continues to take another small chunk of the offense for himself, only this time, we got to see him without Randle for stretches, where he looks better. Ideally, getting some of the extra Randle possessions and shifting them to Barrett would be ideal.

For Barrett, continuing to work with him on the ball is key. Per Cleaning the Glass, Barrett is still assisted on 93% of his three-point makes this season, which suggests that he’s still a bit dependent on others to create outside shots. However, he’s about 40% assisted on two-point shots, via NBA Stats. He’s getting more active as a driver and is even shooting 60% at the rim. Proper progress. Regardless, the next phase of his development is to continue to work with him as an on-ball player.

Operating as a pick-and-roll ball-handler is the way to go here. A solid passer and balanced ball-handler, Barrett’s ability to create for others could be maximized as more of a creator in New York’s offense. Getting him the ball and allowing him to attack downhill could do wonders for his future development. Expanding his game allows him to develop to grow similar to the likes of Boston’s Jaylen Brown.

As for Randle, the seventh-year player has fallen back to where we were in 2019–20, suggesting that the 2020–21 season was a bit of a mirage. If so, I would like to see Randle work a bit more as an off-ball player. A catch-and-shoot threat has mostly waned, due to his plummeting three-point shooting. However, I think Randle should shine as a roll man for the pick-and-roll. Not only would the Randle roll have a bit more gravity than the 30.6% three-point shooting would suggest, due to his passing ability, but it helps both Barrett and any of New York’s point guards if they had an ideal partner to run pick-and-roll.

While his position in the starting unit has been questioned, Kemba Walker would be a beneficiary in this scenario. A push to run more pick-and-roll would help Walker, whose most successful stretches in New York came with him attacking the middle of the floor and operating a heavy load of pick-and-roll work. The same for Immanuel Quickley, who has shown some usefulness in attacking titled defenses and attack getting into the paint. It would take some sacrifice from Randle, but it would ultimately help the team.

Both players have their own ways of scoring and generating offense, but to take another step forward, Randle should be utilized more like a roll man who can help follow point guards and increase his opportunities against a tilted defense, Barrett should be encouraged to be used more on the ball duties, allowing him to further develop into a lead offensive threat.

The Next Steps: Who To Play Around Randle and Barrett

As we figure out how to better improve the players and their success amongst an offense, the players around them largely matter. Tom Thibodeau will ultimately make (the wrong) decision here, but New York will have to figure out which players work best around Randle and Barrett. Knowing Thibodeau, that means some Derrick Rose, a dash of Alec Burks, and a pinch of Taj Gibson.

Ideally, the Knicks need some three-point shooting and defense around both. Barrett has continued his development as a defender; capable of defending bigger wings, smaller forwards, and holding his own on the perimeter. The shooting is key because Randle and Barrett have taken a considerable step back as shooters from the 2020–21 seasons, suggesting that they won’t be 40% shooters from the outside.

I’d also be remiss if I didn’t mention the need for a point guard here. Ideally, one that can attack the basket, break down the defense and also carry a considerable amount of the offense. New York’s biggest need heading into the 2022 offseason will be a point guard who can help diversify the offense.

As for now, the best lineup to help build these two up offensively is Immanuel Quickley, Quentin Grimes, RJ Barrett, Julius Randle, and Mitchell Robinson. Robinson serves as the best center option, as his defense and ability to recover and clean up any mistakes allows for some defensive mishaps from the young guys on the perimeter. The fourth-year center also doubles as an excellent lob threat who can give New York’s offense an above-the-rim element.

Where Quickley and Grimes work well are their 3-and-D like abilities. Despite being in a current slump, Quickley has flashed effective tendencies as a pick and roll player and already has the ability to draw fouls at the rim. Combine that with solid outside shooting and defense and you have a player who can work both on the ball and off the ball around your offensive pillars in Randle and Barrett.

Meanwhile, Grimes has all the makings of the quintessential 3-and-D guard. His frame allows him to defend smaller guards and average wings and he doesn’t waste possessions on the offensive side of the ball. While I worry about his ability to create his own shot, he isn’t completely inept with the ball in his hands; capable of attacking a closeout and already he has shown the ability to find an open man. Grimes working off of Barrett and Randle seems like an ideal option.

One of the most frustrating things about this season has been Thibodeau’s reluctance to even tinker with the rotation. Leaving Walker in the starting lineup, not giving Grimes a chance sooner or the hesitation in giving Quickley large minutes at the point guard position—all are subplots to use for the case in firing the former Bulls and Timberwolves coach. With an All-Star break to regroup and adjust, perhaps the Knicks can get more creative in the second half and one way would be using this lineup.

The Knicks feel directionless. They feel caught within two worlds—rebuilding themselves by loading up with several different young players to give them a chance to find key contributors as a fraction of the price and attempting to contend by battling it out for another postseason appearance led by mostly veterans. The Knicks aren’t this bad, but that best of both worlds mentality has only got them stuck in the middle of the pack as teams like Cleveland and Charlotte have taken massive steps forward this season.

So we look forward to the rest of the season. The “play the kids” mantra, while the correct one, has begun to fall short for me, especially when the voices are as loud for someone like Jericho Sims as they are for Immanuel Quickley. Though Sims is a nice long-term project, I find the bigger issues to be not playing the player you spent a first-round pick for or the guy who averaged 20 points per 36 minutes last season to be much more problematic. Throwing every young kid out there doesn’t help as much as establishing a few and continuing from there.

For New York to get back on track, a bigger focus on the Julius Randle–RJ Barrett dynamic should be examined. While Randle remains the better player, Barrett’s emergence this season only lends credence to those who believe he will assume the role of the best player on the Knicks in time. To both help, Barrett gets there, as well as help Randle get closer to his 2020–21 form, the coaching staff should put more of an emphasis on that duo, including who goes around them in five-man lineups, where they could improve and just exactly who can help them this upcoming offseason.

There are plenty of opportunities for the Knicks to salvage this season and getting RJ Barrett and Julius Randle on the right track together and have both playing well at the same time would bode well for the future of the team, even if the direction at the moment appears murky at best.