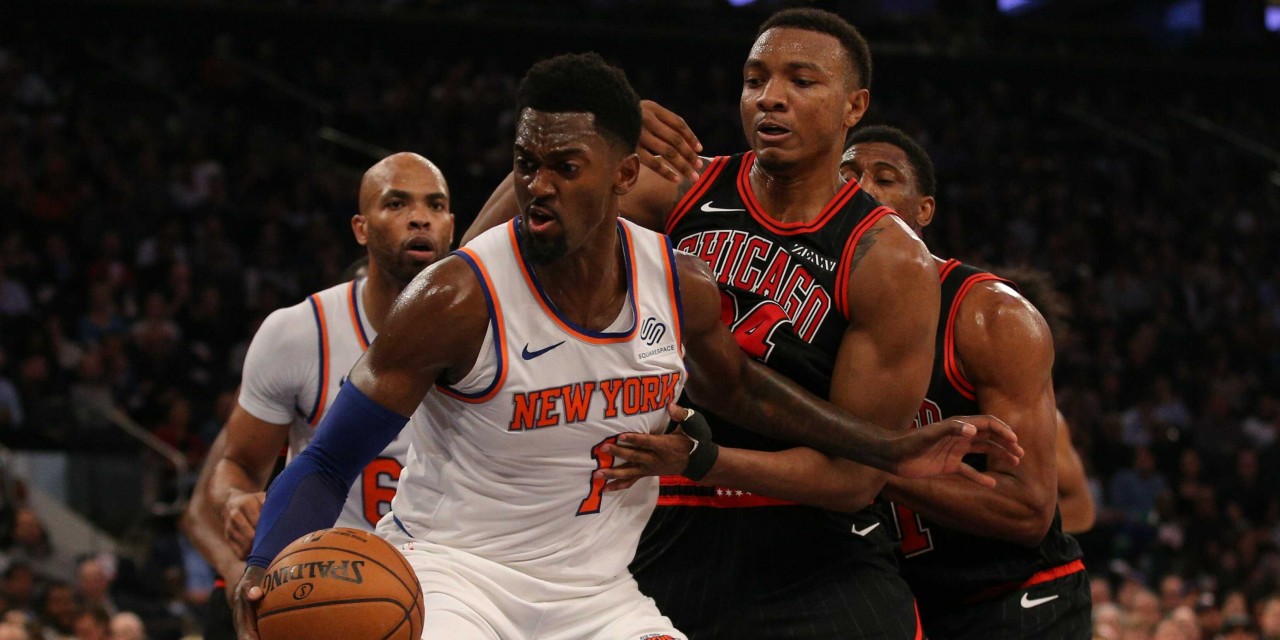 Bobby Portis erupted for a huge fourth quarter against his former team, the Bulls, in the Knicks’ first victory of the season.

After three gut-wrenching losses, the Knicks finally smashed that egg in their win column, beating the Chicago Bulls 105-98 at the Garden. The Knicks scored 15 uninterrupted points over the last three and a half minutes to secure the victory.

Although the ending of the game was sweet, the beginning was sour. After the first quarter, the Knicks found themselves down 18 points while shooting 6-of-22 from the field and forcing zero turnovers.

The Knicks opened up the second quarter with an 8-0 run backed by a pair of triples from Wayne Ellington but didn’t draw very close until the fourth quarter. New York closed Chicago’s nearly game-long lead to a tie with 6:09 remaining. A Bobby Portis three-pointer put New York ahead by two with 1:47 left in the game. The Knicks kept the lead the rest of the way.

Portis, who spent his first three seasons with the Bulls, provided a gigantic spark off the bench for the Knicks. He made three straight field goals in 90 seconds in the first quarter. He had another flurry of buckets in the third that came against former Knick Luke Kornet.

Tonight was undoubtedly Portis’ best showing in the orange and blue. His defense was solid and he finished with a game-high 28 points as well as 11 rebounds and two blocks in 30 minutes. He shot 10-of-14 from the field and 4-for-4 from behind the arc.

As Portis got buckets, Mitchell Robinson was busy on the boards, collecting four rebounds in the first three minutes of the game. He was tenacious on the offensive glass all night and finished with nine rebounds in 18 minutes. Robinson also provided New York’s first points of the game by swishing a seven-foot jump shot, his second field goal that came from outside the paint in four career tries.

R.J. Barrett started off rocky but found his groove in the second quarter, completing a couple of difficult finishes. He recorded his first career double-double, finishing with 19 points, 15 rebounds, and five assists. Once again, Barrett took it to the rim with veteran-like composure.

While New York bullied their way to the hoop, Chicago came out looking to push the pace and shoot threes. Their first five shots came from behind the arc. They drove and kicked it out to shooters time after time throughout the game, but only converted nine of their 35 attempts from three.

Chicago’s pacing also produced problems for New York. The Bulls looked to beat the Knicks back up the court every possession. The Knicks’ fast-break defense was decent, but still was unable to contain the Bulls’ charge on several occasions.

The Bulls’ perimeter defense for the first three quarters was suffocating. Their constant double teams on every screen slowed down ball-handlers and they contested nearly every shot. However, their defense was picked apart down the stretch as their intensity faded.

Frank Ntilikina saw three minutes over the team’s previous three games, much to the displeasure of the fans. Tonight, however, he was in the first substitution and played 22 total minutes.

As always, Ntilikina’s defense was relentless. He forced an eight-second violation to start the second quarter and skirted around screens with ease. But, per usual, he contributed almost nothing offensively, finishing with zero points on 0-of-6 field goal shooting and just two assists.

It’s unclear how many minutes Ntilikina would have seen if Dennis Smith Jr. (personal reasons) was available, as he seemed to be slotted at backup point guard. Starting point guard Elfird Payton suffered from hamstring soreness in the third quarter, which provided Ntilikina the opportunity to play in crunch time.

Allonzo Trier, who started in New York’s first game, was available but did not play. Damyean Dotson and Ignas Brazdeikis also did not play.

Lack of ball movement has been a huge criticism of David Fizdale, but tonight was a step in the right direction. The Knicks showed more movement, as well as more off-ball movement, but it wasn’t very effective until late in the game. Chicago’s ferocious defense halted any penetration and denied the Knicks’ passes off the pick-and-roll.

Turnovers were another area of concern. Fizdale said that the team committed too many turnovers in their prior game, a loss to the Boston Celtics. Coming into this game, the Knicks were tied for most turnovers per game in the league with 21.3.

The Knicks were able to hold their turnovers to 17 tonight. Julius Randle, in particular, was guilty of committing an abundance of turnovers and fumbled eight times on Monday.

The Knicks’ free throws shooting was also terrible, converting on just 20 of 32 attempts from the charity stripe, a 62.5% clip.

Still, New York was able to pull off their first victory. The Knicks are back in action Wednesday against the Magic at 7:00 p.m. EST.