Knicks Take on Nuggets as Road Trip Winds Down 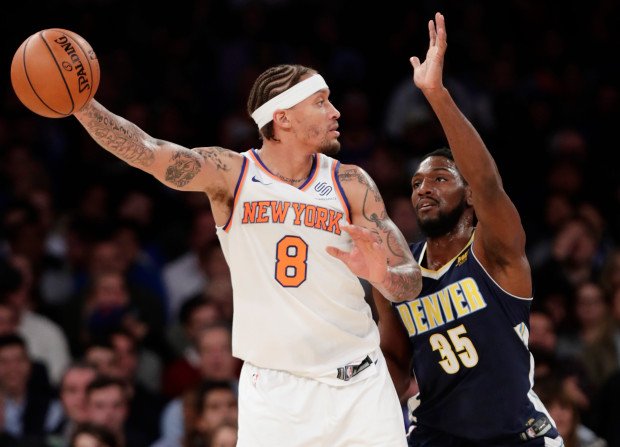 The road trip out West carries on with the Knicks in Denver to face Nikola Jokic and the Nuggets.

Following an up-then-down loss against the defending champs at Oracle Arena, the Knicks (21-27) head to high altitude to take on the Denver Nuggets (24-23) for the sixth game of their seven-game road trip.

First-time All-Star Kristaps Porzingis sat out of Monday’s game with an irritated left knee and is officially listed as questionable for tonight’s game. However, he indicated that his knee was feeling better after yesterday’s practice, per Marc Berman.

“My knee — I was limited in practice but almost did everything and it feels pretty good. What am I for tomorrow? Questionable for tomorrow, but I think questionable is 50-50. I would say like 74 percent.”

So armed with a 74 percent chance of seeing the first Latvian ever to be named an NBA All-Star take the floor, here are some things to watch for in tonight’s contest.

In the midst of the so-called “three-ball revolution”, the Knicks rank dead last with only 21.6 three-point attempts per game. As a team, they are seventh-best in the league with a 37 percent mark from deep. This goes to say that the Knicks need to be taking more shots from behind the arc.

And they have been since Tim Hardaway Jr.’s return. In games he’s played in since coming back from a stress injury to his left leg, the Knicks have shot 25.6 threes per game, which would be good for … just 25th in the league. At least it’s trending in the right direction.

The Nuggets, a top ten team in three-pointers attempted, will stretch the Knicks out with Jokic’s ability to shoot the deep ball from the center position and their duo of smooth shooting guards in Jamal Murray and Gary Harris. Coming off a day of rest, the Knicks will have to exert some energy chasing those guys around the perimeter; some energy that was missing in the second half of Tuesday’s loss against the Warriors.

The Battle of the Young Bigs

Kristaps Porzingis, Nikola Jokic, Karl-Anthony Towns, and Joel Embiid. These are the four young big men set to define the future of the league’s center position. As such, they have been inextricably linked through their short careers, drawing all sorts of comparisons.

Two of those guys will have the (74 percent) chance to match up on the floor tonight to fight for NBA supremacy. The last time KP faced off against Jokic, KP got the best of him with a 38-point outburst in a win.

Whoever comes out hungrier to prove their place among the NBA big-man hierarchy will likely decide the outcome of this game.

If Porzingis is unable to suit up, then Michael Beasley and Kyle O’Quinn will likely see an uptick in minutes. If that is the case, Beasley, coming off a 21-point effort against the Dubs, will be expected to share a large portion of the offensive burden.

The Knicks rule O’Quinn and Hardaway Jr. out. O’Quinn was also inactive in Tuesday’s Warriors game, and New York had recalled second round pick Damyean Dotson from the G League for tonight.