The Knicks’ Offseason, 2020–21 Season May Be a Whole Lotta Waiting 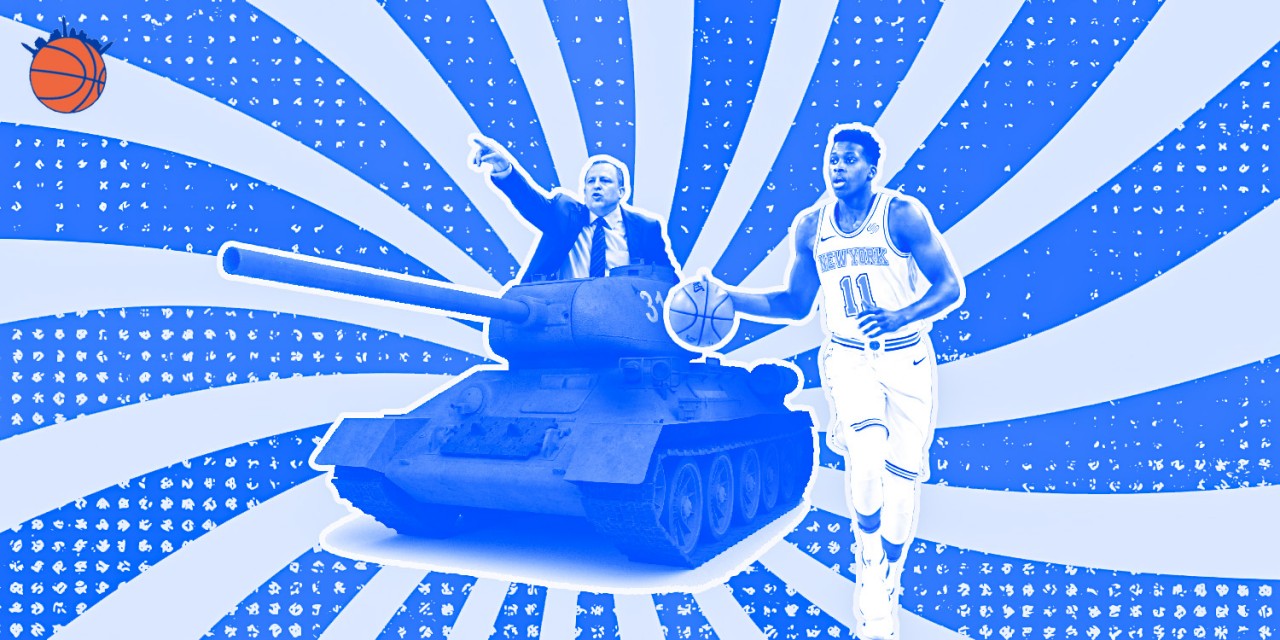 Given the financial situation of the NBA and the overall draft class, it would not be hard to believe Knicks President Leon Rose waits out splashy moves for the franchise.

If one word were to come to mind in the aftermath of the New York Knicks hiring Leon Rose and William “World Wide” Wes, it might’ve been “dealmaker” or “CAA”—or maybe even “CP3.” A word that probably wouldn’t have made the list would be “patience.”

The assumption was, and perhaps still is, that you don’t hire such well-connected and renowned movers and shakers for them to sit on their hands and let the board play out as it will. (Rose’s client list as an agent for CAA is a testament to his ability to attract high-end talent: LeBron James, Carmelo Anthony, Devin Booker, Joel Embiid, Allen Iverson, and Richard Hamilton make up the high-end of his former signings and helped form the reputation he has today.)

That may very well be true. The rumblings about Chris Paul, and the fainter whisperings about basically any other current or former CAA client, get harder to ignore the closer we get to some kind of offseason, in whatever form that may take. They make sense—with the completely blank slate that is Leon Rose, the logical thing to do is extrapolate what we do know about him to try to predict what his approach as an NBA executive might be. And what we know about Rose is that he’s a guy who gets things done.

But while his track record since taking the Knicks job is the definition of a small sample size, there is information to be gleaned, and that information paints the possibility of a different picture: one defined by patience and careful consideration as Rose navigates his first year on the job.

The first indication of this possibility was when Rose picked up Scott Perry’s option in order to retain him for another year as the team’s general manager. Many assumed that Perry’s departure would follow shortly on the heels of Steve Mills’ dismissal/reassignment within the Madison Square Garden hierarchy, but Rose opted instead to keep Perry on for another year. This seemed to serve a double purpose: it will allow Rose to evaluate Perry as a decision-maker absent the presence of Mills (many reports indicated the two executives were frequently in disagreement in terms of approach and potential moves), while giving Rose a year of status quo to make his next front-office decision once he has a little more experience on the job.

While it may not be as sexy or headline-catching as a Chris Paul trade, there’s a decent chance Rose pursues a similar strategy in terms of team-building this offseason. After all, the Knicks’ season ended only a week after Rose’s hiring, as he mentioned during an interview with Mike Breen: “I was disappointed from the standpoint that one of my main goals walking in the door was to be able to evaluate the team and the situation in order to make decisions,” Rose told the MSG Network broadcaster in June. “Obviously that got sidetracked as a result of the pandemic.”

This winter will offer a draft that lacks tier one, franchise-changing prospects and a free agency class that lacks available superstars, which could allow Rose a more pressure-free avenue to stay the course and really see what pieces are worth building around and in what way. Add to that a relatively unprecedented amount of financial insecurity league-wide, and the reasons to not make any major moves become even clearer. ESPN’s Bobby Marks, a former NBA executive, has predicted that as many as 29 of 29 players with player options could potential opt in this offseason, and that it’s entirely possible we will only see one-year deals as both teams and players try to navigate what could be a frigid market. With the Knicks being one of the few teams with plenty of cap space and no player options to worry about, they could be uniquely situated to take advantage of cheap owners looking to shed salary for tax reasons (hopefully Rose has a direct line to Robert Sarver), gaining assets for the use of their cap space this season.

At every available opportunity, Rose has stressed the idea of not trying to rush things. Take a look at how he ended his introduction to the team and fanbase in March:

When asked by Breen how he and the Knicks could eventually be able to start signing elite free agents, he responded: “What we have to create is an environment where players are going to want to come here, and the way to do that is on the day-to-day with the players that we have, with the organization we have, and making sure that every aspect is going to be player friendly, it’s going to be first-class, we’re going to work as hard as we can to show people that this is a place that you want to be at. I mean, we have the greatest city in the world, we have an iconic arena, and we just need to create culture that people are going to want to be part of.”

That could very well be more of the type of lip service we’ve heard in the past from the likes of Mills and Perry, both of whom emphasized not cutting corners and building the team the right way—before proceeding to cut corners en route to building a rather dysfunctional roster. But there is reason to be optimistic that this philosophy is more than just words coming from Rose.

“We have not set a timeline. We are taking it one day at a time,” Rose has been quoted as saying, via the New York Post. “At the moment we don’t know what the roster will be moving forward. We have decisions we have to make. The important thing is to instill the culture, focus on the development and take it from there.”

If there’s one thing that the inglorious tenure of David Fizdale has shown us, it’s that culture can’t be forced or rushed. It has to be organic.  It has to be grown naturally, often through pain and failure, since how we respond to pain and failure is key to how we can succeed in the future.

Make no mistake: Leon Rose was hired to bringing winning back to the Garden, and that will be his goal for as long into his contract as he lasts (history would indicate that it’s unlikely he makes it to the end). But how that winning will take shape is very much still in question. The Knicks, in a reflection of new leadership, are themselves something of a blank slate, with an abundance of draft assets, young players, and few financial encumbrances moving forward. R.J. Barrett and Mitchell Robinson have been name-dropped by Rose as team cornerstones, and neither are ready to lead a playoff team…yet. That’s another reason for patience.

Rose is also keenly aware that while it may be tempting to do something big and splashy in his first offseason as a team president, 2021 is the real prize, both in terms of the draft and free agency. Given CAA’s relationship with James Dolan over the years, it’s also likely that Rose enjoys a level of security in his job that’s unusual for Knicks higher-ups in the past, which could make him feel less pressure to constantly cut short rebuilding plans in futile grasps at the eighth seed, as the previous regime did.

But perhaps the most important thing to remember is that while for us as fans, this rebuild feels interminable, like trying to climb out of an ever-expanding Sarlacc pit, for Rose, Walt Perrin, and the development staff of Kenny Payne and Johnnie Bryant, this is year one. The Knicks shelled out a record-breaking amount to hire Payne, which seems to back up Rose’s constant talk about development being the most important thing.

So even though it may be hard to face yet another year of losing basketball, it may be time to come to terms with the possibility that the Knicks enter next season with no fundamental changes to their roster beyond a couple exciting new rookies and some fringe moves to add either assets or more veteran presence. It will be painful, but again, 2021 is the prize. With a new coach, a new front office, and a new development staff, a year to evaluate, improve, and lay a strong foundation could be exactly what the team needs to finally put a culture besides “toxic waste dump” in place.