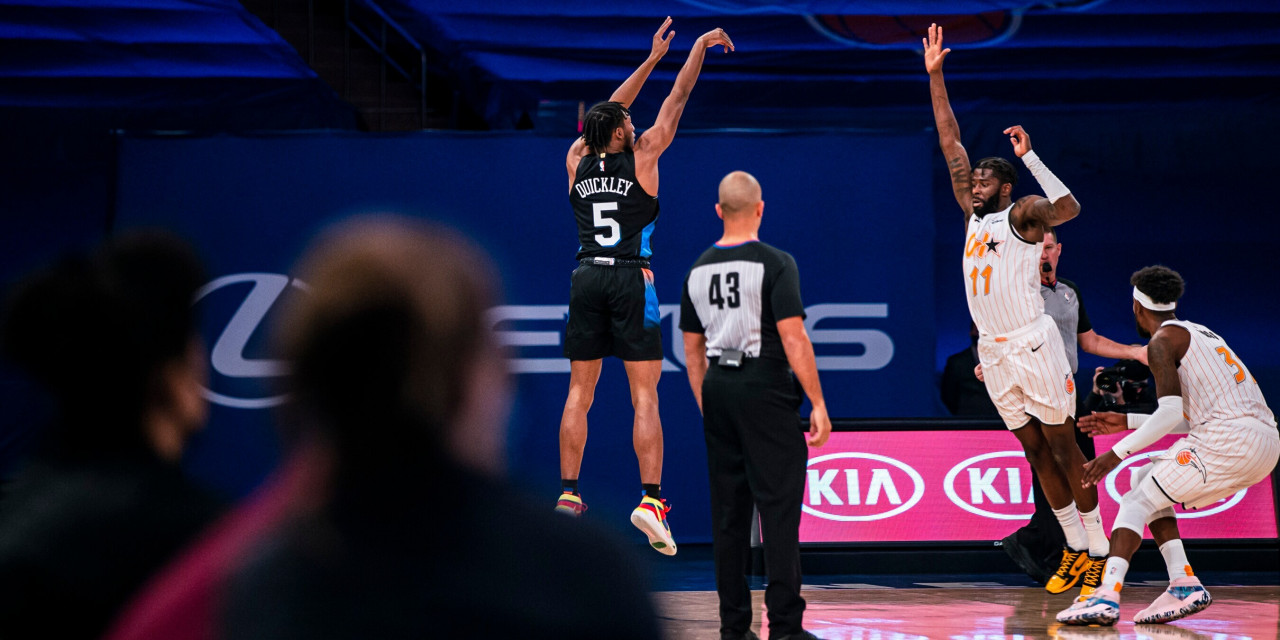 After a thrilling (and exhausting) Opening Night win over the Celtics, the Knicks hit the road and face the rebuilding Magic in Orlando.

It’s the first Friday Night Knicks of the regular season!

New York (1-0) is headed down to the Sunshine State to play the Orlando Magic (0-1). The Magic are coming off of a loss to San Antonio, who pulled away to beat them, 123-97. As for the Knicks, they’re looking to build off of their thrilling double-overtime season-opening win over the Boston Celtics.

Last season, they beat the Magic in two out of three meetings, winning both showdowns at home, before losing once the series moved to Orlando.

After Wednesday night’s exciting conclusion, who isn’t looking forward to this game?

Orlando doesn’t pose as big of a threat as Boston, but the Knicks will need to settle back in and refocus to avoid any letdowns. Since finishing above-.500 in the 2018–19 season, the Magic have just regressed in the seasons since. Last year, Orlando finished 21-51, after going 33-40 the year before.

Orlando has made some moves since it last faced the Knicks. For starters, double-double machine Nikola Vucevic was traded to Chicago. Evan Fournier, who shot well against the Knicks in the two games he played in last season, has now swapped jerseys. Aaron Gordon, who’s better known for his performance in a Slam Dunk contest a few years ago rather than lighting up the Knicks, is now in Denver. So, who’s left?

Terrence Ross and Mo Bamba led the Magic in scoring in their first game against the Spurs. Ross played very well against the Knicks last season, shooting a combined 9-of-14 from deep, and providing a total of 49 bench points over the two games in which he played.

Wendell Carter Jr. and Franz Wagner are new frontcourt pieces. They did fairly well against the Spurs alongside Bamba.

The backcourt is highlighted by young guns Cole Anthony and Jalen Suggs, who will look to put together a much better showing. They couldn’t really find a rhythm offensively and shot a combined 6-of-26 overall, plus a 2-of-13 showing from long range against the Spurs.

Keeping an eye on the new guys

Evan Fournier wasn’t exactly the signing that brought the most excitement during the offseason, but he was probably the most-talked-about Knick after Julius Randle on Wednesday night.

He came through with big-time three-pointers, and it’ll be interesting to see how he follows up on that performance against his former team.

One of the new additions that did bring the early hype, Kemba Walker, had a bit of a quieter showing on Wednesday, but there’s plenty of basketball and season left, so let’s see how he can bounce back.

Walker had just 10 points on 3-of-8 shooting, with eight boards, three assists, and four turnovers against the Celtics.

Fresh off of his summer contract extension, Julius Randle made a solid first impression to open the season, doing a bit of everything in the Knicks’ win. He posted a brilliant stat-line of 35 points, eight boards, and nine assists, and already looks like he’s All-Star form.

Randle has the Celtics defense in a frying pan pic.twitter.com/1eS0FxGkdj

Elsewhere in the frontcourt, Mitchell Robinson didn’t appear to miss a beat. After only playing in the preseason finale due to his foot, he stepped up for an undermanned Knicks frontcourt with an impressive double-double.

Obi Toppin also made a great first impression, contributing productive minutes off the bench and providing a spark for the Knicks. It’ll be fun to see how these guys follow up moving forward, but they’ll be crucial in matching up against the Magic. Orlando seemed to play mostly through its frontcourt with its backcourt struggling in the season opener.

Lastly, he doesn’t entirely fit in the frontcourt conversation, but RJ Barrett’s defense will be something to keep an eye on. As fellow TKW contributor Shaun Geddes said, he put Jayson Tatum in jail. He’s a budding young star, and with improved defense to add to his arsenal, it’s fun to see him grow and evolve. Suggs and Anthony struggled last time out, and if Barrett locks on to one of them, it can be another long, frustrating night for them.

These four players appeared to take a significant step forward in their first game of the season, let’s hope Friday night is the continuation of their evolution and that it wasn’t just a flash in the pan.