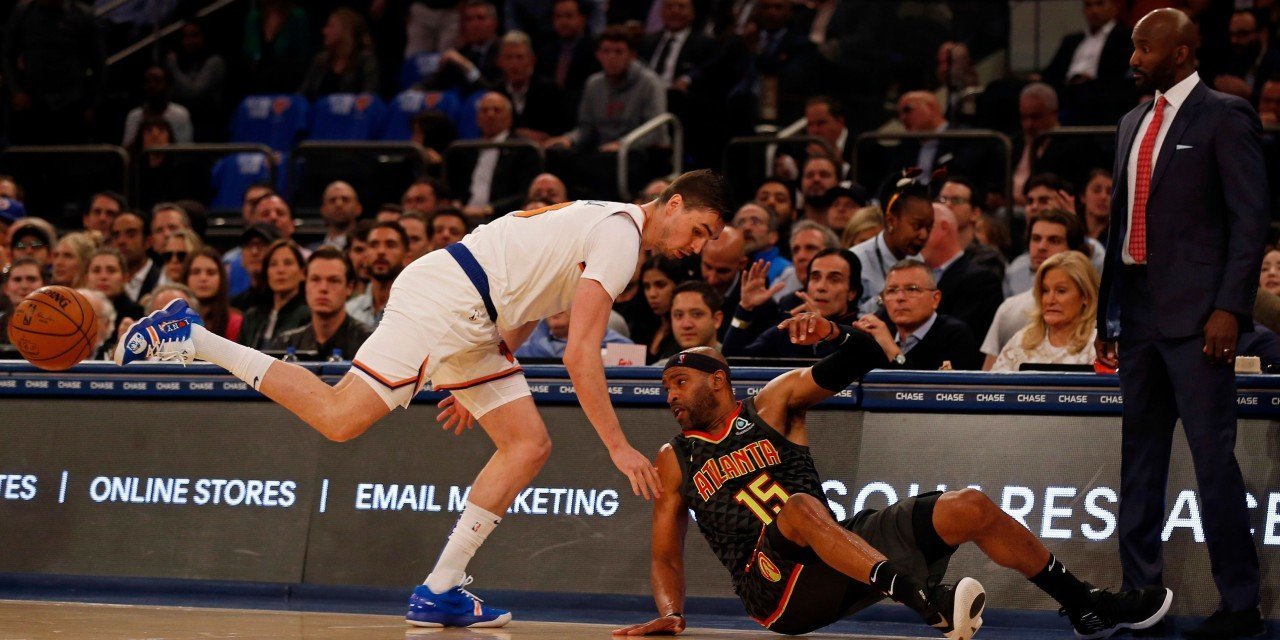 The Knicks finish their four-game season series with the Hawks hoping for a satisfying win to lead them into the All-Star break.

Coming off their 18th consecutive loss, the New York Knicks (10-47) are in Atlanta tonight, competing against the Hawks (19-38) for seemingly a better draft position.

Atlanta is coming off a gratifying 117-113 win against LeBron James and his Lakers. New York, meanwhile, has not won a single game since its victory over the Lakers on January 4th.

Setting a new franchise record for most losses in a row, this is possibly the worst Knicks roster of all time, though the 2014–15 roster also comes to mind. You know, the team that started Lou Amundson and Alexey Shved? These 2018-19 Knicks, however, feature exciting talent that roster just did not have—Kevin Knox, Mitchell Robinson, Frank Ntilikina, and the recently acquired Dennis Smith Jr. immediately come to mind.

Mitchell Robinson has been a monster lately. Earning praise by Coach Fizdale certainly proves that. In his previous five games, coincidentally(?) since Kristaps Porzingis was traded, Robinson has posted 12.6 points on 74.3 percent shooting, 8.8 rebounds, and 2.8 blocks per game in just 22.6 minutes. Most notably, even Joel Embiid took notice of Mitch and his freakish body and talent:

Our @RebeccaHaarlow speaks with the star of tonight's game, our statistician, Dave Fried!

Against John Collins, who has been a complete star for Atlanta, Mitch will have to hold down the paint without committing ticky-tacky type fouls. Collins is posting career highs in points, rebounds, and assists. Yes, his minutes increased by five per game, but his 23.5 usage percentage, 64 true shooting percentage, and 21.7 Player Efficiency Rating (PER) indicate that this boy is good.

Trae Young is carrying the heaviest load for the Hawks and he came up big last night against the Lakers. With 22 points and 14 assists, Young helped the Hawks snap their tiny, in comparison to New York, three-game losing streak.

Smith Jr. is a reason to continue rooting for the Knicks. Highlight plays aside, he simply just fits the bill of a New York–style point guard. Averaging 16.7 points, 5.8 assists, and 1.8 steals since his arrival, Smith Jr. drives to the basket with purpose and manages to finish—looking at you, Mudiay. Look for Smith Jr. to take advantage of the subpar defensive player in Trae Young.

It’s a weird feeling knowing that the Knicks are most likely going to lose every game for the rest of the season; don’t give up on them yet. In the midst of their losing streak, the Knicks have lost four games within 5 points or fewer. Despite it being bad for the tank movement, it’s possible New York ekes out a W.

Here are a couple of players to keep an eye on tonight. …

Knox is the quintessential rookie, going through his highs and lows. He flashed potential last night, crushing Ben Simmons’ soul and posterizing him.

Still, Knox’s shooting form and release are nearly different every damn time he shoots. Keep an eye on his feet and balance; you’ll notice the difference between the makes and misses.

Against Taurean Prince, Knox will have to close out much faster on the perimeter if he wants to contest a shot. Prince is shooting a career-high 38.8 percent from deep and isn’t afraid to launch ‘em.

#WholeTeamDot. Dotson doesn’t receive nearly enough credit. An above-average shooter and defender, Dot is the kind of 3-and-D player who makes a difference. On 16 shots last night against the Sixers, Dotson came away with 16 points, six of which came from deep.

He moves without the ball and hustles on defense. That’s really all I ask for as a Knick fan. Yet most players don’t do it. Should Dotson get the opportunity, he’ll succeed.

Iso Zo was one of the few positive takeaways from the game last night. He provided a scoring spark as soon as he hit the floor and it translated to the box score. 19 points, four assists, four rebounds, and three threes in 26 minutes, is that efficient or what?

Trier’s ability to breakdown the defense, toss lobs, and consistently hit from deep makes him a complete threat to opposing defenses. Against the Hawks, who already are defensively-deficient, Trier is one of the Knicks who is primed to have a solid game, should he be given the opportunity.