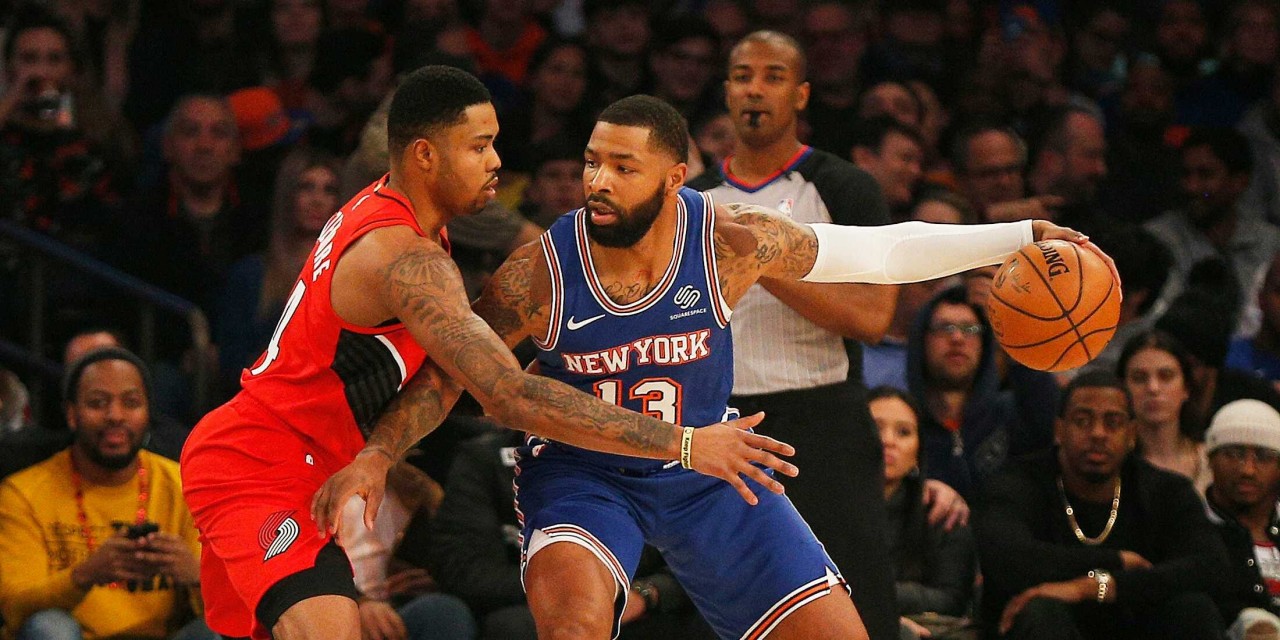 The Knicks welcomed Carmelo Anthony back at the Garden on New Year’s Day but overshadowed his homecoming with a whopping victory over the Blazers.

The Knicks started off looking to get to the rim despite Portland’s Hassan Whiteside, the league’s leading shot-blocker. They only took two three-pointers in the opening quarter.

New York struck gold with the pick-and-roll with Mitchell Robinson as the roll man. The Blazers struggled to keep up with him, as he scored 16 points in the first half, making all eight of his shots (well, dunks). Six of these points were second-chance points and the rest were off lobs.

Robinson finished with 22 points on 11-of-11 shooting, which tied the Knicks’ franchise record for most field goals without a miss and his own career-high. He also recorded eight rebounds.

Portland, now 14-21, didn’t have an answer for him defensively—even with Whiteside. Offensively, they looked to take advantage of the Knicks’ switch-heavy defensive scheme by forcing mismatches. They looked to switch lower players onto Damian Lillard and C.J. McCollum and smaller players onto Carmelo Anthony.

The game was close in the first half as New York ended the second quarter up by three. Marcus Morris, who shot 0-8 in the first half, came out strong in the second half. He scored 14 points on 6-9 shooting in the third quarter, including back-to-back three-pointers early on.

The rest of the team followed Morris’ lead, pushing the lead to 15 points with nine minutes left in the game. The lead peaked at 29 and ended at 24. The Knicks extended their winning streak to three, the largest of the season.

The Knicks saw a stupendous game from Frank Ntilikina. The third-year guard provided terrific pressure on the defensive end and ended with a game-high 10 assists (which is also his season-high) and nine points on 3-for-5 shooting.

FRANKIE SMOKES WITH THE SLAM pic.twitter.com/iBRjyEYbow

Damian Lillard was ice cold on offense, shooting 5-for-20 from the field and finishing with 11 points, 10 rebounds, and eight assists. McCollum had 10 points in the first quarter, shooting 3-for-4 on triples and finished with 17 points. Whiteside added 17 points, 12 rebounds, and three blocks.

Former Knick Carmelo Anthony returned to MSG tonight. Anthony was an All-Star in all six seasons he spent as a Knick. He first returned to the Garden after being traded from New York on December 16th, 2017, putting up 12 points on 5-for-18 shooting as a member of the Oklahoma City Thunder.

The home crowd was thrilled to see ‘Melo back in action. They cheered as he took the court and when his name was announced in Portland’s starting lineup.

Polite round of applause for Carmelo Anthony when announced as a starter for Portland in his MSG return. pic.twitter.com/ddcidbkX2f

Anthony hit his first shot—a turnaround jumper—early in the first quarter. He would rain down many more as the game went on. He scored 15 in the first half and 11 in the third quarter on 5-of-6 shooting.

Ok we miss you but pls stop bro we get it @carmeloanthony pic.twitter.com/NiqywyzA7J

‘Melo was the only positive for Portland tonight. He finished with season-high 26 points and seven rebounds on 11-of-17 shooting from the field and 3-for-5 shooting on three-pointers.

Reggie Bullock made his Knicks debut Wednesday night after recovering from a cervical disc herniation. Complications with his injury almost derailed his deal with the Knicks, but the contract was reworked.

Bullock checked into the game with 3:52 left in the first quarter. He made his first bucket and kept that confidence throughout the game, finishing with 11 points in 15 minutes on 4-for-9 field goal shooting and 3-for-5 three-point shooting.

The Knicks are back in action Friday night against the Phoenix Suns on another west coast road trip.