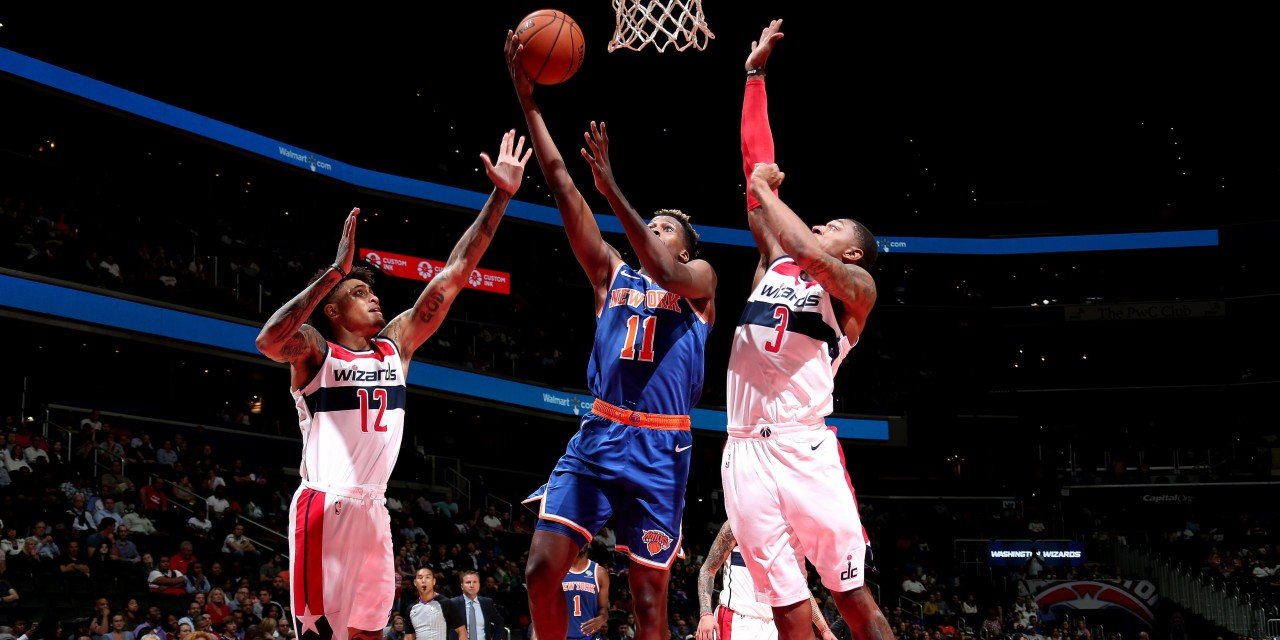 The Knicks kick off their 2019 preseason slate with their only tune-up road game, a matchup with Bradley Beal and the Washington Wizards.

After a long week of competing against each other during training camp, the New York Knicks are finally taking the fight to real competition. On Monday they’ll face the Washington Wizards in their first preseason game of the year.

For a team constantly in flux, this will be the first time the new Knicks get some burn in orange and blue. It may seem like I’m jumping the gun, and this probably sounds a little nuts, but: this game is a must-win for the Knicks.

Take a look at the Knicks’ current situation. They were laughed at by the entire league this summer (again), and are desperate to prove that they can field a not-completely embarrassing team. The best way to do that is to beat the living dog shit out of one of the teams projected to have a high draft pick next summer. New York hasn’t taken a real W all year; let’s take a look at how this could be a great start.

In the backcourt, Dennis Smith Jr., Reggie Bullock, Damyean Dotson, and Kadeem Allen are all out for Monday’s preseason game. 21-year-old guard Frank Ntilikina may never have a better opportunity to showcase his skills. Coming off a confidence-building FIBA World Cup appearance with the French national team, Ntilikina is entering his third “rookie” year with more buzz than he’s had in his entire career. He’ll have to lean on the Swiss Army knife role he’s always been purported to have since he’ll be tasked with guarding the only Wizard worth a damn, Bradley Beal.

Beal is easily the Wizards’ best player, including John Wall, out indefinitely with a torn Achilles. If Ntilikina’s lockdown defense can keep Washington’s only true offensive weapon sheepish in a game which may mean little-to-nothing in the grand scheme of things, then the Knicks can handily put away this Wizards team.

In a way, they remind me of the 2018–19 Knicks. Half of the players are fledgling guys, and the other half are only in the NBA because slots needed filling. The Wizards roster is sad and pathetic—and trust me, as a Knicks fan I know what a sad and pathetic roster looks like.

A second Knick to watch for is new number-one option Julius Randle. A strong power forward with some range, his main opponent will be Rui Hachimura. Hachimura, a rookie purported to be a project player requiring years of development, was a liability on defense in college, and will likely carry that weakness into the early part of his career. Randle will smell blood as soon as Hachimura steps to the low block. If we don’t get much action from outside the post by Randle, I don’t doubt it’ll be because he’s getting everything he wants on the inside.

Besides the Ntilikina-Beal and Randle-Hachimura matchups, the most interesting thing to watch may be the lineups Fizdale employs. He’s got a few shiny new toys, and since so many of them are NBA players who have proven themselves to be competent, I wouldn’t be surprised if he mixed things up, especially with so many bigs now on the roster. A Morris-Randle-Robinson frontcourt seems like the most level-headed, albeit vanilla, decision to start the game—but the possibility of a Brazdeikis-Randle-Portis lineup rounded out with athletic wings could make for some very fun basketball as well. Rookie R.J. Barrett not having a set position seems as much a plus as anything if Fizdale still wants to use his “position-less” philosophy.

Overall, the Knicks aren’t up against very stout competition. This first game against the Wizards should be little more than a playground. I’m looking for moments of chemistry between the guards and big men, and a few more Ntilikina highlights.

I wouldn’t say hopes should be high for this game—but if there’s ever been a chance for the Knicks to rebrand, Knicks v. Wizards I promises to be the best opportunity in quite a while.

Fizdale announced the starting lineup. With Smith out, Elfrid Payton starts at point guard and Marcus Morris (for now) supplants Kevin Knox at small forward. The rookie Barrett starts in the backcourt, too.

»READ: Can the Knicks sneak into the playoffs as an eighth seed?