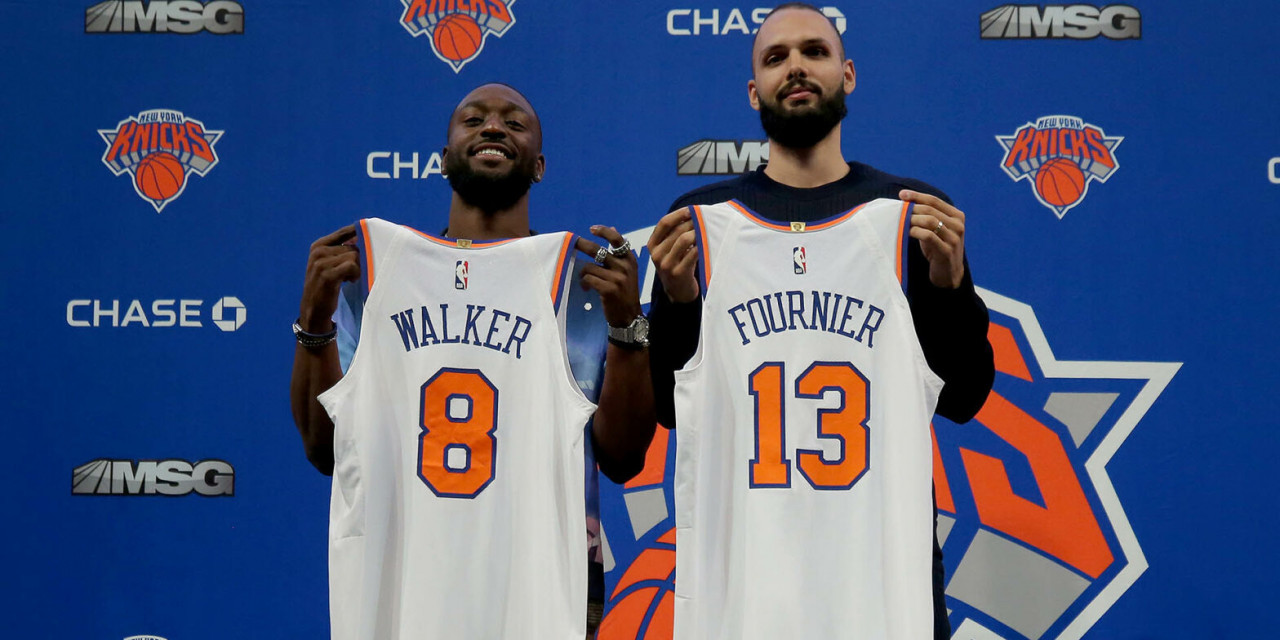 Julius Randle and the Knicks host the Pacers as New York welcomes Kemba Walker home at the start of the NBA preseason for the ‘Bockers.

The NBA preseason is here, and the New York Knicks are back in action as they host the Indiana Pacers on Tuesday night.

The last time we saw the Knicks play meaningful basketball, they gracefully bowed out of the 2021 NBA playoffs following a 4-1 series loss to the upstart Atlanta Hawks, who went on to fall in six games in the conference finals. Since then, the Knicks have worked dutifully to tweak their roster, combining youth and veterans to reassemble for the 2021–22 season.

Meanwhile, the Pacers fired their coach after a single season, (re-)hiring former Dallas Mavericks head coach Rick Carlisle, who coached Indiana in 2003–07, following the puzzling decision by the Mavs.

Let’s look at some of the matchups and storylines headed into New York’s preseason debut tonight.

The headline is Kemba Walker, waived from the Oklahoma City Thunder after the Boston Celtics traded him to the rebuilding Western Conference franchise, playing his first game in Madison Square Garden as a member of the Knicks. The Bronx native long dreamed of playing for the ‘Bockers and he’ll get to make the Garden his home, reliving his iconic Big East tournament shot for 41-plus games. He’s excited to be a Knick, as evidenced by his introductory press conference during the summer and his responses on media day last week.

Walker limped last season with the Celtics, averaging a respectable 19.3 points and 4.9 assists per game on 42.0% shooting from the field, but the four-time All-Star only appeared in 43 out of 72 regular-season games. Supposedly healthier, but not getting any younger, the 31-year-old Walker looks to make his mark as a Knick.

Joining Walker in the backcourt is Frenchman and free-agent signee Evan Fournier, another guard coming from Boston. Fournier was technically acquired in a sign-and-trade with the Celtics, inking a four-year, $78 million deal with the Knicks back in August. Fournier and Walker replace veterans Elfrid Payton and Reggie Bullock in the backcourt. It’s tough to figure these moves as downgrades, but there is something to be said about consistency and role players knowing how to gel with the A-listers like last year’s Most Improved Player in Julius Randle. Nevertheless, the hope is Walker elevates the playmaking to the nth degree out of the backcourt while Fournier is a steady perimeter threat like Bullock with better shot creation of his own.

The big thing to watch on Tuesday should be how Walker and Randle match, as we know star compatibility separates the contenders from the pretenders in the NBA. Today will be the first step in a new era for Tom Thibodeau’s squad.

Matchups aren’t too important in these tune-up games, especially if we see a fourth quarter dominated by the young guys gunning for spots on the rosters, but let’s note what’s going on with Indiana. The Nate Bjorkgren canning and Carlisle hire were the top stories, but another overlooked part is a full season of Caris LeVert, acquired in the three-team James Harden mega-deal with Victor Oladipo dealt to the Miami Heat soon afterward. LeVert joins the underrated and uber-efficient Malcolm Brogdon in the backcourt, and the Pacers will have bubble surprise T.J. Warren back from a stress fracture … at some point. It’s unclear, but he could be back in a month or so.

A NEW SEASON IS UPON US 🔥🔥 pic.twitter.com/2pCbY4ikZy

The Pacers are decidedly leaning young; their oldest players are former Knick Justin Holiday and Torrey Craig, coming off a Finals appearance. Their roster’s average birth year is 1995, discounting the two-way players, and that includes Oregon standout shooting guard Chris Duarte, the 24-year-old Dominican Republic native appearing in his first preseason action. Duarte was rumored as a trade-up possibility at the 2021 NBA Draft for the Knicks, who went in a different direction (trading down and out a few times).

But the top dogs for the Pacers are their frontcourt teammates in two-time All-Star Domantas Sabonis and Myles Turner, the block machine. Nerlens Noel has competition for most impressive shot-blocker in Turner manning the paint for Indiana. Sabonis averaged 20-12 for a season and has recently expanded his shooting range.

Tuesday will be the first taste of the NBA (in non-Summer League form) for some key rookies for the Knicks like first-round selection Quentin Grimes and second-round pick Miles “Deuce” McBride. Depending on how this season goes and if there are injuries or load management for guards Kemba Walker and Derrick Rose, Grimes and McBride may have to be involved in the rotation, a very un-Thibsian approach.

Grimes showed off his microwave ability in Las Vegas—let’s see if he finds rhythm in his first game at the Garden. McBride, known for his defense, certainly excelled on that end of the floor in Vegas, but some timely hoops also came the West Virginia product’s way. With fans in attendance (unlike the bulk of last season), McBride may get a warm welcome and introduction to Knicks fans should his defense propel the Knicks.

Tip-off tonight is 7:30 p.m. ET with MSG Network airing the television broadcast. It’s the first of four preseason games for New York before the season-opener versus the Celtics on October 20th.

UPDATE: Nerlens Noel (along with the rehabbing Mitchell Robinson) is out tonight against Indiana, leaving the Knicks’ center rotation shortened. More minutes will be afforded to veteran forward/center Taj Gibson and rookie big man Jericho Sims, per the New York Post‘s Marc Berman, with Thibodeau planning to rest a key player per preseason game.