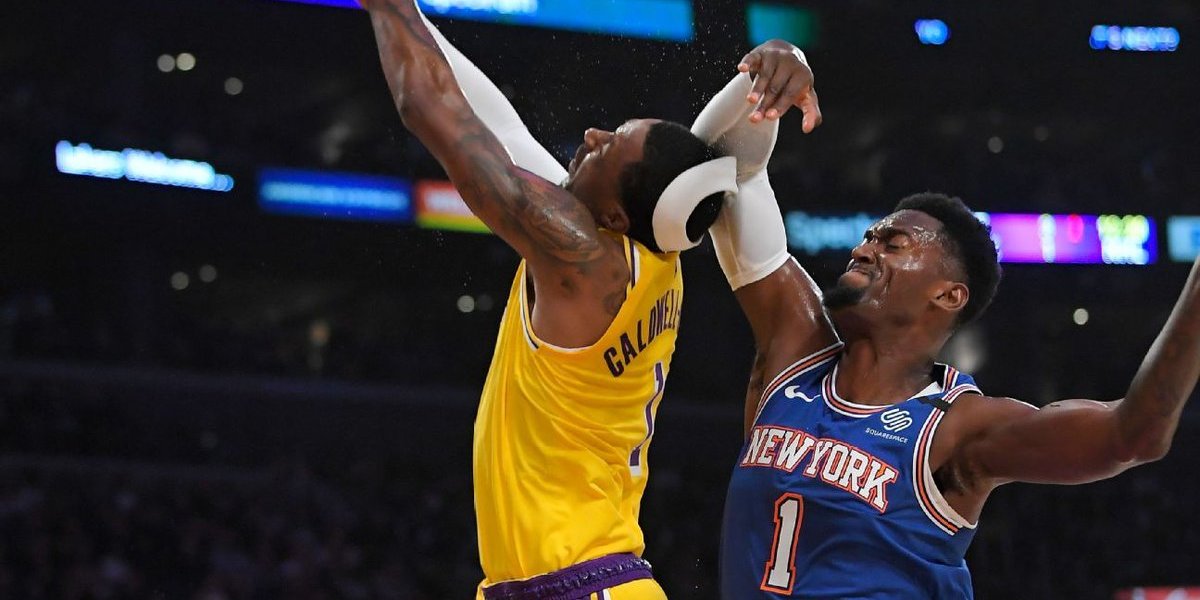 In their second Los Angeles–based road game, the Knicks lost in a blowout to LeBron James and the Lakers in a chippy affair at the Staples Center.

Since Morris was out, the Knicks desperately needed scoring from guys like R.J. Barrett, Julius Randle, and Bobby Portis, who have had their fair share of offensive explosions this season. That trio combined for 36 points as the Knicks went on to score 87 points in the loss to the tough Lakers D.

The Lakers are one of the league’s best defensive teams. Their “SWAT” team of Anthony Davis, JaVale McGee, and Dwight Howard makes scoring at the rim a nightmare for opposing teams. In their last game against the Detroit Pistons, the Lakers’ trio combined for 19 total blocks (20 as a team)—almost matching a single-game franchise record of 21.

Slow start for both teams

Both the Knicks and the Lakers came out the gates lethargic in the first quarter. With five minutes left in the first the score was 10-10, which is an extremely low score for seven minutes of play. The final score in the first frame was 26-21. The Lakers had four blocks, but their sloppy play led to four Knicks steals.

KCP went through concussion protocol and was cleared to return to the game in the second half.

Lakers’ zone shuts down the Knicks

The Los Angeles Lakers played a lot of zone in the second quarter, and the Knicks struggled to find a way to score against it. Without Morris and Portis, New York’s inability to stretch the floor became even more apparent. The zone led to the Knicks only scoring 24 points in the second while shooting 35.8% as a team from the field in the first half. The zone also forced the ‘Bockers into the paint, where the Lakers tallied six blocks at the break.

The Lakers really hurt New York by playing through their star big man Anthony Davis in the first half. He may have only had five points on four shots, but he was drawing double teams and finding shooters wide open behind the arc open consistently, which has remained an issue that the Knicks cannot resolve as they gave up 17 threes on 47.2% to the Lakers for the game.

The Knicks fell behind drastically in the second quarter as the score to end the half was 62-45 in favor of the hometown Lakers.

Lakers star power forward Anthony Davis has a scary fall in the third quarter after he and Julius Randle collided mid air on this Randle drive.

Anthony Davis left for the locker room after a hard fall in the 3rd quarter. pic.twitter.com/ye0RBxg5Po

He did not return to the game, but according to his agent Rich Paul the X-rays were negative and he’s just “sore.” He may miss extended time, but it shouldn’t be anything too serious.

The Knicks’ third overall pick, R.J. Barrett, was aggressive attacking the zone in the second half. In the third quarter he was getting to the rim and finishing over the L.A. bigs at will. He ended the game with 19 points and was one of the few bright spots for New York during the massacre in Staples Center.

There’s not many positives from this game. Marcus Morris didn’t play, Reggie Bullock had a Flagrant-1, Bobby Portis was ejected after a dirty play, Mitchell Robinson only scored eight points with six rebounds, Frank Ntilikna only played 13 minutes, Kevin Knox shot 1-of-7, and Randle had 15 points on 16 shots. Barrett’s 19 points on 47.4% shooting is the only silver lining from the contest.

The Lakers are one of the league’s premier teams, with arguably the league’s best one-two punch, so this result is one that is to be expected without the team’s leading scorer. This tough west road trip doesn’t get any easier tomorrow night as New York travels to Utah to take on a surging Jazz squad. They return to the Garden on Friday to play the Pelicans in a nationally televised game.