Knicks’ Paths Toward Landing a Superstar 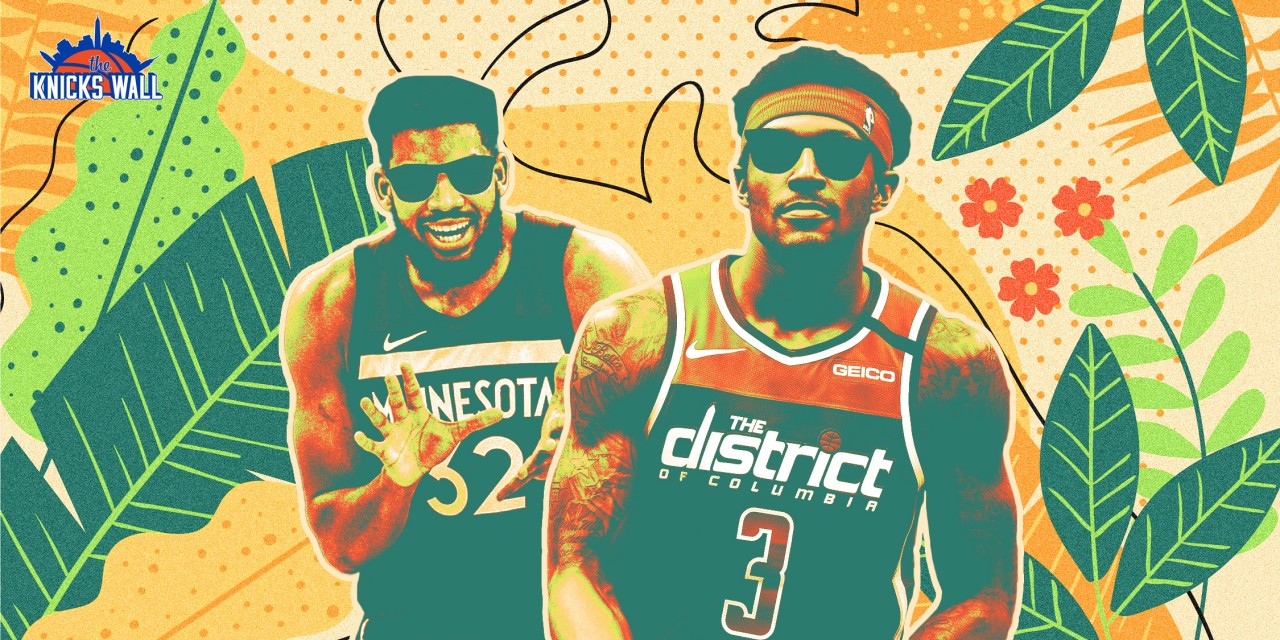 With the upcoming free-agent class devoid of a superstar, what direction will the Knicks go in order to bring in some more big-time talent?

At this juncture of the season, the New York Knicks, at 25-26, currently sit eighth in the Eastern Conference standings, much better than many of us predicted. Tom Thibodeau has changed the culture and has his team playing competitive basketball on a nightly basis. Julius Randle’s breakout season and R.J. Barrett’s vast improvement, among other things, have helped the Knicks return to respectability.

Despite their resurgence, it is obvious the Knicks don’t have enough talent to compete with the big dogs in the East; Brooklyn, Philadelphia, and Milwaukee. All three of these teams have at least one superstar player and at least one other A- to B+ player by their side like Jrue Holiday, Tobias Harris, or Ben Simmons. Simply put, you need at least two very good-to-great players to win big in the Association.

Thankfully for the Knicks, Julius Randle has emerged into the star category and it looks like R.J. Barrett can get there at some point in the next few seasons. However, Knicks fans are starved for superstars and haven’t had one come through the door donning the orange and blue since Carmelo Anthony.

Leon Rose, William Wesley, and the Knicks front office as a whole have given fans optimism that the team will be able to somehow, someway get a superstar to come to play at the Mecca. Rose’s and Wesley’s relationships from their time in the agent world bode well for them and all eyes are on the organization to begin a pursuit for another big-time player this offseason.

Which avenue makes the most sense for bringing in a superstar?

Given the Knicks’ record, they are likely not in contention for a prime lottery pick like Jalen Suggs, Cade Cunningham, Jalen Green, etc., unless they get into tank mode for the final 21 games. With the success of draft picks being so unpredictable anyway, it’s difficult to imagine the Knicks landing a stud in the draft who will make an immediate and profound impact to contribute to winning right away, but you never know.

Below are some notable free agents heading into the 2021 season and how they could potentially work with the Knicks.

Kawhi Leonard: Kawhi is a two-way monster and would be a franchise-altering acquisition for the Knicks, however, the 29-year-old has a player option after the season and I cannot envision him leaving home in Southern California, given that the Clippers’ championship window is still very much open. A third title and Finals MVP with a third different franchise would cement him as one of the all-time greats.

Chris Paul, Mike Conley, Kyle Lowry: This trio of veteran point guards could all be free agents this offseason and all three of them still provide tremendous value. Chris Paul is a first-ballot Hall of Famer and still is able to have a profoundly positive impact on winning. In the past two seasons, Paul has elevated both the Thunder and Suns from the cellar of the Western Conference to playoff-caliber teams. Paul would be an incredible get for New York, but will likely pick up his player option and not leave $44.2 million on the table in Phoenix. Lowry and Conley are also great floor generals and leaders who could potentially move on from their current teams. Lowry possesses championship DNA, while Conley is as consistent and solid as it gets at the point guard position. From the Knicks’ perspective, however, it doesn’t make much sense to dole out a lot of money to point guards in their mid-30’s who are on the back nine of their careers.

DeMar DeRozan and Victor Oladipo: Both DeRozan and Oladipo are underrated guards who have often been overlooked thus far in their careers. DeRozan is arguably having his best season in San Antonio and could definitely be a free agent target of the Knicks. DeRozan will be 32 at the start of next season and will likely come with a hefty price tag. Also, DeRozan isn’t exactly the best fit alongside Barrett and they could get in each other’s way, given that they have similar playing styles. I just don’t see the Knicks outbidding a team for a B+ like DeRozan. As for Dipo, it seems like he has already fallen in love with Miami and the culture they have established in South Beach. At this point, I expect him to stay put.

Overall, the 2021 free-agent class, although solid, lacks juice and superstar power as we’ve seen in past offseasons. This combined with the fact that Leon Rose has already proven to be a dealmaker, the Knicks’ best path to acquiring a big-time superstar might be through a trade if they are in fact looking to go big game hunting in the summer.

With the draft and free agency being unlikely places to find a superstar this offseason, that leaves the Knicks with the option to trade for a big-name player. Thanks to the Kristaps Porzingis trade, the Knicks own Dallas’ first-round picks in 2021 and 2023. The 2023 pick can be used as a significant trade piece when looking to acquire a star. It is also worth noting, the Knicks do have a plethora of second-round selections over the next few seasons they can throw in as well.

Picks won’t be the only asset the Knicks would have to part ways with to bring a superstar to the Big Apple and will likely have to move on from young players, which is always tough to do. I don’t believe Barrett will be able to be pried away from the Knicks in a trade, but don’t be surprised if teams ask for Mitchell Robinson, Obi Toppin, Immanuel Quickley, Kevin Knox, and/or Frank Ntilikina.

The main player that comes to mind that could be shipped out is Bradley Beal. The 27-year-old is having a career year, averaging 31.3 points per game, per Basketball-Reference, and is just entering his prime. Unfortunately for Beal, Washington is abysmal, and trade out of the poor situation down there would boost Beal’s platform even more and his potential to win more. The shooting guard has stated that he enjoys playing for the Wizards but has been visibly frustrated with the team’s lack of victories on several occasions this year. In order to part ways with Beal, the Wizards would likely ask for multiple first-round picks and the majority of the Knicks’ young players. To me, this is a trade that you have to do your due diligence on and at least give the Wizards a call. Adding Beal to the fold to an already up-and-coming Knicks team would make them one step closer to a top team in the East.

It will be interesting to see which stars will be made available, or if the Knicks propose an offer a team can’t refuse, whether it be for Beal, Simmons, or another star that we don’t even think is remotely available right now. Don’t be shocked if we see Leon Rose and company try and make a big splash since the Knicks have the requisite assets and cap space to trade for and hold onto a max-level talent.