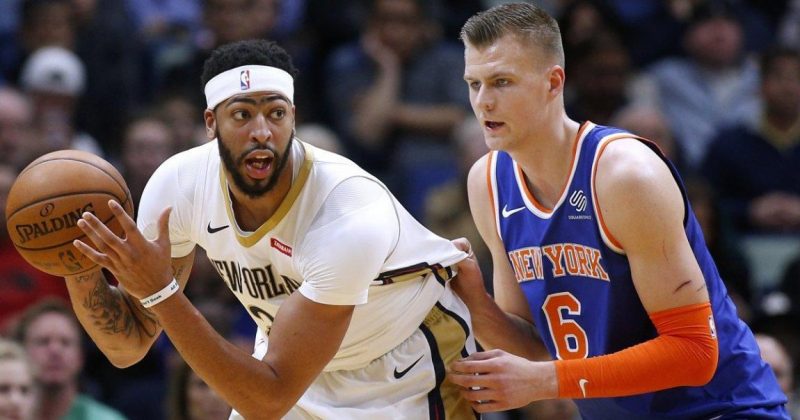 Back in New York, the Knicks take on Anthony Davis, DeMarcus Cousins, and the Pelicans on Sunday afternoon.

The Knicks’ ended 2017 with a nail-biter away from the Garden versus the twin towers of New Orleans. With a winning home record (15–8), the squad looks to steer this shaky ship back on course the Pelicans make their way to the city.

Two weeks into the new year, the Knicks have fallen into a slump as a team without their big off-season acquisition Tim Hardaway Jr. Having started off shocking many with a lot of promise and focus, they’re currently in the 10th spot in the East. Hardaway Jr. made his debut off the bench earlier in the week. Playing with a minutes restriction, it’s possible that Junior can return to the starting lineup this afternoon.

Without Hardaway Jr., the offense has looked predictable. At times, guys were already mentally headed for the locker room. They’ve lost control of winnable games because other teams simply played harder. New Orleans (21–20) comes to New York with its own set of issues related to consistency and energy. However, Cousins and Davis are two of the league’s premiere inside/outside offensive frontcourts. As a duo, they’re averaging 52 points per game with Cousins chipping in six three-point attempts per game. The Pelicans as a team are one of the league’s top five scoring offenses, while also giving up nearly the same amount of points. That being said, the Knicks are capable of out-shooting them with Hardaway Jr. back on the floor.

One thing that these two teams have in common is they lack true depth on the wing. Both Jeff Hornacek and Alvin Gentry are able to deploy a three-guard system and sometimes, you can’t really predict which guard will be on who until the first quarter is in full swing. Given that Hardaway Jr. is playing 68 percent of his minutes on the wing, though, it wouldn’t be a shock to see E’Twaun Moore trying to slow him down.

As the Pelicans’ allow their opponents to hit nearly 37 percent from beyond the arc, Moore specifically is not a great perimeter defender. On switches, THJ will have a chance to exploit the less athletic Moore as he allows his opponents to shoot 39 percent from long distance. Playing in front of the home crowd for the first time in two months, don’t be shocked if Timmy lets it fly all night.

Similar to Timmy, Moore loves to move without the rock, and he can often be found making nice cuts to the basket. Playing with a distributor like Rajon Rondo allows Moore many opportunities to pull-up for a smooth jumper. This season, he’s averaging 13 points per game and is in the top 10 for threes per NBA. This will be another solid test to see how effective Timmy is on closing out on the perimeter in his second game back.

We’ll have to wait a few more days to see Trey Burke suit up. However, at home and versus the likes of Rajon Rondo, the rookie should see more minutes in the fourth quarter.

Ntilikina’s floor time has taken a slight dip during the rough terrain of January. He’s playing just under 20 minutes per game after averaging 24.2 minutes in December. He should be closing games, an opinion that is almost universally agreed upon. One of the less obvious reasons for the dip is that the Knicks lack the personnel at the 1 to pair with Frank. On nights where Frank struggles offensively, the squad has been missing another option who is capable of playing a faster pace too. With Hardaway Jr.’s propensity to get out in the transition, that’ll not only give Frank another trusty option to dish to on the move, but it should help Ntilikina’s own aggression at getting to the cup.

What the Knicks have lacked so far this month is effort and that New York grit that they touted earlier in the season. Another win over the Pelicans can certainly reclaim that edge and cleanse the palate of the previous two losses at home.