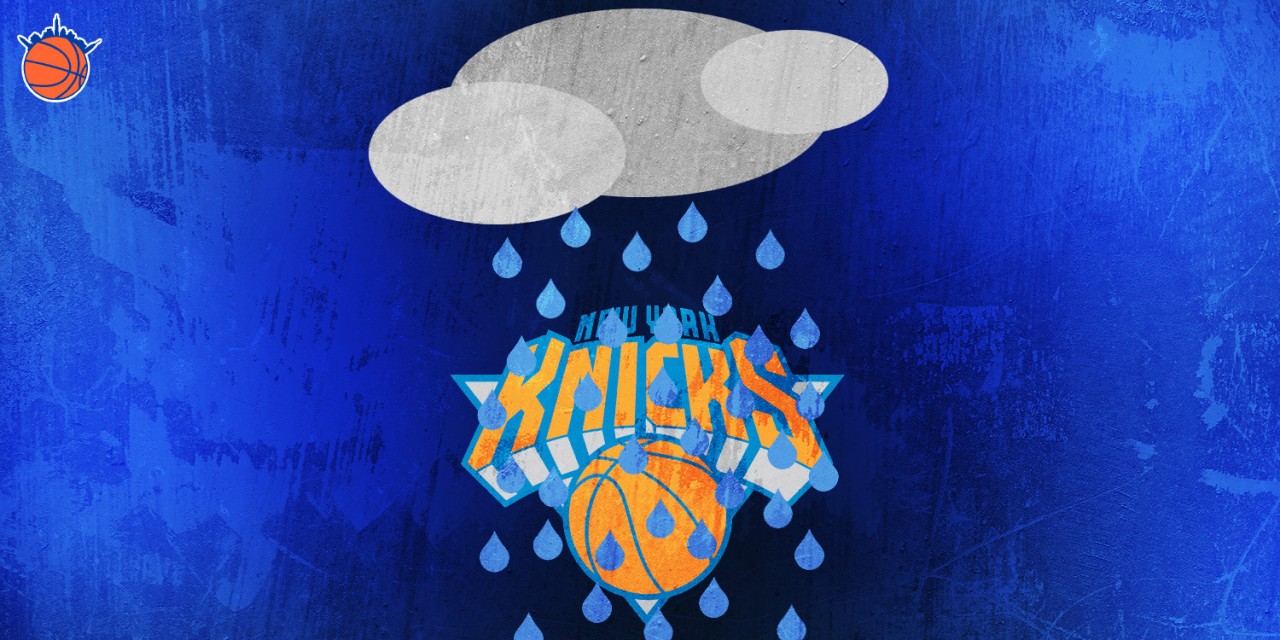 Not much has gone right for the Knicks in two years since the now-deposed Steve Mills hired Scott Perry, but how much has been self-inflicted?

A lot has gone done over the past 12 months and change, not much of it good. The Knicks are in the same place they were a year ago, praying for ping pong balls and prepping for yet another house cleaning. It’s as if the universe has decided the Knicks will never prosper. Is it a blood sacrifice for raking in money hand over fist, or is the team simply snakebit?

Luck is when opportunity meets preparation, and the Steve Mills era was not known for its competence. Just how much of the unfortunate events that have transpired the last two years lies with the front office, and how much of it can be credited to the stars not aligning?

It’s easy to forget, but before Kristaps Porzingis got hurt, the Knicks were trending up. Porzingis was about to play in his first All-Star game. The Knicks were 23-32, which looks fantastic after the seasons since then.

The timing of the injury sucked because it was too late to catch up in the Tankathon, resulting in the ninth overall pick. It put the Knicks in purgatory until Porzingis was healthy enough to return.

Their late arrival to the tank cost the Knicks precious draft slots. At nine they were forced to seek a trade up with not many assets. They contemplated a move for Mo Bamba, but could have maybe done something to get Trae Young or Luka Doncic if their pick was better.

The front office worsened the blow of the misfortune by selecting Kevin Knox over the pro-ready Shai Gilgeous-Alexander, Miles or Mikal Bridges, and Michael Porter Jr. The logic behind taking Knox made sense. Without Porzingis the following season was a wash, allowing the team to use the year to develop a project pick.

The team has yet to follow through on the development part, which has made the pick look a lot worse than it actually was. Gilgeious-Alexander is on the All-Star path, Miles Bridges put on a show during the rising stars game, and Porter looks good after taking last season to heal.

Mitchell Robinson was the saving grace, giving the Knicks something to be optimistic about as a second-round pick-up, but that doesn’t outweigh missing out on players that could be helping the team now.

The trade itself has been covered ad nauseam so let’s not get lost in the details. We know what happened. But this deal was the powder keg that set off the series of events that would end up with the demise of Mills, David Fizdale, and probably Perry too.

By shipping Kristaps Porzingis out essentially for cap space, both Mills and Perry made it clear the rebuild was over and they were going all in on free agency.

At the time it was a plausible move. Kevin Durant was healthy and rumored to be coming to New York. However, that does not change the fact that this move was haphazardly done and executed way too quickly. A Porzingis deal, particularly with Dallas, would be on the table in the summer.

The Mavericks are notorious for being a poor free agent attraction; Porzingis would have been the best talent they could have added, even if Porzingis followed through on his qualifying offer threat. Even Dennis Smith Jr. having a year from hell and Tim Hardaway Jr. having a career shooting year is outweighed by the poor timing of such a crucial transaction.

They accomplished their mission, finishing with the worst record in the league, and had a slither of an advantage at drafting Zion Williamson. Not winning the lottery was always a high possibility, now that the bottom three teams each had a 14.0% chance of winning. What wasn’t a high possibility was the Lakers jumping into the top four miraculously, or the Pelicans and Grizzlies both shooting up six spots to grab the top two picks.

When the Pelicans won the lottery the Knicks were woken up from their dream of a big summer. Not only did they miss out on Zion, they were eliminated from the Anthony Davis sweepstakes. Davis had the Knicks on his list, and had the Lakers been unwilling to meet David Griffin’s price, Zion would be one of the best possible returns Griffin could have had. Instead, the Lakers not only met Griffin’s high price, they were able to add the fourth overall pick as the sweetener.

Missing out on Davis, Williamson, and Ja Morant all but sealed the Knicks’ free agency fate. It would force the front office to lure not only Durant but another superstar.

The real story about Durant’s free agency decision will come out eventually. I am not buying that such a high amount of well-connected reporters were dead wrong about where Durant would play basketball after Golden State. Durant to New York definitely had some serious legs. It was reported with the same confidence that LeBron to L.A. was the season prior.

Every action the Knicks made backed that belief up. The haste in which the Porzingis trade was made. James Dolan going on “The Michael Kay Show,” saying with confidence a star was coming. Rich Kleiman, Durant’s manager, agent and confidant, being a Knicks fan, it all made sense.

In the end, Durant still came to New York, to Brooklyn along with Irving. Durant played his hand right. Not having that Robin to lean on was too risky, just ask Carmelo Anthony. Durant would risk becoming the new ‘Melo.

If a trade for Davis was made or Porzingis were still on the roster, there is a better chance Durant is a Knick. R.J. Barrett will be a productive NBA player, but it’s ambitious to say his ceiling is the second best player on a good team in the immediate future. Robinson oozes potential, but he isn’t ready either.

This is why the front office has to eat a healthy amount of the blame. Removing Porzingis set off a domino effect of them relying on the unreliable. The contingency plan for striking out on stars was even worse.

This is where the blame completely shifts on the front office.

Within seconds of Durant agreeing to sign with the Nets, the Knicks pounced on Julius Randle, which was not a poor decision in theory. Randle had a career year shooting with New Orleans. At 24 years old it was plausible to buy in on him further developing into a starting caliber player. The problem is Randle was now being asked to be the top scorer, a tough task for a player who looks most natural as a rim runner.

The signings that followed did not do Randle any favors. The four power forwards joke was an exaggeration, but still had a bit of truth to it. Randle, Marcus Morris and Bobby Portis need the ball to be effective. The others signed over the summer—Elfrid Payton, Reggie Bullock, Taj Gibson, Wayne Ellington—have played well but not enough to move the needle.

The Knicks are marginally better than they were last season after spending $74 million. That is not the vision Mills and Perry envisioned on Media Day, and a big reason for the house cleaning that has commenced since then.

From the moment he was hired, David Fizdale said the right things. He showered fans with so many empty promises you would think he was running for office. Position-less basketball, uptempo offense, gritty defense; he said it all.

At his core, Fizdale was a player’s coach that would have worked had the Knicks completed their plan. Fizdale’s offense was not very creative, and tailored for highly effective isolation scorers like Durant, Irving or Porzingis.

Following Fizdale’s dismissal after a 4-18 start there was a rumor this wasn’t what Fizdale signed up for. He chose the Knicks over some attractive destinations in hopes of at least coaching Porzingis, and then Durant. Instead he was given Randle, Morris and asked to produce similar results.

Fizdale was unable to adjust, implemented foolish schemes (opting to defend the paint over the three-point line being among his biggest gaffes), and towards the end had the look of someone that would be relieved if he were fired. He got his wish, and the Knicks will be back on the head coaching market this summer.

The front office did not do much to support him, but tried to pin this whole thing on him. Fizdale shares a healthy amount of blame for the poor results, but not more than the two men responsible for constructing the roster.

They knew what Fizdale was before they hired him, and never gave him the tools he needed.

As you can see, one bad move can trigger a domino effect that stifles progress. New York has had its fair share of bad luck, starting with Porzingis tearing his ACL. But what they did in response to the misfortune is why the Knicks continue to toil away near the bottom of the league.

Remaining open to randomness, or as Scott Perry likes to frame it, “staying flexible,” was the talking point of the Mills and Perry regime. A majority of the moves they made went against that ideology.

They locked themselves by choice into a zero sum game. The only solace is Mills and Perry’s flexible plan has left expected Mills replacement Leon Rose with the chance to turn things around quickly.

Let’s just hope Rose takes a look at all the wrong Mills did, and realizes how important every decision is. There is no telling how long the reverberation can last.