Knicks Prepare for Showdown with Boston Celtics at MSG 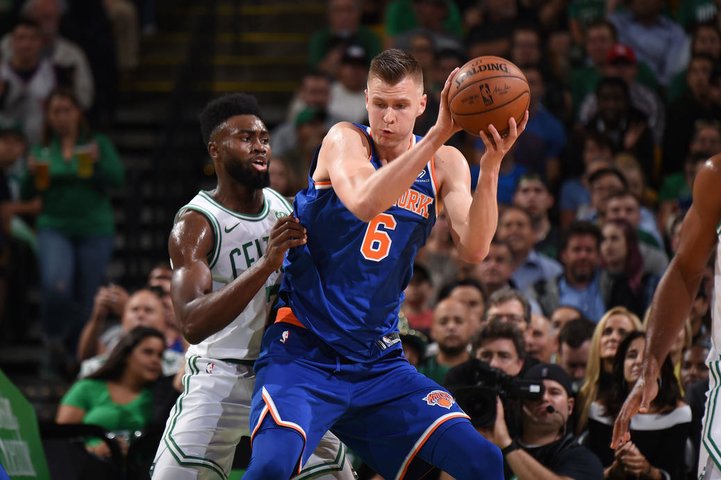 It’s been a long time since the Knicks played the Celtics in a game that had some juice, but the Garden should be jumping on Thursday night.

The last time the Knicks played the Celtics, it was ugly. I know, because I was sitting in those ugly yellow seats of TD Garden with my wife. We didn’t even get the chance to stand up and cheer for Porzingis. The Unicorn played, but it was his worst game of the season. He shot 3-of-14 and looked completely lost in the post on double teams. The Knicks got thumped 110-89 on their way to an 0-3 start. The season was spiraling out of control, and fans wondered if Jeff Hornacek would survive the season’s first weekend.

How things have changed since that night! The Knicks currently hold the 8th seed in the East (meaning tonight could be a playoff preview). They have gone 16-11 since their 0-3 start, and when the Knicks play at home, basketball is as exciting and fun as it has ever been over the past decade at the Garden.

There is nothing like when the Knicks are on the way up. Obviously, it’s fun when the Knicks are actually good, like they were during that random 2012-13 season, but the excitement that surrounds the team when they surprise fans with good basketball is the best.

The start to this season makes me think back to the start of the 2010 season, before the Carmelo trade, when Amar’e Stoudemire was playing like a legitimate superstar. In December of that season, they played the Celtics at the Garden. Remember this game?

The last time I felt this kind of way for a Knicks x Celtics match-up in December was the no good Amare buzzer beater game in 2010 pic.twitter.com/TWK2rWThHO

Sure, they lost the game. But the buzz in the building that night was incredible, as Stoudemire’s words from the summer felt prophetic: the Knicks were back.

The Celtics come to the Garden this season with an impressive 26-8 record, good for first overall in the Eastern Conference. They will be playing on the second night of a back-to-back (good!) but coming off a loss to Miami (not so good if you don’t like the chances of the Celtics losing two in a row).

Let’s break down what to look out for in Monday night’s tilt.

Trust the process? How about trust Danny Ainge. When the Celtics traded the first overall pick (acquired from the Nets) in last June’s draft, many saw it as a typical Ainge move: take one asset and turn it into more assets. But the Celtics and Ainge would also have you believe that the best player in the draft, the player that they would have drafted even if they kept the number one pick, was Jayson Tatum. So why not trade down if you can get him lower?

While it’s way too early to know for sure, it appears, on early returns, that Mr. Ainge knew what he was doing in taking Tatum. The Duke star has made a quick transition to the NBA, doing some things even better than he did in college, like shoot threes.

The Knicks might catch a break as Tatum injured his pinkie in last night’s game vs the Miami Heat. He is officially questionable for tonight’s game, but if you watched him last night, it doesn’t appear that a little finger injury is going to slow him down.

Tatum’s pinky was bent in the wrong direction like 20 minutes ago, and he still does this…
pic.twitter.com/bRj7os22gq

In the last game against Boston, Kristaps Porzinigs had a dreadful night from the field. Part of the problem was New York’s inability to arrange themselves properly on offense. Remember, it was the third game of the season, so the cobwebs of the triangle were still hanging over the team.

Per @IanBegley tweet with Porzingis quote on Knicks not taking advantage of switches vs Boston, here's what he was talking about: pic.twitter.com/yXYWKSTeG9

The Celtics have a versatile lineup with switchable forwards (as we see in the example with Jaylen Brown above). The Knicks need to continue to move the basketball and use a variety of actions to try to fool the league’s best defense. Against the Celtics, dumping the ball to the low block and watching KP go to work isn’t going to fly very often.

I would like to see the Knicks utilize Porzingis in the post similar to how they have used some of their other bigs (i.e. Kyle O’Quinn, believe it or not). Let Porzingis facilitate from the elbow. He will draw extra attention, which should open up lanes for other players to make cuts. And often times it’s not the initial action that creates quality looks against good defenses; it’s the secondary action. Porzingis can make the first pass and then find the ball later in the play after the offense has forced the defense to make several turns already.

If you are watching tonight and see the Knicks running simple dribble the ball up, dump it down to Porzingis, and clear out of the way plays, don’t expect any fleeting success they gain from those plays to last.

The game starts at 8:00 p.m. EST tonight on TNT! Follow @TheKnicksWall for game coverage and @KnickFilmSchool for video breakdowns.