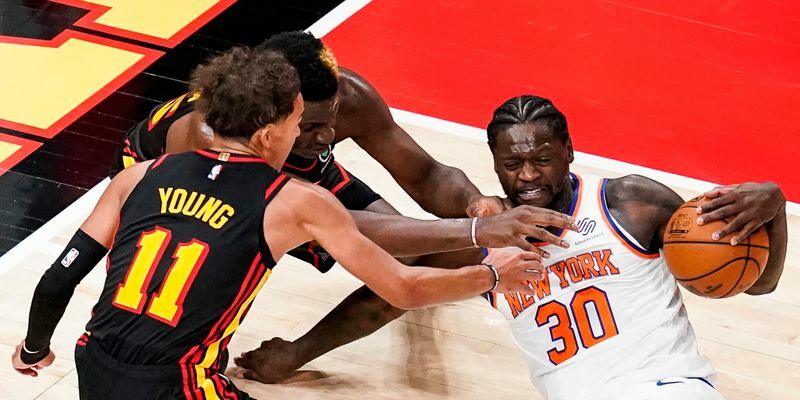 The Knicks host Trae Young and the Hawks on Presidents’ Day at the Garden. Atlanta is on a three-game losing streak while New York is looking for a third consecutive win.

The New York Knicks (13-15) are looking to continue their winning momentum against a team that’s in the middle of a slump.

The Knicks enter Monday with back-to-back wins over Washington and Houston. They’ll be hosting an Atlanta Hawks team looking to shake off their recent struggles.

February just hasn’t been the Hawks’ month. They lost six of their last seven games, including three straight, dropping them to an 11-15 record.

The two teams previously met on January 4th, with the Knicks enjoying a comeback victory to win 113-108 on the road.

No treys for Trae and Co.

All eyes are on Atlanta point guard Trae Young. Between his ability to shoot and facilitate for his teammates, he’ll be the key player to watch and stop.

Averaging 26.0 points per game, Young is ranked in the top 15 for scoring averages in the NBA. His 9.4 assists per game are currently tied for second in the league with Dallas’ Luka Doncic.

Last time out against the Knicks, he didn’t have an efficient scoring night, shooting just 9-of-22 overall. Although he finished with 31 points, a good chunk of those points came from the free throws.

He didn’t have a great performance from the three-point line either, going just 1-of-6 from deep. The rest of the team struggled as well, combining for 9-of-25.

The Knicks’ league-best three-point defense, which allows opponents to shoot just 31.4% from long range, will have to channel a similar performance on Monday.

Slowing down Young will be vital, as he’s their main catalyst, but keep an eye out for other shooters like Cam Reddish, Danilo Gallinari, and Kevin Huerter. Even big man John Collins is capable of pulling up from deep.

According to NBA.com, the Hawks shot 40.9% from long range throughout their 11 wins this season. However, that clip drops to an even worse 31.7% clip during their losses.

Preventing Young or those secondary scorers from finding a rhythm offensively will be important.

The win over Houston provided a glimpse at how the Knicks would deal without Mitchell Robinson.

The answer was Nerlens Noel and Taj Gibson. They may not have the athleticism or skill as Robinson, but they filled in admirably and stepped up.

RJ to Nerlens for the OOP once again! pic.twitter.com/oUI2dDnjt2

Let’s see how they do against Clint Capela, who seemingly outperformed Robinson and had a 12-point, 12-rebound double-double the last time out.

They held DeMarcus Cousins, P.J. Tucker, and a smaller Houston team in check, but Collins and Capela should pose a tougher challenge.

We’re well familiar with what the starting five can bring on a nightly basis, but the bench has been producing nicely as of late. They’re second team only by name.

Immanuel Quickley spent a lot of time shining off the bench this season, especially as the Knicks dealt with injuries earlier on, but the bench appears to be only getting better and deeper as a collective unit.

Three games into Derrick Rose’s return to the Knicks, he appears to strengthen the bench and provide another reliable backcourt piece. When Alec Burks gets going, he can be another solid scoring option, and Robinson’s absence only means more opportunities for Obi Toppin.

Quickley, Rose, and Toppin have been the main contributors off the bench, leading a secondary unit that put up 49 points in the win over Washington, followed by a 58-point showing in the victory over Houston.

It’s been a welcomed change of pace, especially since the Knicks’ bench was performing in the middle of the pack. The Knicks currently average 34.8 points per game (18th in the NBA).

Before, the bench was almost singlehandedly held together by Quickley, but more contributors provide some added relief when the starters need a break or the team needs a spark.