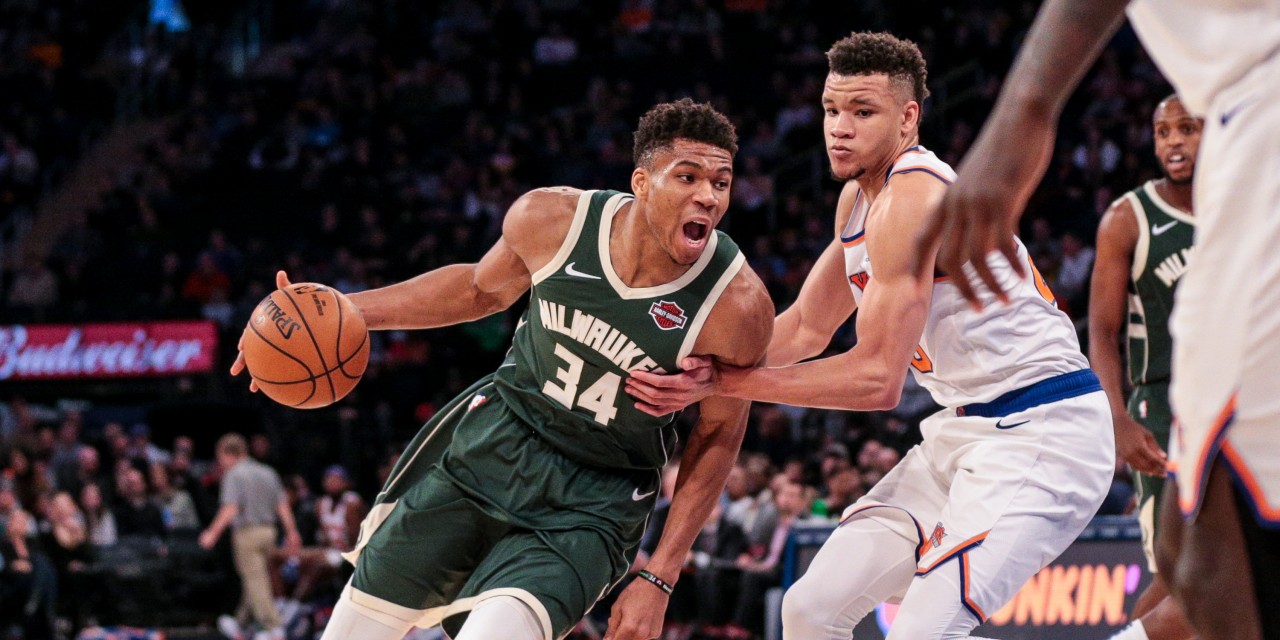 The second night of a back-to-back, the Knicks take on Giannis Antetokounmpo and the Bucks, who last played on Christmas Day.

It’s been over two years since the last time the New York Knicks (0-2) managed to defeat the Milwaukee Bucks (1-1) in an exciting comeback that culminated in a two-point win in overtime.

With the way 2020 has been going, that two-year gap feels even longer.

A lot has changed since then in New York. For starters, there’s been a pair of head coaching changes since David Fizdale earned that dramatic win. Only two Knicks that received minutes in that game still wear the orange and blue: Kevin Knox and Mitchell Robinson.

On Sunday, the Knicks will get their first crack at the Bucks this season. The odds will be stacked against them, but they hope to at least put up a better fight than last year. Milwaukee comfortably beat the Knicks in all three meetings last season.

Last year, Milwaukee finished 56-17 in an unorthodox 2019–20 season. The Bucks finished as the top team in the East, but they got dismantled by the Miami Heat in the conference semifinals.

Coming into the game after last night’s home defeat to the Philadelphia 76ers 109-89, Sunday’s game is scheduled to begin at 7:30 p.m. ET.

Giannis Antentokounmpo signing an extension to stay in Milwaukee effectively shut down any chatter and rumors of the Greek Freak leaving for greener pastures. It was one of a few instances where the supermax did what it was designed to do: entice stars with boatloads of money to stay with their teams, rewarding loyalty, and helping the small market teams compete with the big boys.

Although Milwaukee has enjoyed success in the regular season over the last couple of years, it hasn’t translated into the postseason just yet. Bucks fans are still waiting for that NBA Finals appearance—or even conference title victory. However, with Antentokounmpo still in Milwaukee, the Bucks will still be a formidable opponent and a threat in the East for at least a few more years.

The Bucks season got off to a rough start, with Boston Celtics star Jayson Tatum hitting the game-winning shot at the buzzer over Giannis during opening night. The clutch play overshadowed a strong 35-point, 13-rebound performance by the two-time MVP. However, after bouncing back with a big Christmas Day win over the Golden State Warriors, Milwaukee doesn’t anticipate any difficulties against the Knicks.

Last year, Milwaukee won all three meetings against New York by 20 points or more. The games were so one-sided that Antentokounmpo managed to average 29.3 points versus the Knicks, despite never playing a single minute in the fourth quarter in any of those games.

Overall, nothing went right for the Knicks in that series, who didn’t have the firepower to match Milwaukee’s three-point barrage or the defense to stop the Greek Freak or any of the Bucks’ shooters. All three games got ugly real quick.

Antetokounmpo’s ability to be a matchup nightmare is already well-documented at this point. While he isn’t a perimeter threat, the Knicks didn’t pose much of a threat to slowing down his drives to the basket. He met little resistance on his way inside and even with different personnel and defensive looks in front of him, he still managed to get those shots to drop.

With the way the Knicks failed to contain Indiana’s Domantas Sabonis in Wednesday’s season opener, Antentokounmpo is likely bound for a repeat performance.

Although the Knicks should still try to slow him down as much as possible, they might have to accept that the reigning MVP will get his buckets, but that doesn’t mean the other Bucks should get theirs.

As the Greek Freak gained most of the attention, that resulted in defensive lapses and shooters getting comfortable on the perimeter. Milwaukee shot 43% from beyond the arc against the Knicks last year, with Khris Middleton, Brook Lopez, Donte DiVincenzo, and others torching the Knicks from deep.

Maybe minimizing the damage from other Bucks will help the Knicks put up a closer fight on Sunday night.

For the Knicks, it’d be great to see R.J. Barrett continue to play well. After a solid preseason showing, Barrett showed his improved game was for real in the season opener. On Saturday, though, Barrett scored 10 points on 15 shots, missing 13. Let’s see him rebound from a bad performance build something better in year two against a tough opponent.

RJ Barrett BALLED OUT despite the Knicks loss 👀 🔥

Also, Julius Randle showed much more palatable play against the Pacers, driving with his head up and even showing some solid passing ability for a big man. Randle finished with 25 points and three assists in the losing effort yesterday. As a member of the Knicks’ frontcourt, he’ll be vital in any defensive effort to try and slow down Antentokounmpo’s drives to the basket.

On the other hand, the Knicks need to lessen and minimize their turnovers and careless errors. With Immanuel Quickley likely out, it won’t be easy. His injury was a turning point in the Indiana game, with New York’s offense falling out of sync and struggling to find quality playmaking as Elfrid Payton had a difficult time running the floor.

Rookie forward Obi Toppin will be re-evaluated in 7-10 days after a strained right calf was discovered through MRI, the team announced last night. With Immanuel Quickley day-to-day, the Knicks are down both first-year players along with awaiting a healthy Austin Rivers (groin).