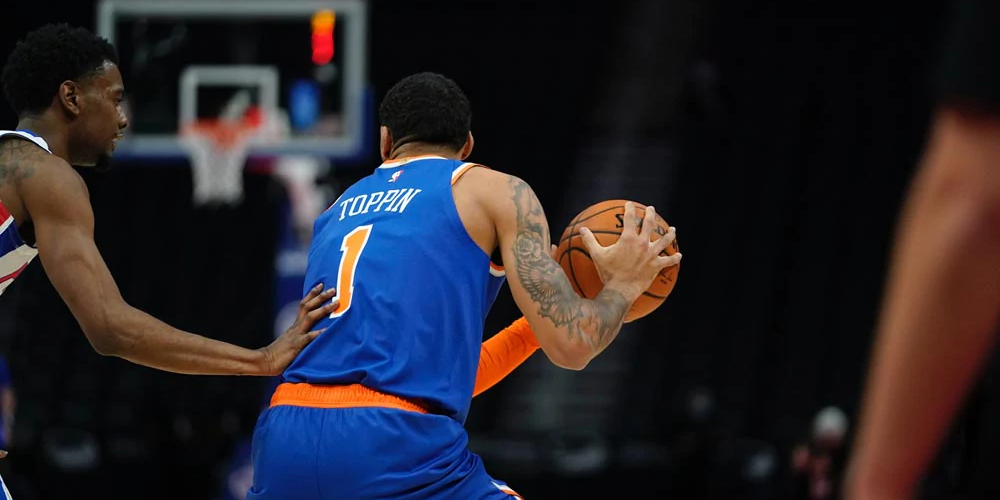 Knicks rookie Obi Toppin and veteran center Nerlens Noel spoke about the excitement to play at Madison Square Garden along with the hope for a safe attendance with fans in the near future.

NEW YORK — The New York Knicks will play their first game in 283 days in home arena Madison Square Garden on Wednesday, December 15th—nine months and eight days since their last contest (a win against the Detroit Pistons) on March 8th.

A lot and a little has changed since the strange and sad detour ended the Knicks’ 2019–20 season and the coronavirus pandemic persists today in the United States. The franchise has the same president of basketball operations, albeit Leon Rose was all of one week into his position back on March 8th. They have a new head coach, however, as Rose handpicked Tom Thibodeau.

Then there is the roster, with several players waived (like Bobby Portis and Taj Gibson) and more added in free agency (Nerlens Noel, Austin Rivers). And finally, there are two new pick-ups via the 2020 NBA Draft, twice delayed, in Obi Toppin and Immanuel Quickley.

“It’s gonna be amazing, I’m from here, I’ve been watching the Knicks my whole life,” Toppin remarked to the media over Zoom on Tuesday ahead of his Garden debut for the Bushwick native. “Me having that opportunity to step on the court with these guys is going to be amazing.”

The Knicks used the eighth overall pick in the 2020 draft in November to take the hometown product Toppin, who won the John R. Wooden Award as the best player in the nation at Dayton during the 2019–20 college basketball season. Toppin grew up in Brooklyn before attending his halcyon upperclassmen high-school days in Florida and later attending college in Ohio.

Toppin bounced back to reality on Sunday in the Knicks’ second preseason game, a road loss to the Pistons (that same team they beat last time at MSG). The 6-foot-9 forward logged just four points on nine shots and four rebounds in 24 minutes off the bench. Toppin also went a chilly 1-of-6 from long range, but early into his NBA career, it was encouraging to see him launch from deep with good intentions.

Knicks first-timer Nerlens Noel, a seven-year veteran, appears to be shoring up the starting role at center for Thibodeau despite outcry to finally and permanently hand rising third-year big man Mitchell Robinson the starter’s minutes at the 5. Noel has led the Knicks in plus-minus through two preseason games (starting both), although he struggled to make an offensive impact in Game 2.

“I don’t even know if I’m gonna start,” Noel, 26, told the convening press on Tuesday. “I’m coming in focused to play the game I love…to play with intensity, passion…we have guys 1 through 15 who will be ready to play,” Noel added. “I’m looking forward to whenever that opportunity.”

On competing with Robinson, Noel mentioned “He’s a dog, he’s my brother.”

Noel is also looking forward to playing at the Garden—even highly anticipating getting to play with the home fans in attendance when it’s safe. “Oh, for sure, you know that yourself my man,” Noel spun right back at the reporter posing the question. “It’s definitely gonna be tough, who knows what the future holds, hopefully we can bring the fans back…I’ve definitely wanted to look forward to that interaction [with fans at the Garden]. … We’ll be handling business until then.”

With FDA-approved vaccines being delivered to New York State—inoculating the most vulnerable first—there is growing optimism of seeing the end of the pandemic in sight, along with the long-awaited and joyous celebration of sports with zero reservations.

The Knicks finish their four-game slate of preseason matchups with a pair of contests against the visiting Cleveland Cavaliers on Wednesday and Friday. Fans and media will not be in attendance.

Obi Toppin mentioned his paternal grandfather was a season ticket holder for the Knicks, although the incoming rookie has only attended “no more than five games growing up.”

Toppin also dismissed looking forward to playing certain players or teams more than others, multiple times referring to being excited to just have the opportunity to be in the NBA.

Tom Thibodeau was asked in a few ways about roster building, given his past as the president of the Minnesota Timberwolves and today’s bombshell that Giannis Antetokounmpo will sign a five-year supermax extension with the Milwaukee Bucks. Coach Thibodeau iterated the need to acquire star talent through any means possible, including the draft, free agency, and trades.

“The system is set up to help the team that drafted the player to keep him…there’s a big advantage…every player, every situation is different…you plan for everything, being opportunistic is important. … You work every day with your player development, try to improve through the draft. … You have to be very aggressive…sitting back and waiting is not a good thing.

“You have to be very aggressive in seeking out those opportunities, you have to make them happen.”

Thibodeau was asked a few times about roster building given Giannis extension and his background as former POBO. He mentioned the need to be "aggressive."

"You have to be very aggressive in seeking out those opportunities … you have to make them happen."

Thibodeau also reiterated that the team doesn’t have a regular-season starting center yet (something backed up by Nerlens Noel afterward claiming he doesn’t know if he’s starting yet). “It’s not set in stone, I like what Nerlens and Mitch bring to the team. … They’re elite shot-blockers…that’s a very important part of our team…starting is not as important as finishing.”

Noel also explained the difference between playing in the NBA’s bubble in Orlando, Florida (when he was with the Oklahoma City Thunder), and the league’s current structure, which will involve daily testing and travel between cities for teams. “The NBA is doing a great job with precautions, daily testing, just being able to see family, friends, live somewhat of a normal life, understanding the restrictions.”