Process on Deck as Knicks Travel to Philly 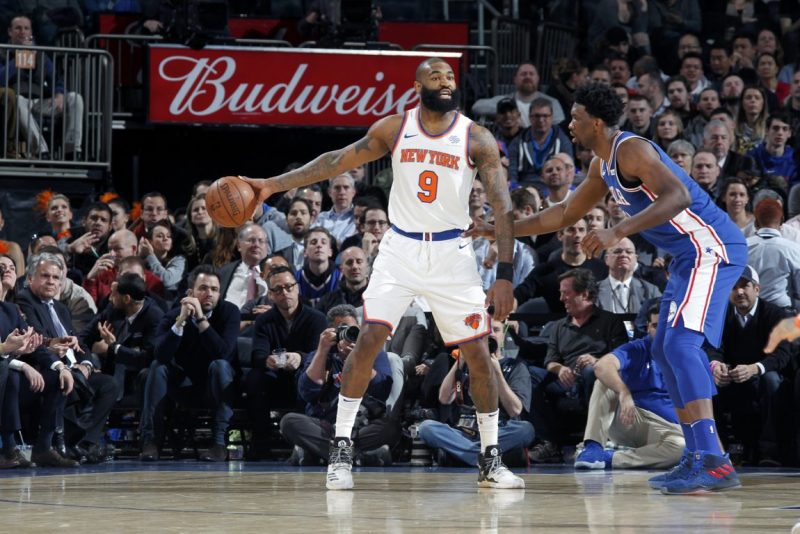 Following one of the craziest performances in franchise history, Trey Burke and the Knicks ship out to Philadelphia to face Joel Embiid and the Sixers.

Despite a tough loss in Charlotte on Monday, this Knicks team has to be feeling a bit better about themselves at the end of March than they did at the beginning. After losing 17 of 18 games, New York has won three of their last six contests, had exciting performances from Trey Burke and Frank Ntilikina, and notched some feel-good wins.

Silver linings aside, the growing rift between Jeff Hornacek and his players has been shifted to the forefront of the conversation surrounding this team. From Kyle O’Quinn to Tim Hardaway Jr. to Trey Burke and, of course, Joakim Noah, it seems that every game has a player disgruntled with the Knicks’ head man.

Tonight, Hornacek and company will trek to Pennsylvania to match up with the scorching Philadelphia 76ers. Winners of their last seven contests, this Sixers squad has been firing on all cylinders for the entire month of March. Markelle Fultz’s return against the Denver was one of the more heartwarming stories of the year, but sentimental virtues notwithstanding, he adds another element to a Philly team looking to make some noise in the playoffs.

Jeff Hornacek said Kyle O'Quinn is still out, Emmanuel Mudiay feels better and is available to play tonight. Dotson and Courtney Lee are questionable. They went through shootaround but will see before the game. #Knicks

The chances of Jeff Hornacek coming back next season to coach the Knicks seem slim. Reports are indicating that many around the league believe he won’t return, which would put the Knicks in the market for a new head coach for the fourth time this decade.

He has struggled to form strong relationships with his players and the front office alike. Whether or not you put any blame at his feet, this wasn’t the regime that hired him. He was in trouble as soon as this year began and Phil Jackson was jettisoned from the Knicks. The hand he was dealt once Kristaps Porzingis went down was the basketball equivalent of a 2-7 offsuit; a hand that is essentially unplayable and features an awful conglomerate of talent. He may be kicked off the proverbial poker table soon either way.

We talked more about Hornacek on the latest episode of the TKW Podcast:

Trey Burke’s performance against the Hornets was insane. Absolutely insane. He knocked down everything, played defense, and carried the Knicks into overtime before a loss.

I don’t believe that Trey Burke can be the capable starter that many Knicks fans do. He prays at the altar of the midrange basketball gods, and those deities are paying him back in spades. Burke scores in the 100th percentile in terms of frequency of midrange jumpers, and he’s knocking those shots down at an unsustainable clip, ranking 98th in efficiency. If Trey Burke is your sixth man, I’d feel fantastic. He’s defended better than we could’ve imagined and he’s distributed the basketball. However, if we’re anointing him as the future of the guard position for the New York Knicks, I’m pumping the brakes furiously.

That being said, he’s under contract for cheap next year, and the Knicks have his Early Bird rights following next season, meaning they can go over the cap to re-sign him. He’s been a revelation as a scoring guard for this team, but unless he switches up his shot profile a bit, he won’t be able to maintain his efficiency and effectiveness as the high usage player he presumably will be again next season.

Tanking, for all intents and purposes, is over. The Knicks are 2.5 games ahead of the Bulls with just two weeks left in the season, leaving them little room to drop. Get comfortable with the ninth slot, because that’s where the Knicks will end the season and pick in the 2018 NBA Draft. You know, unless we get lucky.

The Sixers will be looking to sweep the season series with the Knicks tonight, three wins already under their belt. In their first matchup, Enes Kanter had 31 points and 22 rebounds in the Knicks’ defeat on Christmas. The second matchup saw T.J. McConnell, noted Knick killer, record a triple-double. The third featured the Knicks blow a fourth quarter lead. It’s been a painful run for New York against Philly this year in the NBA.