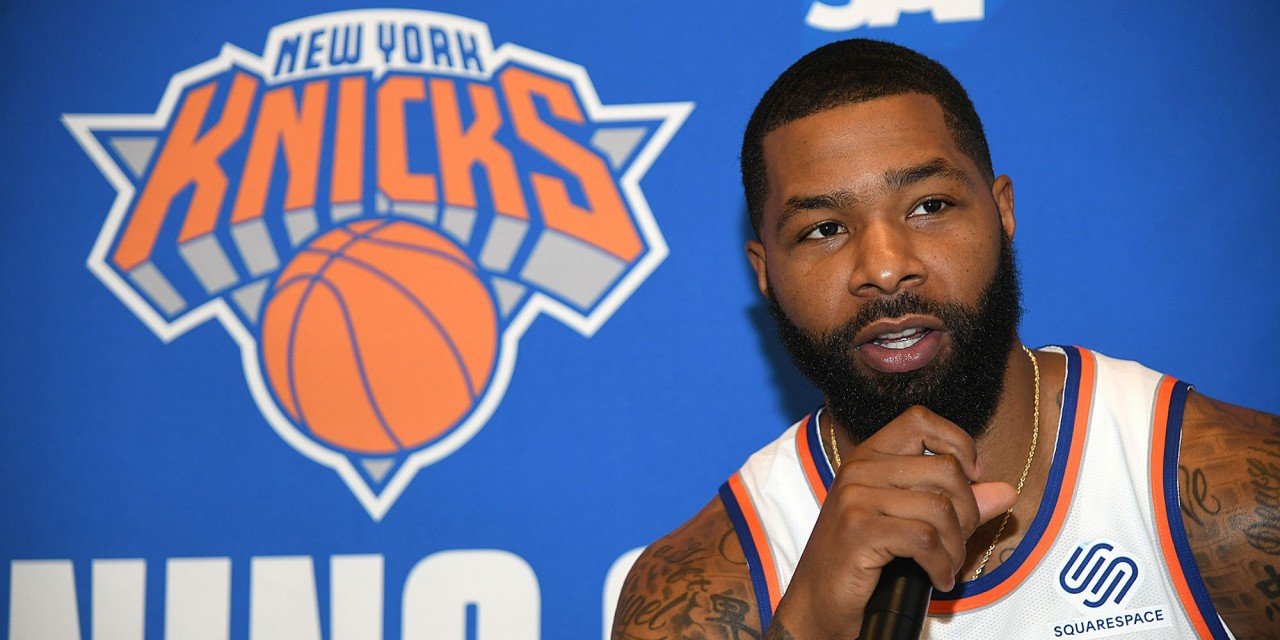 With training camp underway, the new-look Knicks aim to craft a new identity on the court and establish a winning brand of basketball.

At the Knicks practice facility in Tarrytown today, one quote stood out from the rest. When the newest Knick Marcus Morris was asked what he would like the team’s identity to be, he had this to say:

“Old-school Knicks. Protect the Garden. My biggest thing is no one’s coming in there and disrespecting us. If anything, you’re going to come in here and get a hard-fought game, the better team is going to win, but we not tolerating no disrespect, nobody coming in there and thinking it’s going to be easy. That’s first and foremost. And I think we’ve got the guys—matter of fact—I know we’ve got the guys that’s going to stand up and fight everybody.”

We’ve seen this movie before prior to the regular season. This is not to say Morris doesn’t genuinely believe what he said (he does), or that he won’t follow through with it himself (he will). It’s a matter of the rest of the team both buying in to that mindset, and elevating their games to ensure they can execute.

Too often around here it’s been all-bark and no-bite. Morris is hoping to change that. The team added more than just Morris, however, with bruising frontcourt additions Julius Randle and Bobby Portis signing with the team over the summer.

For most Knicks fans, we’ll believe it when we see it. However, I have to say, if there was ever a bunch of players who could at least back that up, this seems to be the group. Most don’t expect them to win many games, but fans won’t mind so long as it’s a clear improvement over last season, and the team isn’t getting blown out on a regular basis as we’ve grown accustomed to.

Speaking of Bobby Portis, Knicks head coach David Fizdale spoke highly of the big man today. “He’s very versatile. The fact that he shot almost 40% from three last year, he’s a guy that’s really good at rolling into the pocket and making plays out of the pocket. He’s an underrated passer; you can run offense through him in the low post and elbow areas. Defensively, I think he’s gotten a bad rap. I’ve watched him on film, and he does a lot of good things helping his teammates and rebounding the basketball.” Portis figures to play a significant role for the team this season, both backing up Mitchell Robinson at center or Julius Randle at the power forward slot to provide some much-needed spacing for a Knicks team still trying to catch up to the offenses of 2019.

One hot topic this offseason has been what offense Fizdale plans to run. In his time as head coach in Memphis, Fizdale increased the pace of the Grizzlies play, while significantly lowering their midrange attempts and increasing their three-point shooting volume. Last season in New York, the offense was a bit of a head-scratcher. Led by Emmanuel Mudiay for much of the season, the offense devolved into a more isolation-based style of play, without the talent to justify it.

After the Knicks traded for Dennis Smith Jr., the team ran more frequently, and was able to get out in transition and play to their strength a bit. This wasn’t just about who was playing guard, either, as that style of play helped Mitchell Robinson get a slew of easy baskets and alley-oops in transition from both Smith and Allonzo Trier alike.

When asked today about what style of offense he plans to implement, Fizdale said “I want to get the ball over halfcourt quickly. I want to get the ball moving. I want to get a lot of guys involved in the game, with the understanding of whoever’s got it going that night, we gotta keep that guy going. We’re going to be an attacking team, a team that gets into the paint, a team that gets to the foul line. I feel like at the end of the day, putting pressure on the rim is the number one priority. I think that’s what creates everything else. We have more three-point shooting this year, so I expect us to take more threes and make more threes.”

Fans I’ve spoken to want, at a bare minimum, two things this season: a team that goes out there and is in every game, whether or not they win. A team that plays with a sense of pride. A team that plays an enjoyable brand of basketball that makes it worth tuning in. This roster isn’t the most talented (yet, barring multiple kids on the team breaking out rapidly), but they do employ players who can execute these things. They have a roster full of guards and wings who thrive in transition—most notably Dennis Smith Jr., R.J. Barrett, and Kevin Knox. They have one of the top shot blockers in the league in Robinson who, with the dynamic Julius Randle, figures to be a potent 1-2 punch in the frontcourt—and both of them love to run the floor. Randle, most notably, will play “a lot of point-forward” this season, per Fizdale yesterday.

If the wins don’t come, this team should at least be bruising and entertaining—and that’s a hell of a lot more than we’ve had in recent years.