The Knicks Proved Kemba Walker Was Not the Problem 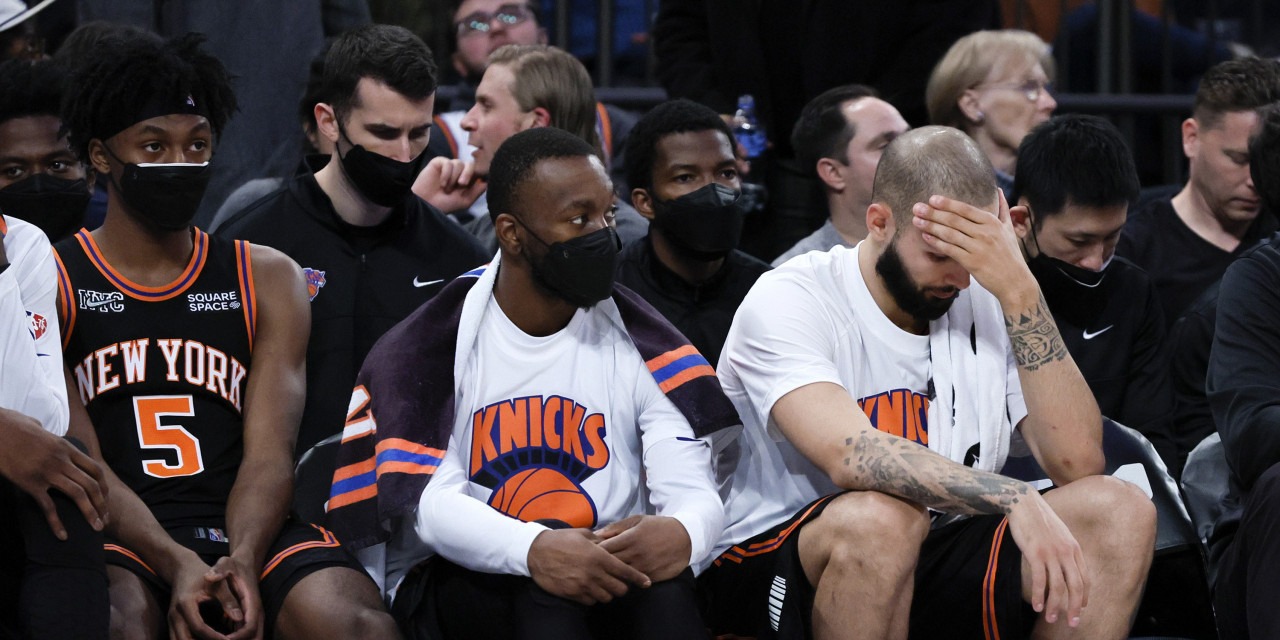 The Knicks have one win in seven games since benching Kemba Walker. It’s evident the former All-Star isn’t the only problem with this team.

Tom Thibodeau had to make a move.

The sluggishness of his starting lineup had become too unbearable, hindering the team’s ability to win games as the team sat at a middling 9-8 record. The influx of scoring threats to flank Julius Randle, RJ Barrett, and Mitchell Robinson had flopped. The refurbished starting lineup logged the most minutes of any five-man lineup and posted a -15.7 Net Rating. The two acquisitions, Evan Fournier and Kemba Walker, remarkably proved to be a downgrade from Reggie Bullock and (gulp) Elfrid Payton.

Walker ended up being the odd man out when Thibodeau had seen enough, and Walker did not give his head coach much of a counterargument. Walker, who, in an optimal outcome, would have averaged 20 points a night, instead averaged 11.7 points per game. When the shots are not falling, there is not much else Walker can offer, the known risk when he signed. His defense was somehow worse than a projected worst-case scenario, and his playmaking was not nearly as effective as imagined.

Put simply, the Knicks were better when Walker kept his warm-ups on, particularly on defense where Walker’s presence presented the strongest contrast.

A statistical summary of why the Knicks are pulling Kemba Walker from the rotation:

They are 27th in offense with him playing, 9th with him off.

That made it a no-brainer decision for Thibodeau to remove Walker as his first fix. Defense was the core of what made last year’s team special. The fourth-ranked defense in the NBA gained a reputation for dragging teams into a dog fight every night. The stingy defense would slow the game down, force action in the halfcourt; the Knicks held teams to the second-lowest fast-break points, allowing just 10.5 points per game.

This season, that defense has dipped and reputation vanished. The difference in effort has been jarringly noticeable. The team is ranked 24th in Defensive Rating and even without Walker things have not changed much on that end.

In the seven games since Walker was removed from the rotation, the Knicks rank 28th in the league in defensive efficiency, allowing 117.9 points per 100 possessions. The remodeled starting lineup with Alec Burks has somehow performed even worse on defense, and the team has gone 1-6 since Walker’s exile.

Since that time, Mitchell Robinson has also been demoted, but that too did not prove to give the starters much of a jolt. The real fix is swapping Fournier out; however, there has been an underlying “we did not pay him $78 million to come off the bench” energy towards Fournier. The high-priced free agent is averaging a whopping 12.4 points per game. Since Thibodeau made the starting lineup tweak, his average has dipped further to 10.4.

The apprehension to breaking up one of the best bench units in the league is understandable. But that is where Kemba Walker could help if Thibodeau is willing to experiment. Based on everything he has said since removing Walker from the rotation, there is little appetite to bring Walker back into the fold.

Walker could not defend at the level of Thibodeau’s liking, and who can blame him, but choosing to become the team’s chemist is not the best use of anyone’s time.

The unwillingness to use Walker should come as a surprise. When he initially made the move, Thibodeau made it clear he did not view Walker as a good fit coming off the bench.

This view is patronizing at best, as if a bench role is beneath Walker or the greatest example of Thibodeau’s stubbornness. The reasoning at the time of Walker’s benching was the concern that playing Walker with two other smaller guards. As valid a concern as that is, it is a concern that goes away should Rose and/or Quickley get bumped up.

Sunday proved that that reasoning was nonsense. On Sunday, with Burks and Barrett both out, Walker could not find any minutes. Rose joined the starters, and instead of sliding Walker in with Quickley in the second unit, Thibodeau instead opted for an eight-man rotation. The tighter rotation struggled to produce many points, the Knicks scored 97 points on 42.7% shooting from the field.

It is hard to believe that Walker could not have helped at all in a situation like this. It is true he struggled to score when he was in the rotation, but he still looked like someone that could still get his shot off.

The way in which Walker was able to score can still help the team, especially in a limited role. His 41.3% three-point percentage still ranks third on the team and could help a team that has shot 34.1% from beyond the arc since he stopped playing. His ability to score in bunches could also make him an appealing bench option. A consistent theme in his better showings as a Knick has been Walker’s ability to pour in points in a quick amount of time.

In his highest-scoring night as a Knick, 26 points against his former team the Charlotte Hornets, Walker scored 17 in the first quarter. Against the Philadelphia 76ers, Walker contributed 19 points, scoring 10 in the final four minutes of the second quarter and nine on 3-of-4 shooting from deep in the third quarter.

Given the lack of success since Walker’s exile, it may not be the worst idea to kick the tires on Walker as a role player. Thibodeau may feel Walker is a starter and only a starter, but Walker sounded like someone who would be willing to help any way he can.

“It’s not about me, it’s about the team,” Walker said last week in his first public remarks since his benching. “So if he feels that’s what’s going to make the team better, then so be it. I’m just going to be here for my teammates. I’m here to help in any way, shape, or form that I can.”

Finding Walker playing time is far from Thibodeau’s top priorities, but doing so should be the result of more pressing needs, namely figuring out a good starting unit. This team does not have the same energy as last season despite keeping a large core of last year’s group, and that energy has not improved without Walker.

When Walker signed, there was no question that he would fit in the locker room. There is still time for Kemba to also fit in with this group on the floor if Thibodeau is willing to embrace change.

Embracing change has never been a strong suit for Thibodeau, but something he knew he had to do when he benched Walker. Once again, it is clear, Thibodeau must make a move to right this ship before it’s too late.