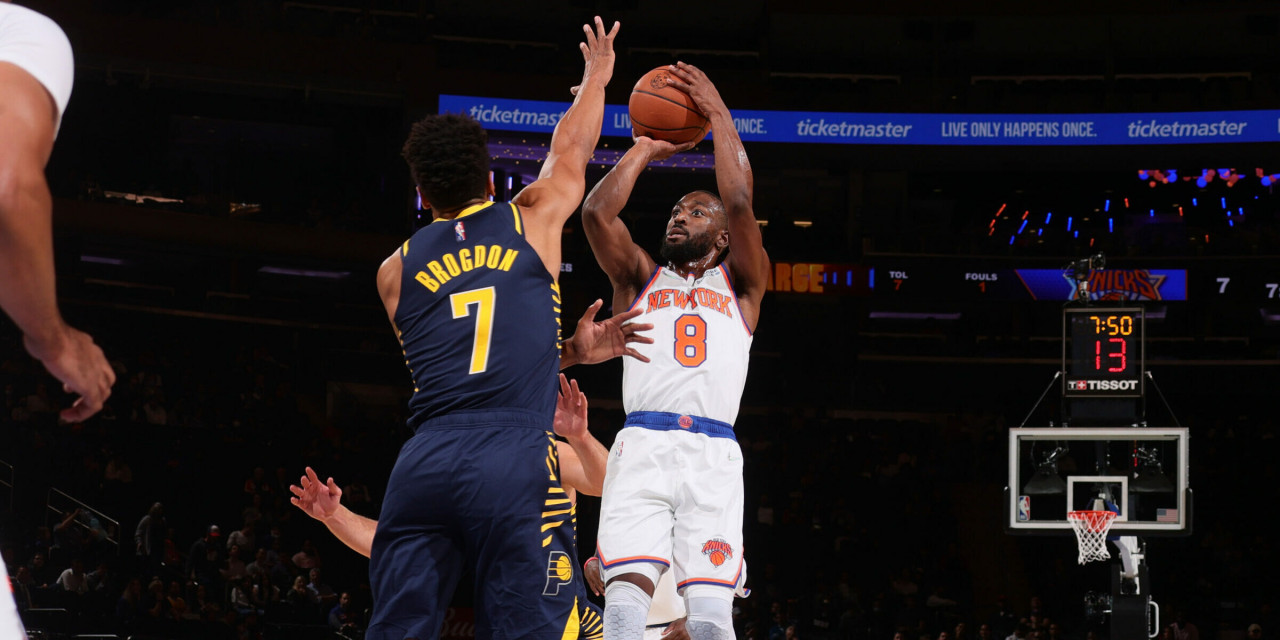 The Knicks got The Garden rocking in their first preseason game by handily defeating the Pacers.

After an exciting offseason, the New York Knicks returned to action, facing the Indiana Pacers at Madison Square Garden in their first preseason contest. The Knicks ushered in a tremendously hyped-up season with a 125-104 win.

It obviously remains to be seen how good the Knicks’ offense will be this season, but tonight they made it abundantly clear that it will be an upgrade from last year. Right out of the gate, they found quality looks at the basket, including several corner triples that they cashed in on.

Walker and Fournier, New York’s premier additions this offseason, went right to work showing what they can do for the Knicks’ offense with their ability to attack the basket and shoot from anywhere. Randle displayed nice two-man actions with both of them. New York also pushed the pace often in the opening quarter, highlighted by a strong coast-to-coast take from Obi Toppin.

Overall, the Knicks’ offense looked more balanced than it did at arguably any point last year. With so many options, it will be interesting to monitor how they divvy up the touches. Randle and Barrett will have to adjust to playing off of more ball handlers and find spaces for them to make plays for them. Moving the ball should be easier and more fruitful so long as the chemistry gets there. In their first test with Walker and Fournier, the quartet made it look like they’re already used to playing together.

The Knicks went up 36-26 after the first quarter and 67-55 at halftime, forcing Indiana to shoot just 27.3% from beyond the arc in the first half. The Pacers opened the second half with their bench, opting to rest their starters for the rest of the game. Consequently, New York pulverized Indiana to open up the third quarter and never looked back.

A few young Knicks flashed some immediate improvements in this game.

Barrett looks to have made another improvement to his jump shot, making it quicker and more single-motion-like. He shot 3-of-6 from three-point land. Barrett looked very active on defense, too. After looking to deny his man a little too much early on, he settled down and caused some disruptions. His defensive contributions will be extra important this year now that he has a lesser defender beside him on the wing.

RJ BARRET HAS A PG NOW AND IM EMOTIONAL pic.twitter.com/DqpUTq7SuM

Toppin, who recorded 10 points and five rebounds in 14 minutes, showed more than that confident drive to the hole on the fast break. He looked much more sure of himself in summer league, looking to get his own looks with much, much more authority than he did when he entered the league. The second-year big has carried that confidence over to the Knicks’ preseason opener. As Toppin gets comfortable finding more ways to contribute on offense, one of the best bench units in the league only stands to improve more.

Easing back into it

Nerlens Noel was inactive tonight as Tom Thibodeau decided to rest him. Thibodeau told reporters before the game that he plans to rest a key player for each preseason game. Mitchell Robinson did not play, as the big man is still recovering from the foot injury he sustained last season.

Thibodeau laid out his rotation plan for preseason — he plans on playing regulars but in shorter minutes. Will pick a game to rest certain starters individually like Nerlens Noel today.

The Knicks’ preseason continues on Saturday. They’ll play their lone preseason contest away from MSG against the Washington Wizards at 7:00 p.m. ET.

»READ: Season Series Against Sixers Will Be Good Measuring Stick for Knicks