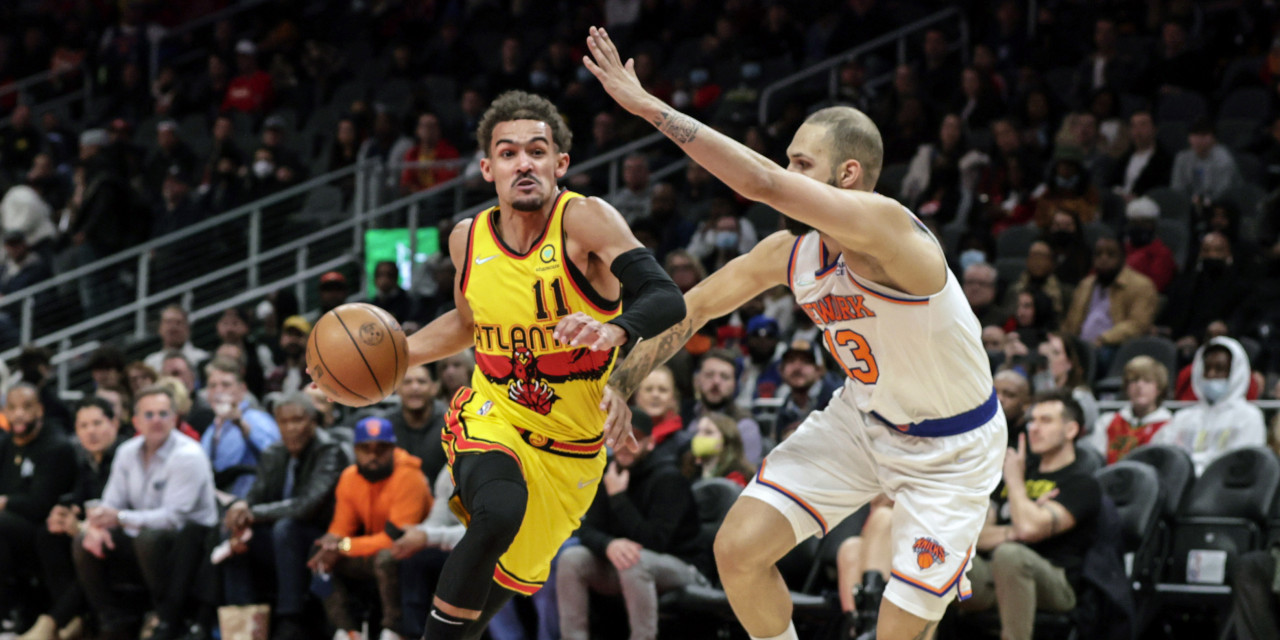 With the starters rolling and a combined 50 points from RJ Barrett and Julius Randle, the Knicks got the better of the Hawks for the third time this season.

The Knicks won their third in a row and handed Atlanta their 10th loss in their last 10 tries on their home deck.

Mitchell Robinson and RJ Barrett picked up where they left off against the Dallas Mavericks. Robinson took advantage of powerful center Clint Capela’s absence, scoring six points on a pair of dunks and free throws while pulling down five boards, with two coming on the offensive end. Barrett went the distance in the first term, again being the focal point of New York’s offense, resulting in 10 points on 3-for-7 shooting along with three assists.

New York’s bench provided a spark to end the period, propelling them to a three-point advantage, with Quentin Grimes draining a pair of jumpers for five points while Taj Gibson old-man moved his way to five points on 2-for-2 shooting.

The Knicks were sloppy on the defensive end, transgressing nine times for 11 Atlanta free-throw attempts, which accounted for a third of the Hawks’ total offensive output in the period.

Barrett started the second quarter and converted another and-1 play, bringing his total to 13 points in the opening 14 minutes while Julius Randle found his groove in the second frame. Randle went 5-for-6 from the field, 1-for-2 from distance, and 2-for-2 from the charity stripe for 13 points.

New York moved the ball freely in the first half, totaling 15 assists led by Randle’s six dimes and Burks’ four, completely picking the Hawks apart. The ‘Bockers shot 24-for-40 (60%) overall and 7-for-14 (50%) from three in the opening 24 minutes.

Atlanta dearly missed Capela, with Robinson and Gibson combing for 15 first-half points, powering the Knicks to 26 points in the paint compared to only 14 for the Hawks. The Knicks’ defense was played with feet and not hands in quarter two as the Knicks tidied things up in the aspect, committing only three personal fouls for only an additional two Atlanta free-throw attempts.

The Knicks started the third quarter much like they started the game: sloppily. New York went 7-for-25 in the period, with the ball movement of earlier being absent, adding just four assists to their first-half tally.

Randle and Barrett kept things ticking along for New York, scoring 12 of the 20 Knick points in the period, with both players taking their tally past 20 points for the night, the third such consecutive game for Barrett.

It was very much a back-and-forth affair in the third term with New York neither being able to break free beyond 17 points nor Atlanta being able to close the deficit to single digits until the final seconds of the quarter.

The Knicks lost their ascendancy in the painted area, being outscored 12-6 in the third quarter, with Atlanta’s perimeter defense picking up and forcing New York into stagnant offense and repeated tough shots while the Knicks themselves were a step slow and a step late on the defensive end allowing the Hawks to go 10-for-20 in the quarter.

The Knicks were abysmal out of the gate in the final frame, conceding a 9-0 spurt after they had extended their lead to 13 points. The frustration was evident with Tom Thibodeau calling two early timeouts in the period, the first of which saw sophomore forward Obi Toppin’s night come to end.

After a career night in Toronto, Toppin had his sixth straight quiet outing and was yanked from the game after 10:30 of action, registering only a single assist, one foul, and several blown defensive assignments.

It was an uncharacteristically unproductive second half from the bench, registering only three points by way of a Grimes’ long-range bomb, with all five starters being reinserted into the game with 8:35 to go.

After the Hawks bench cut the deficit to two points, Evan Fournier was the steadier for the Knicks. He nailed a long step-back two and then a wrong-footed floated to push his total to 13 points. This marked the second consecutive game all starters scored in double-figures.

Said starters came up big when it counted and got New York over the line. Fournier and Burks led all-comers with nine points apiece in the period while Barrett, Randle, and Robinson added another 14 between them. The first five accounted for all 32 points in the fourth quarter.

This would be the main takeaway from the game. The starting unit has been inept for most of the season, but they gave New York breathing space in the first half and closed out the game, two things we haven’t been able to say with any consistency this year.

A decisive Julius Randle is the best Julius Randle. He finished with a line of 24 points, six rebounds, and nine assists—once again being the engine of the offense. Randle made quick decisions with the ball in hand for the most part and he found success when he drove quickly after the catch rather than facing up, jabbing, or backing his man down for five seconds. The doubles and attention are going to keep coming. The faster he kicks out the better shot quality the team will have.

The Knicks are finding a consistent footing offensively. Randle, we’ve spoken about, and RJ Barrett had another 26 points and attempted 10 free throws as the more primary ball-handler while Evan Fournier is beginning to do what he was paid to do—shoot. He had 18 points on 13 shots, going 4-for-8 from distance with the occasional dribble-drive thrown in.

Mitchell Robinson is at the correct weight. 14 points, 13 boards, five offensive, and consistent vertical explosiveness. His movement is better and he is playing more—25-plus minutes in six straight—which means nothing but good things for the Knicks.

The Knicks are home the next four games spanning the next eight days. It’s time to build off of this January momentum.