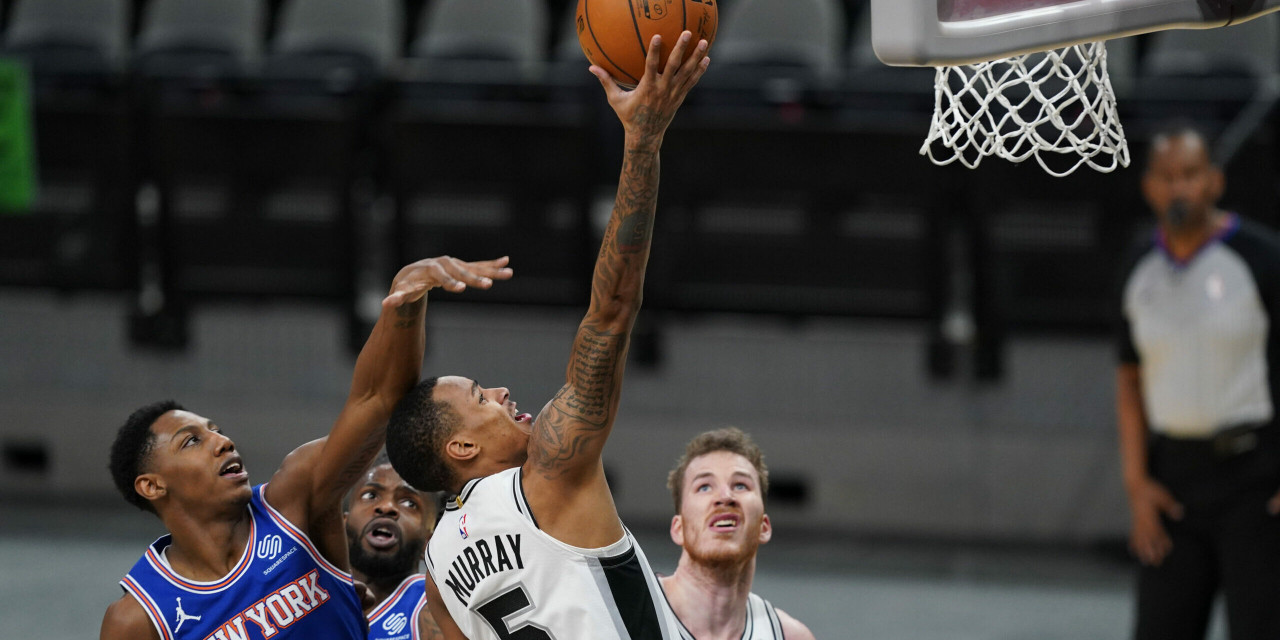 The Spurs may be without several key contributors, but budding star point guard Dejounte Murray is running the show against the Knicks.

After splitting a home-and-home series with the Boston Celtics, the New York Knicks (19-21) will look to complete the two-game regular-season series sweep over the San Antonio Spurs (15-24).

Against the Celtics, the Knicks and their fans got to experience all areas of the emotional spectrum, from their comeback win topped off by an RJ Barrett buzzer-beater on Thursday night, followed by a flat, lopsided loss in the rematch on Saturday. Regardless, the Knicks will try to refocus and regroup at home in preparation for the visiting Spurs.

San Antonio is in the middle of a rough patch. Although it was able to squeeze out a two-point win over Boston on Wednesday night, that was just a tiny break in what has been a losing skid for the Spurs. San Antonio entered its two-day back-to-back trip against New York City teams losing six of its last seven games, including last night in Brooklyn in overtime.

The Knicks previously beat the Spurs on the road on December 7th and enjoyed a 121-109 win. Sportsbooks have the Knicks as favorites for today’s game. Local New York residents can still take advantage of DraftKings’ current NY promo for new users while it’s available. The team is entering the game today as six-point favorites, so make sure to browse through the site before making your bet to see if there are better odds out there.

Like every other team in the NBA at one point or another, San Antonio is trying to make do with what it can, while key players are out for COVID-19 protocols.

Unfortunately for the Spurs, they already had a few absences during this losing stretch, but their COVID-19 issues compounded and worsened when they had four more players enter league health and safety protocols following their win over Boston.

Unsurprisingly, with three full-time starters and other key rotational players out, the Spurs struggled and lost to the Sixers.

White, who will be absent for Monday night, was the biggest threat in the previous Knicks-Spurs game on December 7th. He paced San Antonio with 26 points, six boards, and seven assists.

In light of all the COVID absences, more weight has been placed on Dejounte Murray’s shoulders. He recently came back from health and safety protocols himself and has added an immediate spark since returning to the team. He led the Spurs to that win over Boston and, even though Philadelphia turned its defensive attention to him with most of the Spurs’ core out, Murray continued to produce.

In the two games he’s played since returning from COVID-19 protocols, he’s been an all-around performer, averaging 22.7 points, 7.7 rebounds, 11.0 assists, and 2.7 steals per game.

The do-it-all point guard leads the Spurs in almost every statistical category this season, but he’s been playing extremely well recently.

The Spurs will also count on Jakob Poeltl and Lonnie Walker IV. Poeltl is a dependable big man, although he doesn’t have the most dazzling stat-line, he is enjoying a career-best season and is more important on the defensive end. He currently averages 12.5 points and 8.7 rebounds—all career highs.

As for Walker, the Spurs don’t have much wing depth with players out, so they didn’t waste any time reintegrating him against Philadelphia after getting cleared from COVID-19 one day before their game with the Sixers. He provides a scoring punch and much-needed energy off the bench. Last night in Brooklyn, Walker poured in 25 points in 33 minutes.

Outside of Murray, Poeltl, and Walker, San Antonio is missing four of its top seven scorers.

Only way is up, right?

It can’t get any worse than Saturday night, right? The Knicks will have to quickly put that frustrating performance behind them. New York posted a season-low 75 points on a night where only Immanuel Quickley seemed to be the only one able to find his shooting stroke.

Immanuel Quickley is on 🔥🔥🔥🔥 pic.twitter.com/NzvItcQwWM

Sure, Evan Fournier sat out after a dominant performance in the earlier meeting with the Celtics, but he likely wouldn’t have been enough to save the cold-shooting Knicks. Unsurprisingly or surprisingly—depending who you ask—despite the quick downward spiral after a solid start, coach Tom Thibodeau didn’t really try to mix things up or go to his bench. Obi Toppin was limited to just nine minutes.

Fournier, Nerlens Noel, and Kemba Walker are all questionable for the Knicks, per the injury wire.

That was the first time the Knicks scored fewer than 80 points this season.

Burn the tape, shake it off, mix it up, and move forward. Fortunately for the Knicks, the circumstances seem to be tilted in their favor with the Spurs’ COVID-19 issues, so they’ll have to capitalize and regroup.

There’s no way they have back-to-back massive letdowns, right?