Knicks Rematch on the Road With Sixers 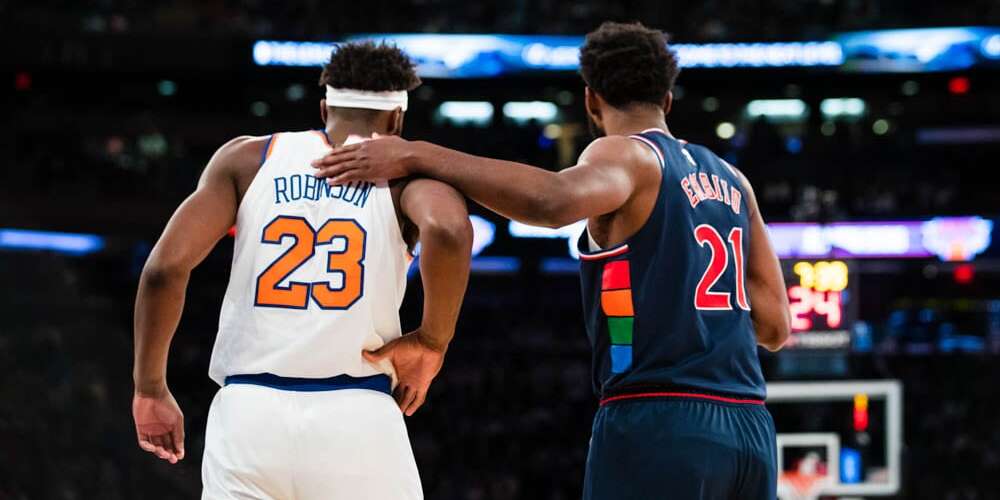 After the foul-heavy contest on Sunday, the Knicks begin a seven-game road trip with a rematch against the Sixers in Philly.

The New York Knicks (25-36) are on the road against the Philadelphia 76ers (37-23) as they look for a much different result from Sunday afternoon. The two teams have had a few days of rest coming off of the hard-fought, foul-stricken contest they last played against each other. Some hot shooting from Immanuel Quickley and Evan Fournier kept the Knicks close in the second half, RJ Barrett continued to build on his impressive stretch of play, Alec Burks remained at point guard, and Julius Randle displayed some real questionable shot selection. In the end, New York got run off the floor to end the game at the hands of the Sixers dynamic duo of James Harden and Joel Embiid.

How can the Knicks look to limit the success of that duo in their third game as teammates? Let’s find out.

For starters, not sending Joel Embiid to the line for a career-high 27 foul-shot attempts would be fantastic. He and James Harden combined for 37 attempts and they made 33-of-37. Knicks starting center Mitchell Robinson and backup rookie second-round pick Jericho Sims each fouled out of the contest mainly at the hands of Embiid and Harden’s masterful foul-drawing prowess. The rim protectors must stay in the game for the Knicks to have a chance on Wednesday. When both were forced to the bench in the fourth quarter, the ‘Bockers were forced to go small and the Sixers went into full-on attack mode.

Asking a player not to foul Harden or Embiid is like asking a newborn baby not to cry, but they must do a better job than they displayed Sunday. Not biting on pump fakes is probably the biggest shift New York can make to have better success in guarding the duo. Embiid and Harden are masterful at lulling defenses to sleep with their elite footwork and pump fakes in the lane. Robinson and Sims each were culprits of multiple Embiid pump fakes, getting them in the air ultimately sending the MVP candidate to the line—a lot. Both of those guys have impressive wingspans and athleticism, each can block or alter shots without jumping, so don’t bite on Embiid’s fakes!

Surely Embiid is thinking he can do exactly what he did to New York on Sunday again, and although it definitely could, this adjustment is crucial or else our big men will be watching courtside yet again before the game is over.

The insane volume of foul shot attempts for Joel Embiid and James Harden was the main contributor in the loss for New York. But along with the onslaught of shooting fouls, the sheer amount of turnovers was the nail in the coffin for the Knicks. On Sunday, the ‘Bockers turned the ball over 18 times, which the Sixers converted into 22 points. The Sixers only turned the ball over 10 times, which New York turned into 11 points. You just simply cannot give a team as good as Philadelphia eight extra possessions, especially if you’re going to send their two best players to the line 37 times, and expect to win. That the game remained close until the end shows that if the Knicks can clean up the turnovers and fouls, they have a shot at winning today.

Many of the turnovers were just boneheaded passes, but one area they must clean up is over-dribbling. The Sixers have a unique defense where the man guarding the ball-handler will funnel him into the painted area where Matisse Thybulle or Joel Embiid awaits, and both are the definition of disrupters on that end. Thybulle had multiple poke-steals last games when Knicks ball-handlers entered his zone. This is by design from Philadelphia, there’s a reason Daryl Morey refused to include Thybulle in any trade discussions. The Australian may not be the most gifted offensive player, but what he’s capable of doing on the perimeter defensively is special. The Knicks can avoid this repeating by getting into their sets early and often and keeping the ball moving. Dribbling the air out of the ball and a stagnant offense play into the Sixers’ strengths, but that’s kind of been New York’s modus operandi on offense all year, to be honest.

The Knicks Wall’s exclusive partnership with PrizePicks presents the picks of the night. First, with Knicks rising star RJ Barrett we’re going “over” his projected 31.5 combined points, rebounds, and assists. Barrett has smashed that over two games in a row, and as the Knicks continue to run the offense primarily through him, we can see him going over the projected 31.5 combined points, rebounds, and assists. Secondly, we are going with the “over” 23.5 points for Sixers star James Harden. He has also hit the over on this benchmark in his first two games with Philadelphia.

The Knicks are missing rookie wing Quentin Grimes with that right patella subluxation. Miles McBride is available after playing for the Westchester Knicks yesterday. Kemba Walker and Derrick Rose are out.

After tonight the Knicks head to Phoenix to take on the reigning Western Conference champions and the best team in the NBA this season.