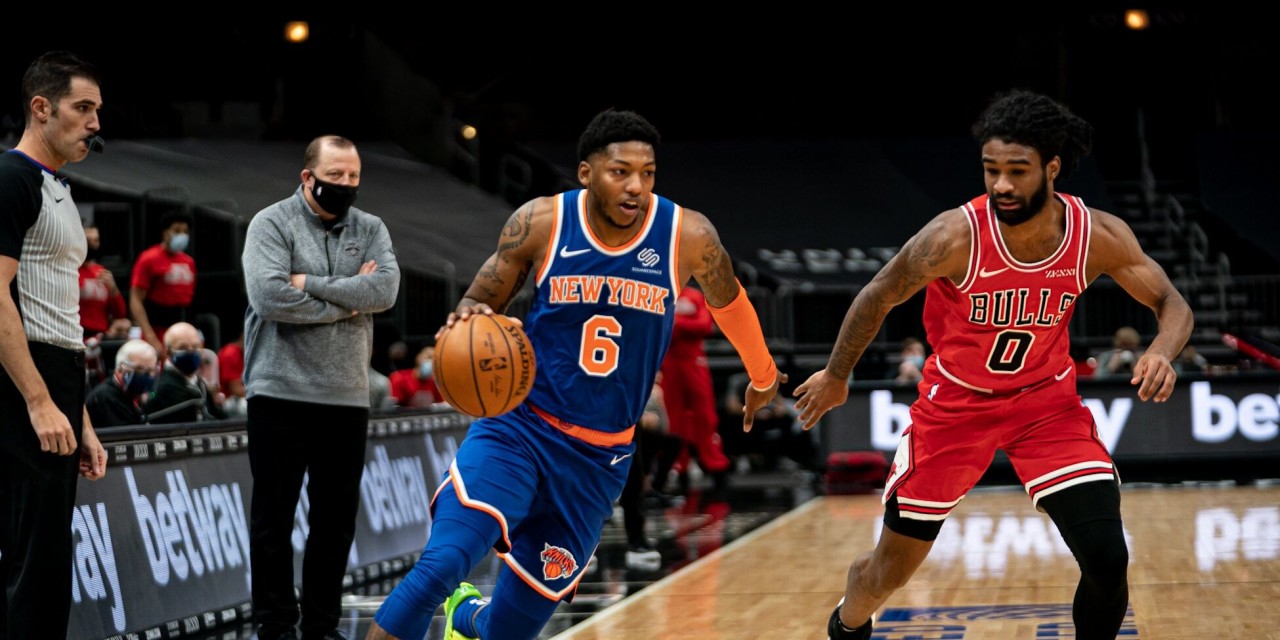 For the first time during the 2020–21 season, the Knicks will play a second straight game against the same opponent. It’s the Chicago Bulls.

The New York Knicks (9-13) will play their second straight game against the Chicago Bulls (8-11) tonight at 8 p.m. ET. Last game, the Bulls took advantage of a sluggish start from the Knicks to build a sizable lead. New York cut it close when they locked in, but they didn’t execute well enough down the stretch to snag the win. They’ll play one more game in the Windy City before returning home.

Playing the same opponent twice in a row is a first for the Knicks this season and a new quirk that the league is using in schedules to restrict travel. This is the first doubleheader against the same team of the season for the ‘Bockers.

New York kept it frustratingly close despite a listless effort on Monday night. The Bulls picked apart New York’s defense with ease. Thaddeus Young’s playmaking and Lauri Markkanen’s three-point shooting, in particular, were instruments of torture that Chicago utilized heavily. Contesting Markkanen’s long-range shots with greater urgency will be a key adjustment to make, as will recognizing if another Bull has the hot hand and not letting him heat up.

The Knicks were kept at arm’s length for the majority of the game because they went ice cold from beyond the arc. Alec Burks shot 3-for-6 on triples as a part of his 18-point performance and no other Knicks shot above even 30% from downtown. Immanuel Quickley (2-of-7 shooting from deep) and Julius Randle (1-for-4) were the only other Knicks to make a triple. Reggie Bullock, Austin Rivers, and R.J. Barrett combined to shoot 0-for-10 from behind the arc.

The Knicks lost again in Chicago but Immanuel Quickley was impressive once again off the bench.

Julius Randle had it going on in the first half by taking it at Markkanen, a weak defender. Taking advantage of that matchup could open up more looks for the offense. Going at Zach LaVine, another weak defender, would also be a smart plan. Although he’s not a strong defender, the shooting guard is an All-Star candidate.

The Knicks got a front-row seat to the LaVine Show in the second half of the last game. He scored 17 points in the second half, including two clutch shots with fewer than two minutes remaining, to help get Chicago the victory. SNY’s Ian Begley reported that the Knicks are monitoring LaVine’s availability.

Now, [SNY] reported over the summer that both the Knicks and the Nets were doing their homework on LaVine in the event that Chicago became open to trading the young shooting guard. Now, obviously, the Nets traded for James Harden, so LaVine is no longer on their radar. But he remains on the Knick radar as a potential trade target.

A scorer like LaVine would be a tremendously valuable addition to the Knicks, who are 25th in Offensive Rating this season. Using a combination of dexterity, explosive athleticism, and sweet shooting, LaVine is one of 13 players to average at least 26 points this season. At age 25, the 6-foot-5 guard is posting career highs across the board: 26.6 points per game on 51% from the field, 41.9% from beyond the arc, and 88.1% from the free throw line while adding 5.3 rebounds, 5.1 assists, and 3.5 threes. While Chicago’s up-tempo offense certainly helps him put up those gaudy stats, his versatile skill set would elevate New York’s offense.

Any thoughts of what LaVine would like on the Knicks will have to wait, though. Today, he’s New York’s opponent. The Bulls’ offense runs through him and, as the Knicks found out the hard way last game, he can score at will. New York was able to play at the slow pace they like but the Bulls offense still found ways to crack the code. In order to avoid their third three-game losing streak of the season, the ‘Bockers will need to return to their rugged style defense by fighting harder through screens and locking in mentally.