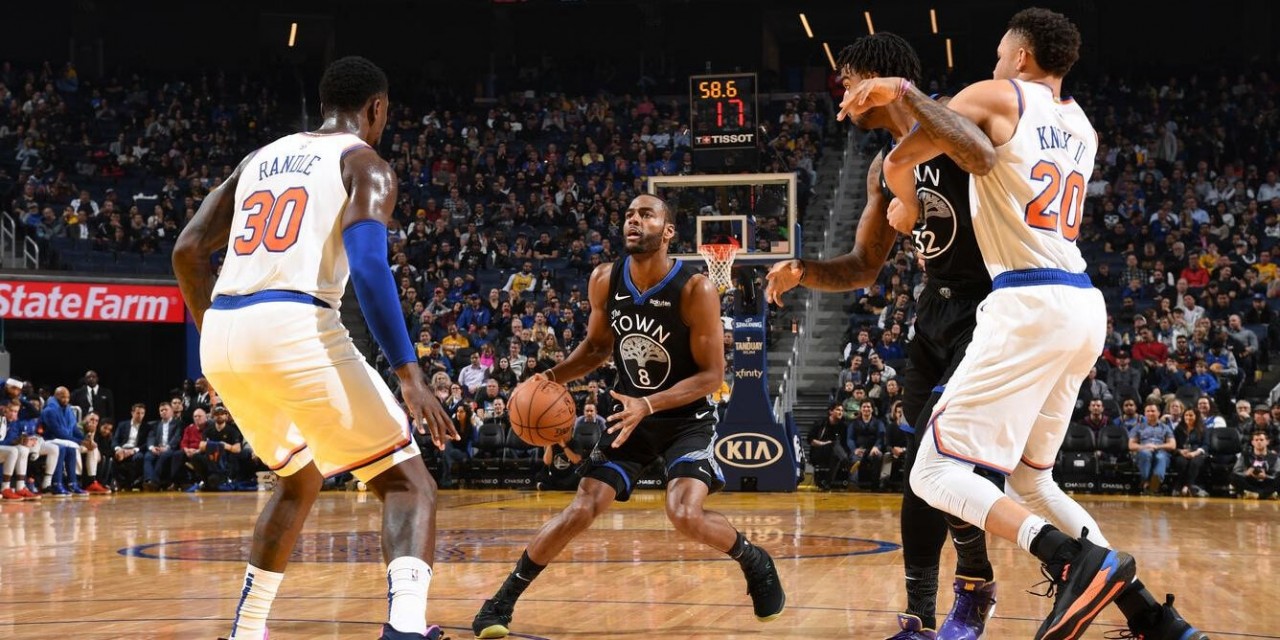 The Knicks nearly blew a double-digit second-half lead against the not-so-mighty Warriors on the road, but regrouped in overtime for the win.

In an infamous battle of futility, the New York Knicks (5-20) emerged victorious in San Francisco, 124-122, snapping their dreaded 10-game losing skid. After coughing up a lead as high as 22 points, New York was able to stave off the Golden State Warriors (5-21), who now find themselves in the cellar of the NBA standings. This evening’s win at the Chase Center marks the Knicks’ first win against the Warriors since March 30, 2014, per Land of Basketball.

New York began to pull away in the second quarter (a quarter that has usually given them nightmares in recent memory) but quickly unraveled in the second half as the Knicks did everything they possibly could to try and give this game away, as they missed clutch free throws, committed dumb fouls and a decided not to foul D’Angelo Russell in the final seconds to prevent a game tying three-ball, which D-Lo subsequently drained, sending the game into overtime. Russell, the only bona fide offensive threat the Warriors have, put up 32 points and six assists while knocking down six three-pointers. Draymond Green added a triple-double in the losing effort as well with 14 points, 12 assists, and 10 rebounds.

For one of the rare times this season the Knicks, got significant offensive contributions from multiple players, as three players scored over 20 points (Morris with 36, Randle with 24 and Barrett with 22). Bobby Portis and Elfrid Payton played good defense and also chipped in with 29 points off the bench between the two of them.

Clearly, Golden State looks absolutely nothing like the team that went on a dynastic run of three championships and five Finals appearance in the last five seasons leading up to this one, so a victory over the Dubs is hardly something to write home about. But hey, victories are hard to come by for the ‘Bockers these days, so let’s enjoy it.

Congratulations to Mike Miller on his first NBA victory as well.

After rumors surfaced that Marcus Morris could potentially yield a first-round pick in return if traded this season, he dropped a season high 36 points, one point shy of his career high. Tonight’s barrage marked his eighth 30-point output of his career, per ESPN Stats.

Mook is really a sniper and I love him for it pic.twitter.com/M9L36KId9w

Morris was extremely efficient tonight, doing his offensive damage on only 18 shots. Mook has easily been the Knicks’ best player all season and has held up his end of the bargain in terms of bringing a swagger and winning mentality back to the Knicks.

After playing awful basketball recently, R.J. Barrett finally found his groove tonight and had his most points since November 16th against the Hornets. Despite making a rookie mistake fouling Alec Burks on a jump shot and missing some key foul shots, the rookie was very good on Wednesday and looked more comfortable and confident than he has looked in a long while.

Barrett’s double-double (22 points, 10 rebounds) marks the second of his career and temporarily erased some concerns swirling around about if he is truly going to be a star in New York.

The Knicks are back in action this Friday against the Sacramento Kings.