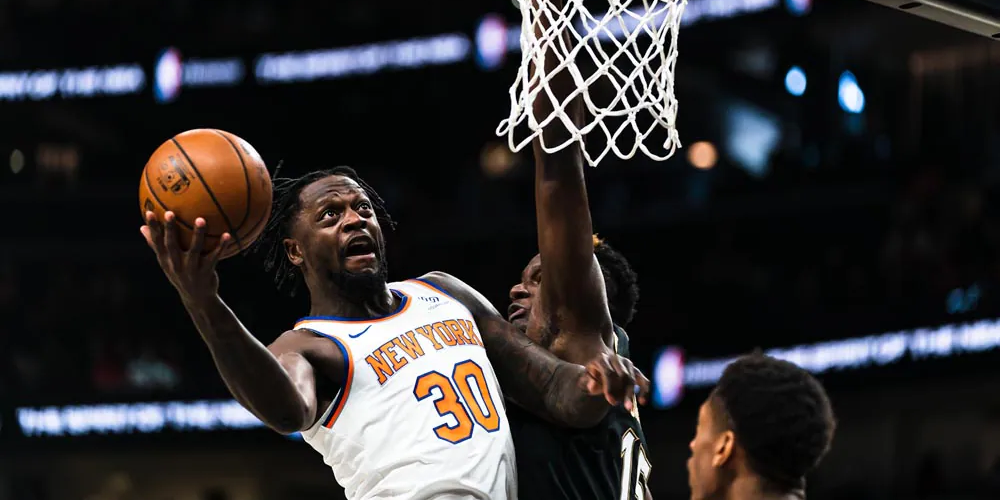 In the closing minutes of the Knicks’ devastating loss to the Hawks, multiple players unraveled and let their emotions show on the court.

ATLANTA, Ga. — As the final minutes dwindled down in the New York Knicks’ blowout loss to the Atlanta Hawks this afternoon, things got dicey between the two teams as multiple hard fouls were exchanged.

It all started with just under four minutes remaining in the fourth quarter when Reggie Bullock thought he received a hard elbow in the back from Danilo Gallinari. Bullock responded by rushing over toward the Hawks bench at the timeout, drawing the vet a technical foul call. Obi Toppin got in front of him, and Bullock needed to be restrained by several teammates, including the rookie.

Danilo Gallinari says he didn't know Reggie Bullock ran at him & ATL bench in 4thQ. Says that reaction normal bc Knicks were losing.

"I honestly didn’t know that Bullock was mad at me or running towards me. I didn’t see that. I was just going back to the bench to get my water." pic.twitter.com/P8zgfeIgTw

With that gone, the Knicks responded in the form of Julius Randle shoving Gallinari in the same minute of play. The referees immediately motioned for Randle to go over to the bench and ruled this foul a Flagrant 1 upon review.

A Flagrant One foul in the 2021 National Basketball Association pic.twitter.com/MACnFBwJ9s

The play came to the joy of Randle’s Knick teammates, as he exchanged high fives with most of them on his way back to the bench.

Julius Randle gets a flagrant 1. Teammates praise him. Reggie Bullock had taken an elbow earlier… pic.twitter.com/DLrouW5ESJ

“Gallinari had a dirty play on Reggie,” said Randle regarding the foul. “You can’t let that happen. I wasn’t trying to hurt him, but in this situation, you take a hard foul or whatever, just to let him know we’re not accepting this s–t.”

With the game 24 points out of reach at that point and the Knicks going down 3-1 in the series, it would seem tempers have started to flare out of the recent level of play. When asked if the issues toward the end of the game were a result of frustration, head coach Tom Thibodeau said the following:

“This is the playoffs, so there’s intensity to it. I don’t know if frustration is the right word, I would say maybe disappointment. But there’s resiliency to this team and we have to fight back, and we will.”

Aside from the scrap with the former Knick Gallinari, there were a couple of other chippy moments and flagrant fouls called in this game, too.

Earlier in the fourth quarter, Kevin Huerter grabbed Nerlens Noel’s leg after falling off a screen, sending the big man down to the floor. This dangerous play resulted in a Flagrant 1 foul on Huerter, and Noel got in Huerter’s face to warn him not to do that again.

“It’s just basketball, man,” said Taj Gibson on the squabbles in this game. “We’re all coworkers, we’re all in the NBA, we’ve all known each other a long time. It’s just the heat of the moment. It’s good for the sport. It’s nothing too serious, we’re all competitive. When you see the same team over and over again, things like that are going to happen.”

Gibson himself showed plenty of emotion on the court this afternoon, jawing off with Trae Young at one point on their way to a timeout in the second quarter.

Regardless of the chippiness on display in this game, the Knicks will have to find a way to channel this chaotic energy into winning basketball on Wednesday. Down 3-1, they will stave off elimination in front of a packed Madison Square Garden crowd.

“They (the fans) gave us a boost the first two games,” said Gibson on the homecourt advantage of Game 5. “At the same time, we have to give them a reason to cheer and give us a boost. They’ve been a sixth man for us.”

The team doesn’t seem to be scared at this point in the series, and Julius Randle sees no reason to count them out just yet.

“I like our chances, but it all starts from being positive,” said Randle about being on the brink of elimination. “I think that’s all we can really focus on. … I love our chances.”

»READ: After Game 3, R.J. Barrett is the key to getting back on track