Knicks Return From Road Trip, Square Off Against Pacers 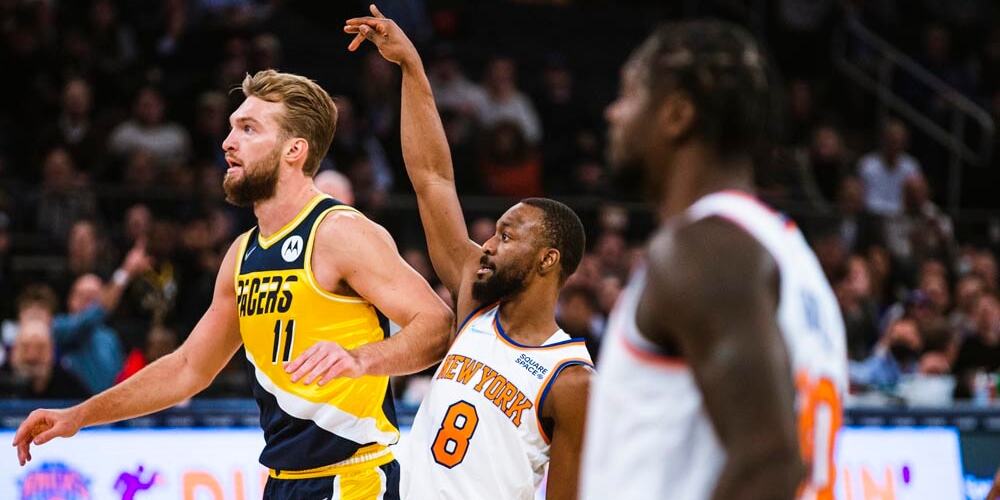 The Knicks’ brief winning streak was turned into a two-game losing skid. New York will look to start another one against the Pacers.

After another disappointing loss, this time at the hands of the Toronto Raptors, the New York Knicks (17-20) will return home to Madison Square Garden to take on the Indiana Pacers (14-23). The Pacers are coming into tonight’s matchup off of a 108-104 loss to the Cleveland Cavaliers on Sunday.

Both teams will be taking the court tonight without some of their top guns. New York will have to rely on RJ Barrett to be the focal point and provide some offense for himself while Derrick Rose is inactive. Barrett has played pretty well since Julius went out in the NBA’s health and safety protocols, though the team is 0-2 in his absence so far.

If the Knicks hope to come out of tonight with a victory they will need much more production out of the supporting cast. Alec Burks had a bit of an off game last time out, only going for 11 points in 27 minutes. Obi Toppin showed some flashes posting 19 points in a team-high 45 minutes but will need to be more consistent offensively to help the team efficiency improve and get them on track. Immanuel Quickley also had a quiet night going (3-for-8) from the field while only tallying 11 points.

For the Knicks’ sake during this stretch where they are missing scoring options, Quickley needs to be more aggressive in running the offense, looking more to score himself to get the team going. With all of the offensive firepower currently missing from the lineup, this trio will need to be much more involved offensively tonight for the Knicks to get back on track.

What’s up with Deuce?

On December 29th, Miles McBride posted a +39 plus-minus while being held scoreless on the offensive end. That just goes to show how much of an impact he has on the court to go along with his defensive tenacity. Despite the impressive performance he only logged 15 minutes against the Raptors after starting the game at point guard. He played the initial 4:44 of the first quarter but did not return to action until the game was out of reach in the fourth quarter when the deficit increased to 23.

When asked after the game about the reasoning for McBride’s benching, Tom Thibodeau said, “It was just the way the game was going,” via Marc Berman of the New York Post. “I felt we probably needed a little more offense to try to get things going. So we went back and forth with that before the game. We were hoping to find some rhythm with one group. We never really got there.”

Now, it could be nothing but that sounds like a coach trying to answer a question without actually providing any information on the situation. I would keep an eye on this situation as there had to have been a reason to leave your best perimeter defender on the bench while Fred VanVleet was torching the Knicks defense for an easy 35 points in 31 minutes.

Reinforcements on the Way

The Knicks announced that Mitchell Robinson as well as Jericho Sims were cleared from the health and safety protocols and rejoined the team. There has been no official comment yet on if they will be available tonight as they will need to ramp back up conditioning-wise before taking the court.

Julius Randle has been cleared from health and safety protocols. He will be listed as questionable (return to play reconditioning) for tonight’s game.

Robinson and Sims will provide some much-needed help on the boards. The frontcourt combo of Taj Gibson and Obi Toppin has been getting a little bit exposed defensively. The Knicks were outrebounded 44-30 by the Raptors and have had struggled with that since losing Randle and Robinson.

The Pacers are coming into tonight losing four straight and five out of their last six games. They will be looking to stop their slide against a depleted Knicks team. Like the Knicks, the Pacers also have multiple important players currently out in health and safety protocols, including lead guard Malcolm Brogdon and impressive rookie Chris Duarte. With the hiring of Rick Carlisle this past offseason and the talented mix of Domontas Sabonis, Myles Turner, and Brogdon, there were some playoff aspirations in Indy following a 34-38 season last year.

Seemingly, the season has not gone to plan, with the Pacers sporting a 14-23 record, the third-worst in the Eastern Conference. Ever since a recent report leaked from the front office that the Pacers were planning on being sellers at this year’s trading deadline they have been in a downward spiral. This is a good opportunity for the floundering Knicks to get back on track and even the season series against Indy.

Tonight’s contest tips off at 7:30 p.m. ET at Madison Square Garden. You can catch the game on MSG as well as NBA TV.

There is a long list of ailments for both teams tonight, so get ready for a matchup of the benches.