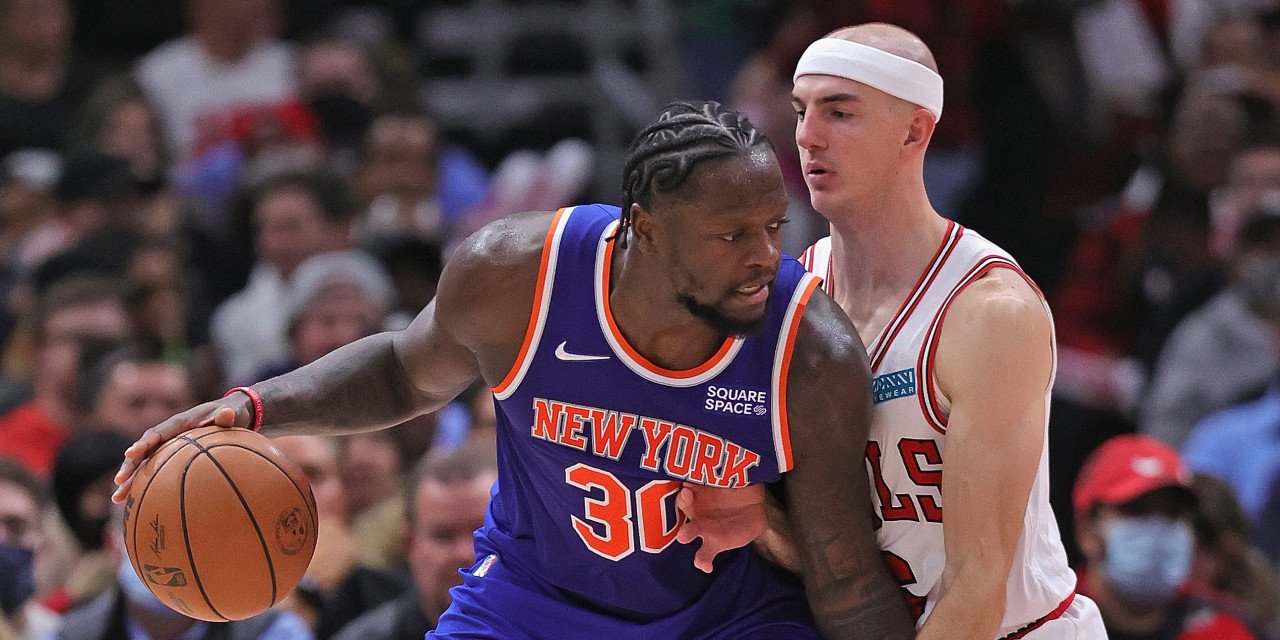 The Knicks will face the Bulls for the final time this season following a three-game, road winning streak.

The Knicks enter tonight’s contest after a close win in Detroit yesterday. Led by another good performance from the youth, the Knicks were able to get their third straight win and build some momentum for this young core. Julius Randle returned to the lineup and posted 20 points, seven rebounds, and five assists.

The Bulls have cooled off quite a bit after their rampant start to the season. Losers of 10 of their last 14 games, they will be looking to get back on track tonight. A part of their recent struggles has been the decline in the play of star forward DeMar DeRozan.

Now, I wouldn’t say DeRozan is the only or even the biggest reason for the decline, as he is still averaging 24.3 points per game in March. However, that average is down from the remarkable 34.2 points per game he was averaging in the month of February. Due to that stellar play from DeRozan and Zach LaVine to start the season, I think it is fair to say that the Bulls have already played their best basketball and that those heights they reached earlier on should not be the expectation going forward.

So, even with that said, how do the Bulls get back on track? While they might not have the consistency to still be atop the Eastern Conference as they were a month ago, they definitely have the talent to improve upon their recent slide. The DeRozan-LaVine tandem is no joke, as the Knicks have to come ready to defend.

The Emergence of Immanuel Quickley

Immanuel Quickley has been much improved as of late, averaging 16.7 points per game to go along with 4.3 assists over his last seven outings. He has also cut down on his turnovers while handling the ball even more. In Friday’s win against the Miami Heat, Quickley led the Knicks’ fourth-quarter comeback with 20 of his 23 points coming in the final period.

Propelled by Quickley’s great performance the Knicks went on a 38-13 run to close the comeback out and get the win. He provided similar heroics against the Pistons. With Derrick Rose not expected to return to the lineup this season, there is no reason that Quickley shouldn’t continue to get extended minutes over Alec Burks.

I would even like to see Quickley start the game and get more run than Burks, but that doesn’t seem like a feasible option with this coaching staff. They earn what you get mantra is starting to get very old as Quickley and McBride are making great contributions with their minutes and very clearly have earned more. If they continue to get meaningful minutes to end the season the Knicks will have a better understanding of what they have going into next year. A wild concept that should have been tried probably at least 20 games ago.

The Knicks Wall’s exclusive partnership with PrizePicks presents the picks of the night. Tonight, we’re going to Julius Randle to come out on top. We’re picking “over” on Randle’s projected combined 35.5 points, rebounds, and assists. As for the Bulls, we’re going “over” on All-Star DeMar DeRozan’s projected combined 32.5 points, rebounds, and assists.

Lonzo Ball is Chicago’s only real scratch tonight as he rehabs from a meniscus tear. Quentin Grimes is questionable for the Knicks after missing his first game yesterday back from an injury stint where he returned on March 18th. Derrick Rose, Kemba Walker, Cam Reddish, and Nerlens Noel continue to be sidelined.

You can watch the game on MSG Network and NBC Sports Chicago at 7:30 p.m. ET.