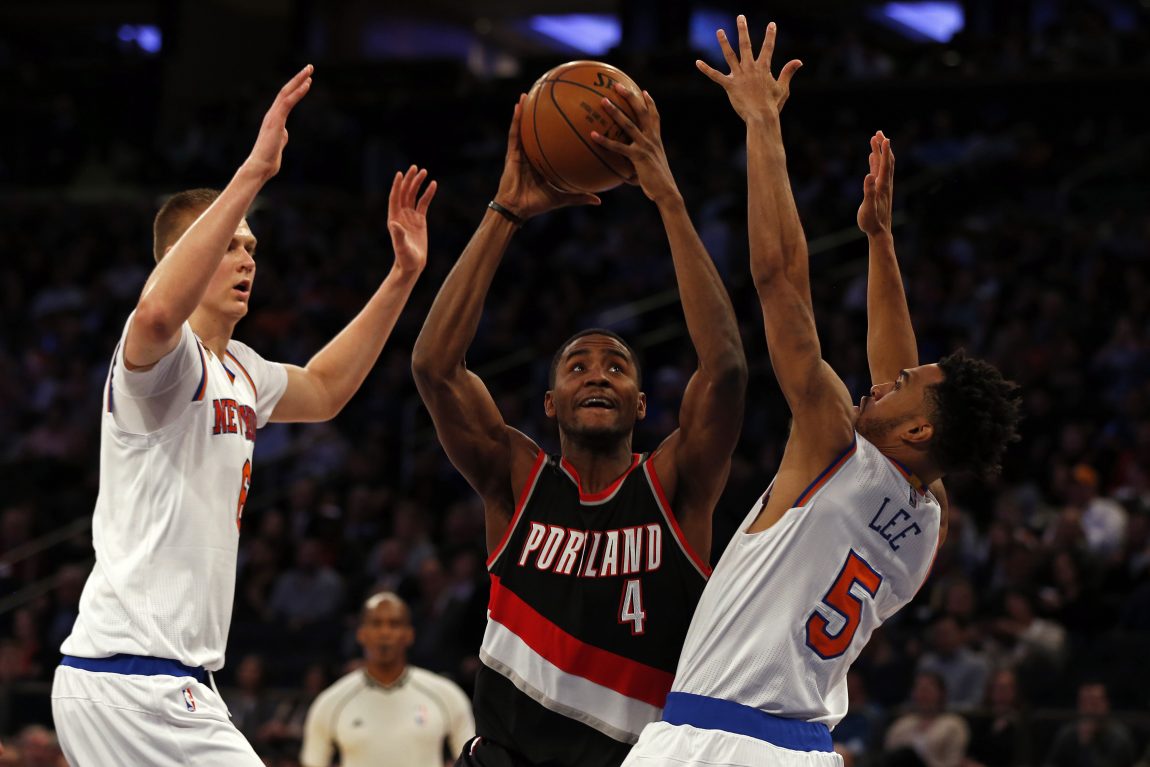 After dropping two road contests, the Knicks are back at the Garden to face Damian Lillard and the Portland Trail Blazers.

Madison Square Garden has never been a more welcome sight. One thing that has become blatantly obvious in this young season is that the Knicks are not good on the road. Jeff Hornacek’s bunch took two on the chin over the weekend, with the loss in Atlanta especially painful. There was not much expectation to win in Houston without Kristaps Porzingis and Enes Kanter, but the loss to the Hawks should bother this team.

To win this game, the Knicks will have to be strong up front and crisp on offense. The one positive from their loss in Houston was that they shared the ball (29 assists) and cleaned the glass (40 rebounds). Michael Beasley helped fill in for the scoring void left by Porzingis’ absence, which is a role that the Walking Bucket could carve out for himself if KP misses games in the future.

But all we care about is the now. Tonight, the opponent is the Portland Trail Blazers. What do the Knicks need to do to get off the schneid and get a W? Let’s break it down.

As much as I have grown to love Frankie Ntillmatic, the facts are the facts. Lately, he’s been bad. This is expected from a 19 year old rookie, but when the bench as a whole has struggled, his problems can’t be overlooked. The good news is Hornacek is aware. Recently, the coach has been the one calling plays from the bench, allowing Frank to just play:

While Frank Ntilikina is learning the offense, I've noticed Hornacek calling plays from the bench. Watch this play as Ntilikina does a nice job recovering from trap to find roll man. For @TheKnicksWall #Knicks: pic.twitter.com/zsWmxMDcMI

Lessening his load on offense, even if it’s as small as calling the plays from the bench, allows the rookie to think less and act more. Tonight, his defense will be his greatest asset, as he will have to face Damian Lillard and C.J. McCollum. Both are elite scorers with great shots. Courtney Lee will take one of these tough assignments, but Frank must be able to hold his own if the Knicks are going to pull this out.

Porzingis’ big scoring night in Atlanta was overshadowed by the disappointing loss. He finished that game with 28 points while shooting 50 percent from the floor (and from three) and added a pair of blocks. Those two areas have become locks for KP to excel in. It’s the rest of his game that has yet to catch up.

Against the Hawks, the 7’3” Porzingis pulled down a grand total of four rebounds–none on the offensive glass. He added just two assists despite being swarmed by extra defenders. He can expect to see that attention tonight and throughout the season. Tonight, he should make a concerted effort to attack the glass and find his teammates when the doubles come.

I’m not suggesting he pull a Russ and focus on getting a triple-double. However, having a five assist game or a ten rebound game is well within reason. Porzingis has become a star and might even enter the superstar conversation given how legends have glowed about him. Superstars do a bit of everything, and it is time Porzingis started doing just that.

Not all losses are bad. The loss to the Rockets couldn’t have felt great, but Hornacek learned more about his bench. So far, Hornacek’s rotation has been tight with Doug McDermott, Kyle O’Quinn, Lance Thomas, and Frankie as the tail-end of the rotation. Injuries forced Michael Beasley into the starting lineup and Willy Hernangómez into the rotation on Saturday.

The results were mixed, but Beasley proved that he can still be the scoring spark plug we have known him to be. He was also decent in ball movement, which was a nice surprise. Don’t believe me? Look for yourself:

Michael Beasley scored 24 first half points and did a few other things I liked, for @TheKnicksWall: pic.twitter.com/7H6OgrL1pp

Willy, on the other hand, struggled. I’ll attribute it to rust, which can happen when you play spare minutes. Still, when he’s on the floor, you know you’re getting someone who can rebound and get their own shot.

It’s nice that Hornacek was able to make a nine-man rotation work, but the 82-game grind will require every single player. Given Beasley and Willy’s ability to score, why not give them 15 minutes while Tim Hardaway Jr., Courtney Lee, and KP get some rest? Don’t forget about Damyean Dotson, who is reminiscent of the first version of THJ.

Other than McDermott, no other players in the current bench rotation can score with much consistency. Leads seem to evaporate when the starters aren’t in, and a big reason for that has been the lack of scoring.

Match up of the Night: Enes Kanter vs. Jusuf Nurkic

Enes Kanter remains questionable with back spasms, but I’m banking on him playing tonight. His team feeds off his energy just as much as the offense feeds off his offensive rebounding. Jusuf Nurkic plays a similar role for the Blazers. Lillard and McCollum have been searching for that final member of their big three–hence the heavy recruitment of ‘Melo last summer. Nurkic has been a silent partner in a Blazers big three.

This season in Portland, Nurkic has averaged a career-high in points (15.2), rebounds (7.7), and assists (2.0). He has also averaged a career-high in shot attempts and free-throw attempts. When he is playing well, chances are the Blazers are playing well. With Kanter optimistically back tonight, there will be quite the battle of the bigs beneath the rim. If Lillard and McCollum are missing shots, and Nurkic is unable to pull down boards, then the Knicks will be in good shape. If Nurkic is on the bench in foul trouble, the Knicks are in tremendous shape.

The great thing about Kanter is that he is a disruptor on multiple levels. He can wreak havoc in the post. He can piss off his opponent. He is pretty much everything the most optimistic of Knicks fans hoped for when the team signed Joakim Noah two summers ago. Right now, Kanter has the crowd in the palm of his hand, so having his infectious energy back would be huge for New York tonight.