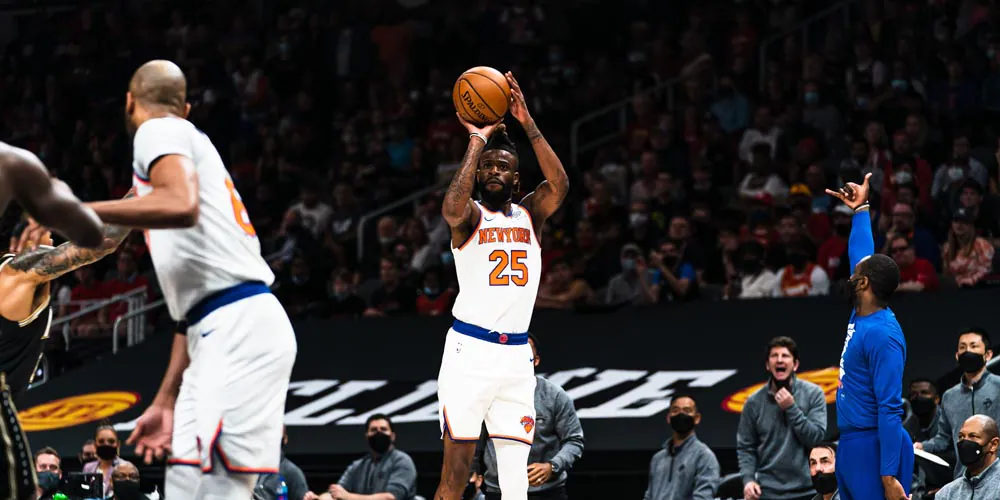 With their first playoff series in eight years on the brink of ending, the Knicks try to save face and force a Game 6 in Atlanta with what could be their last fight in 2020–21.

The New York Knicks’ (1-3) hopes of advancing in this year’s NBA playoffs took a significant hit this past weekend, as they dropped two straight games in ugly fashion to the Hawks (3-1) down in Atlanta, which has put them in a daunting 3-1 hole in this first-round series. Now on the brink of elimination, New York faces a must-win matchup as they look to feed off of the raucous Madison Square Garden crowd and keep their season afloat.

After an inspiring comeback win in Game 2, the Knicks have looked flat and seem to have had a lid put on their basket since then. The Knicks’ shortcomings have provided this young Hawks team confidence and it is evident that they smell blood and are hungry to close out this series. It will be crucial for the Knicks to come out of the gates hot, keep Atlanta’s sharpshooters at bay, or the likes of Trae Young and Clint Capela, who have been doing some chirping this series, will be laughing and dancing on the grave of the Knicks on their home floor.

Despite New York’s wonderful 2020–21 campaign, their offensive limitations have been well-documented. It was clear that the Knicks lacked the firepower of other Eastern Conference foes like Brooklyn, Milwaukee, and Philadelphia but were able to overcome their pedestrian offensive outputs with timely shot-making and elite defense.

With the Knicks slipping a bit defensively, their offensive deficiencies are rearing their ugly head and have cost them big time in this series against a Hawks team that excels at shot-making. The Knicks have not scored under 100 points in consecutive games this season since January 10th and 11th but have managed to do that in Games 3 and 4 of this series.

A simple key to victory this evening is more consistent shooting throughout the game and it is a star-driven league. If you look across the floor at the Hawks, who is leading their team in this series? It’s their stars Trae Young and Bogdan Bogdanovic.

If the Knicks’ big guns, Julius Randle and R.J. Barrett, are M.I.A. again and shoot 4-of-24, as they did in Game 3, it will be a long night in the Big Apple for the men in the orange and blue.

One of the very few bright spots of this series for New York has been the play of Derrick Rose, who is averaging 22.8 points per game and has been the Knicks’ only consistent offensive threat. Give a ton of credit to Rose, who has resurrected his career to a degree and has been lethal from all parts of the floor in the four games against the Hawks. At this point in D-Rose’s career, however, you cannot win a playoff series with him as your most productive player.

Rose has had to shoulder too much of the load this series with Barrett and Randle struggling mightily for a large portion of these games. If Rose is the leading scorer when all things are said and done this evening, there is a likely chance that the Knicks won’t emerge victorious. This is no knock on Rose, who has been terrific, but he can only do so much at 32 years old and considering his injury history.

After a slow start to the season for Obi Toppin, where he looked timid and uncomfortable on the floor, the 23-year-old has done what every fan base wants to see from their rooks and made steady improvements to his game. In this series, Toppin has provided a nice burst of energy for the Knicks with his dunks but has also been quicker to pull the trigger on jump shots, a department where you wouldn’t see much in earlier this season.

Toppin with the tip in pic.twitter.com/REO0C0YbZh

Toppin’s athleticism and joy are infectious and he already is a fan favorite at MSG, given that he is a New York native and someone who has displayed such passion for playing for the Knicks. Look for Tom Thibodeau to try to get Toppin even more involved in this game, as he has the ability to wake the Knicks and the crowd up with his exciting brand of basketball.