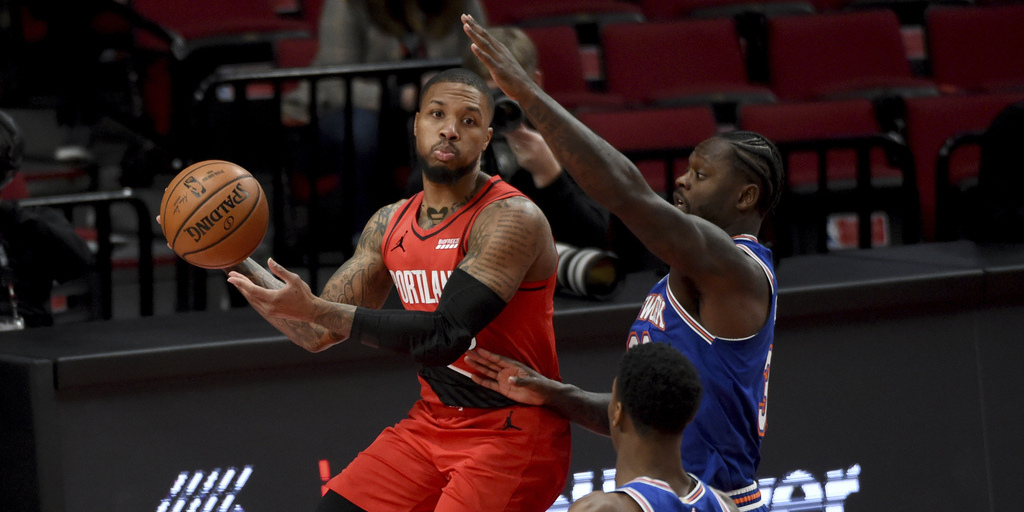 The Knicks face the Blazers for the second time this season on Saturday. Damian Lillard, once questionable, is expected to play.

The New York Knicks (10-13) will be back at home on Saturday to play the Portland Trail Blazers (12-9) at 1 p.m. ET at Madison Square Garden. This game comes after two straight in Chicago, which the Knicks split, losing on Monday 110-102 and winning on Wednesday 107-103.

This is the second and final matchup between New York and Portland this season after the Trail Blazers topped the Knicks at the Moda Center 116-113 on January 24th. The Knicks were down by as many as 25 points in that game but cut the lead in the second half before falling just short in the end. Immanuel Quickley led the Knicks in scoring that game with his career-high 31 points.

Portland comes into this game on a two-game winning streak, having beaten the Wizards 132-121 on Tuesday, and the Sixers 121-105 on Thursday. As we get closer to the start of the game, the NBA odds page here will be updated to reflect the current game stats.

That being said, here are storylines to watch out for in this game.

Portland currently sits at fifth in the Western Conference but could be even higher if not for their significant injuries this season. Shooting guard C.J. McCollum, who’s averaging 26.7 points per game this season, hasn’t played since January 16th with a foot injury. He’ll likely be out for the rest of February. As a result, Gary Trent Jr. has been in the starting lineup lately.

Center Jusuf Nurkic has also been sidelined with a wrist injury since January 14th and is unlikely to come back until March. He was averaging 9.8 points and 7.7 rebounds per game this season. Former Knick Enes Kanter has replaced Nurkic in the starting lineup, with 13.1 points and 13.6 rebounds per game in nine appearances, playing 30.6 minutes per contest.

Star point guard Damian Lillard missed the Blazers’ last game against the Sixers with an abdomen injury. Lillard is averaging 29.1 points on the season and is on track to play in Saturday’s game along with forward Derrick Jones Jr., who’s missed the last four games and hurt the Knicks last time around. Forward Nassir Little, who missed the last game, is questionable.

As fans will remember from his time in New York, Kanter is a liability on defense. He currently has a -2.1 defensive box plus-minus this season.

This should be a big game for Julius Randle, who is averaging 22.6 points on the season, several of which come in the paint. Randle had 25 points, seven rebounds, and five assists against Portland in the first game these teams played this season.

Immanuel Quickley is only averaging 19.3 minutes per game this season, despite averaging 12.4 points. Given his efficiency and play thus far this season, fans have been begging for him to start over Elfrid Payton.

While Quickley hasn’t been given a start yet this season, he played five straight games of 22 minutes or more, starting on January 24th at Portland and going through Monday’s game at Chicago. However, in Wednesday’s game at Chicago, Quickley only played 13 minutes to Payton’s 35. Payton scored 20 points on 20 shots. Not the most efficient performance.

The Knicks won the game, but Quickley’s minutes will be something to watch going forward. Even if Payton is having a decent game, there’s no reason to reduce Quickley’s minutes. He’s arguably been the second or third best player on the team this season.

Knicks center Nerlens Noel is out today, according to the team.

The article was updated after publishing due to the Noel injury, reported a few hours before tip-off.