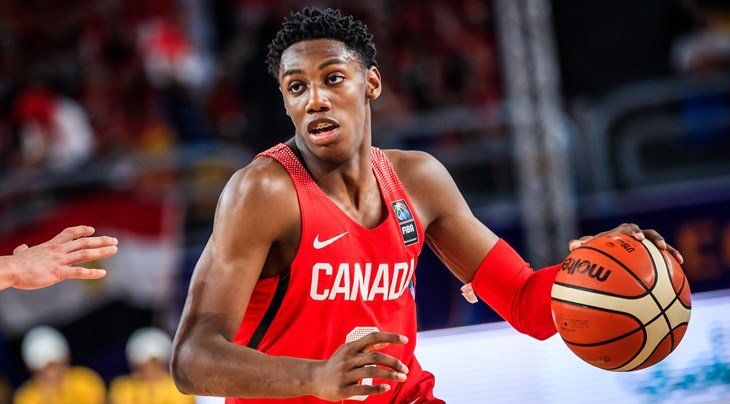 The third overall pick in this year’s draft RJ Barrett has a “mild” calf strain and won’t be playing with his home country of Canada in the FIBA World Cup.

New York Knicks first-round selection R.J. Barrett, a Canadian native, will not play with his nation’s qualifying team at the 2019 FIBA World Cup in China this summer, The Athletic’s Shams Charania reports.

Barrett, per Charania, suffered a “mild” calf strain in the NBA’s Summer League in Las Vegas, Nevada, in July and is managing the ailment. The 19-year-old, who was picked third overall in the 2019 draft, will go to the Canadian national team’s training camp; however, he won’t have a chance to play on the international stage—at least this summer.

Barrett will join Canada for training camp and team activities in Toronto. He's had a decorated young national team career — being one of youngest players to represent Canada, participating in competition the last four summers and helping the program qualify for World Cup. https://t.co/K54giU0tUx

The 6-foot-7 wing’s father, Rowan Sr., is Canada men’s basketball’s general manager and has seen his son excel with the Canadian national team over the years despite R.J.’s juvenile age. Barrett won the gold medal with Canada at the FIBA U-19 World Cup in Egypt in 2017. Being a mainstay of the Canadian team, Barrett is going to team activities in the lead-up to the World Cup, but his absence will be mightily felt due to his parental connection and track record as a “decorated” member of the national team.

Barrett will have competition heading into the Knicks’ own training camp and preseason with the summer free-agent acquisitions of Reggie Bullock and Wayne Ellington. Additionally, New York is carrying third- and second-year wings Damyean Dotson and Allonzo Trier, respectively. Barrett will conceivably get every chance available to prove his mettle and figure out his kinks at the NBA level under second-year head coach David Fizdale.

While it’s disappointing not seeing Barrett compete for his own country—Frank Ntilikina, for instance, is suiting up for Team France this summer—the 19-year-old is seemingly taking his health as a first priority before his looming rookie year in the Association.