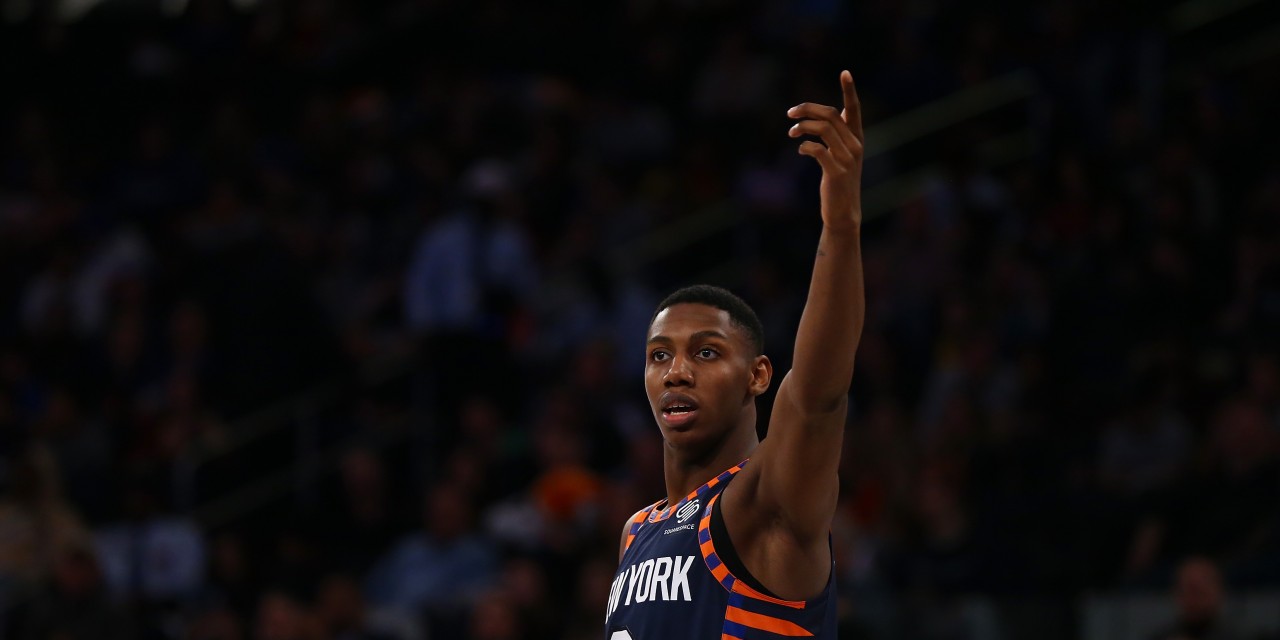 The Knicks host the Sixers in the first home game of the regular season. Rising star RJ Barrett is already feeling the need to defend home turf.

NEW YORK — R.J. Barrett’s sophomore season has gotten off to a promising start.

After leading the New York Knicks in scoring in the preseason with 17.8 points per game, the second-year forward out of Duke scored 26 points on 11-of-15 shooting from the field, making all three of his shots from beyond the arc in the team’s opening game against the Indiana Pacers. He added eight rebounds and five assists and committed only one turnover. His 11 field goals are a new career-high and his 26 points are just one basket shy of his career-high.

Barrett’s improvement could attract more attention his way from opposing defenses. Ahead of New York’s second game of the season, he was asked how he would respond to defenses that keyed in on him. “I think basketball is basketball,” Barrett said, “We got a great system that we try to run offensively. We have a whole team. If we move the ball [and] play together I feel like it’s gonna be tough to key in on anybody on the team.”

After being selected third overall in the 2019 draft, Barrett had an up-and-down rookie campaign. He flashed impressive driving abilities and solid playmaking abilities, but he was also inefficient. While New York’s putrid floor spacing made it tough for the neophyte to take advantage of his greatest strength, his scoring efficiency was inarguably bad. He shot 50.9% on field goals five feet or closer and he didn’t reach 40% in any other area of the court, according to NBA.com.

Barrett said that having a year of professional experience has allowed him to understand the game more. “Being able to know little nuances of the game, kinda know what defenses are gonna do a little bit better. I’ve been able to prepare myself even more now, just knowing what I’m getting into,” he said. Still, he admitted that he isn’t satisfied with the player he is right now. “I definitely still gotta get better. I’m nowhere near where I wanna be,” he added.

Through a few exhibition matches and one regular-season game, Barrett already looks like an improved player. Despite playing with a lineup that still doesn’t offer many good floor spacers, his scoring efficiency has increased. His mid-range jump shot and free throw numbers, in particular, look much improved. For a strong slasher like Barrett, free throw shooting will be key. He converted 86.7% of his 3.8 free-throw attempts per game across four preseason contests.

The Knicks will play their home opener against the Philadelphia 76ers tonight. Although the Knicks will get back to playing in Madison Square Garden—while debuting their City Edition jerseys that don the phrase “City Doesn’t Sleep”—the Garden’s aura will be much different. MSG will be without an audience, for the time being, stripping the stadium of its well-renowned passionate and energetic environment.

Barrett suggested that having no fans in the stadiums could be advantageous for New York. “If I was a competitor coming into the Garden with all those fans, I would wanna have a great game,” he said. “So, coming in there with no fans actually, probably gives us an advantage that way, too. You just gotta go out there and play basketball.”

Even though that atmosphere still has yet to return, Barrett acknowledged that that atmosphere is special by saying that the Garden is his favorite place to play. “Gotta protect home court. Anybody that comes into New York, we gotta try and defend what’s ours,” he said.

RJ Barrett on playing in the Garden: "MSG is the best place to play, in my humble opinion. Gotta protect home court. Anybody that comes into New York, we gotta try and defend what's ours."

The Knicks, Barrett said, are practicing to be a “48-minute team. That’s what we’re stressing. Trying to play elite-level basketball throughout the whole game.” The Knicks will need to play at that level to get off to a good start this season, as six of their first eight opponents were playoff teams in each of the past three seasons. The Sixers, boasting All-Defensive Team members in Ben Simmons and Joel Embiid, will be a great challenge for Barrett and the team. Philadelphia defeated New York in all four of their matchups last season.

“It’s tough to win in this league,” Barrett continued. “It takes a lot, it takes everyone. And that’s what we gotta continue to do.” While the team’s improvement and cohesion as a whole are important to monitor, Barrett’s production will be one of the most telling factors on how good this team can be now and in the near future. The development of his game is crucial to the Knicks as they look to snap their seven-year playoff drought.

»READ: It will be tough sledding against the retooled Philadelphia 76ers