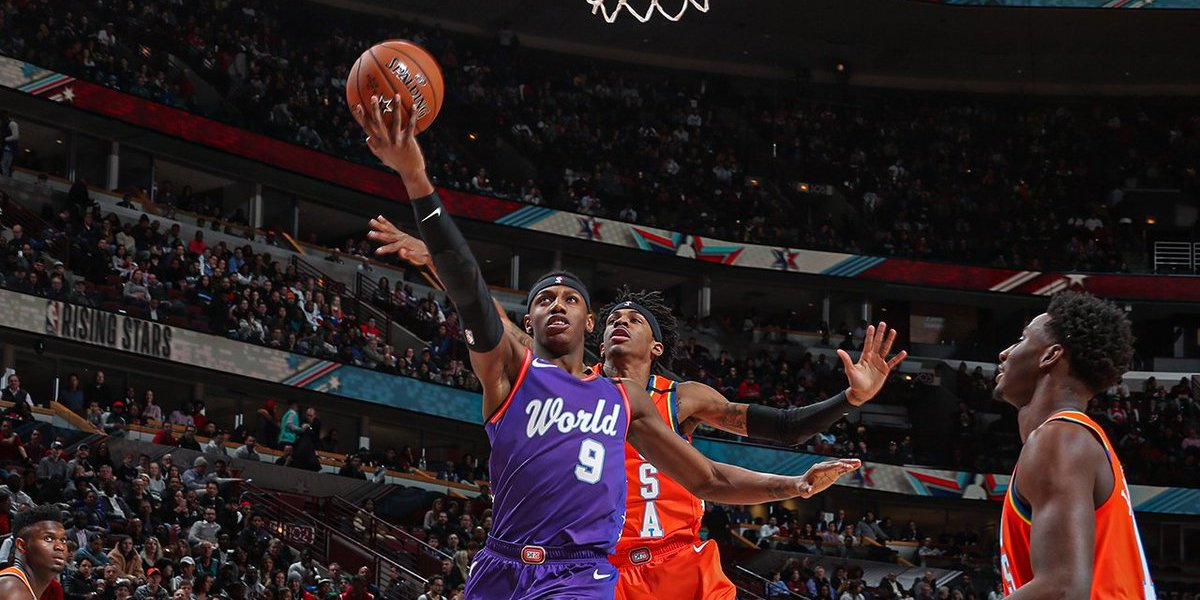 Knicks rookie RJ Barrett led Team World in scoring at the Rising Stars Challenge during the NBA’s All-Star weekend in Chicago on Friday.

R.J. Barrett represented the New York Knicks on Team World in the NBA’s 2020 Rising Stars Challenge on Friday night in Chicago during the All-Star weekend. The rookie made a statement in the exhibition match super serious, highly competitive contest.

Barrett got to work right away, scoring Team World’s first bucket on a strong take to the hoop.

Starting off for Team World ? pic.twitter.com/GyIP8AtDAv

Later, Barrett picked off a pass from playmaking extraordinaire and All-Star Trae Young of the Atlanta Hawks and showed him how it’s done, throwing a fast-break dime to Washington Wizards rookie forward Rui Hachimura. The two connected in transition a couple of minutes later.

Barrett continued to show his floor general tendencies by running the fast break and recording a hockey assist to fellow Canadian Brandon Clarke, a rookie forward for the Memphis Grizzlies. He threw Clarke a lob himself after intercepting a pass from his buddy and former Duke teammate, Zion Williamson, and added two buckets inside before subbing out.

In his next shift, Headband Ro stripped Kendrick Nunn and took it right to the cup. He got fouled and made two free throws on the next possession and converted the foul shot on an and-one later on. But I thought he couldn’t make free throws?

Barrett recorded another and-one on Rookie of the Year favorite Ja Morant before the half ended. He finished the first half with a game-high 15 points on 6-of-10 shooting to go along with three assists and three steals.

Barrett scored on a strong layup two minutes into the second half after unselfishly letting his teammates get some shots. Shortly after the score, he dropped another dime for Clarke and then sunk two more shots from the charity stripe.

Put it right on the sweet spot ? pic.twitter.com/uwmvV3LpYp

The fourth quarter was meaningless, as Team USA caught fire and went up by 21 points by the time the Knicks rookie checked back in. Barrett muscled in a layup and then fed Clarke on another fast-break bucket. Roles reversed shortly after, as Clarke threw a lob to Barrett.

Barrett concluded his night by throwing down a vicious reverse slam dunk, upstaging his pal, Williamson, who many believe to be the stronger dunker of the two.

Knicks made the right pick. pic.twitter.com/X7cnvOuMDy

Barrett finished with a game-high 27 points along with six rebounds, five assists, and three steals on 11-for-17 from the field and 5-of-6 from the free throw line. He showed off how great of a teammate he is, too, vibrantly celebrating when his teammate Luka Doncic made a halfcourt shot and not rudely bending any rims like Williamson.

Barrett’s strong performance sits front, center, and alone in his case for Rookie of the Year.