Knicks Look to Extend Winning Streak Against Harden and Rockets 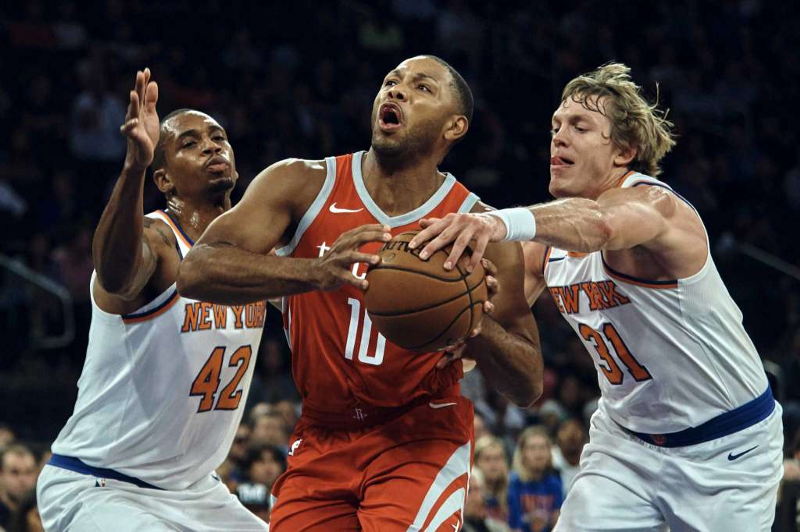 The streak sits at three. Up next is James Harden and the Houston Rockets for Wednesday showdown at the Garden.

What a time. That 0–3 start (0–8 counting preseason) feels like ages ago, but the Knicks are back in business baby! Jeff Hornacek has let the young guys run and the Garden has been re-energized. The team is on a three-game winning streak with no sign of stopping.

Okay, I may be getting a little ahead of myself, but how can you not be hyped off these last three wins?

Friday night against the Nets was whatever. However, winning in Cleveland against a healthy Cavaliers team? Impressive. Not only did the Knicks win in Cleveland, they blew the defending conference champs out of the water. Then, on the second leg of a back-to-back on Monday, Kristaps Porzingis put known NBA Analytics Twitter darling, Nikola Jokic, on the Summer Jam screen. This streak has so many storylines to follow that Jarrett Jack becoming a useful starter might not even crack the top three.

Up next: the young ‘Bockers will welcome the Houston Rockets to town. With Chris Paul sidelined due to a knee, these look like a slimmed down version of the Rockets from last year. James Harden is still a top five player in the NBA and reigning Sixth Man of the Year Eric Gordon is poised to defend his title, averaging a career-best 24.9 points through Houston’s first seven games.

The Rockets enter the Garden coming off a home loss to Sixers and will be looking to pick up an easy W against the Knicks. How can the Knicks keep the streak alive? Let’s break it down.

Since Jarrett Jack has entered the starting lineup, the Knicks have not lost a game. Jack has been everything Ramon Sessions was brought in to do. The starters have come out firing on all cylinders in the three games Jack has started, and it’s not a coincidence. Jack’s success is due to nothing special, but that doesn’t mean it’s insignificant; his NetRtg is a career-high 7.3, per NBA.com/Stats.

In a nutshell, he has been a coach on the floor. He is constantly talking and making sure everyone is in the right place. For a more detailed breakdown on Jack please watch The Knicks Wall’s resident Scorsese’s, Jeffrey Bellone, video below:

But I digress. Jeff Hornacek would be wise to keep this starting lineup in tact. Jack plays like a man on a short leash (non-guaranteed deal), which is good. It’s making him play smart. His presence has made Tim Hardaway Jr. better as well as Enes Kanter who is finally playing a lick of defense. And above all, Jack is feeding Kristaps Porzingis who in turn is torching the league.

Through his first six game, Porzingis has eclipsed 30 points five times. The last player to do it for the Knicks? No one! In fact, Porzingis is just the fourth player in league history age 22 or younger to do so.

Kristaps Porzingis is just the 4th player in @NBA history to be age 22 or younger and score 30+ PTS in 5 of his first 6 games of a season. pic.twitter.com/yzcTUgsrno

This is what we expected when Carmelo Anthony moved on to greener pastures. But I’m not sure even this was expected from people with the highest expectations. Porzingis has been a flamethrowing dragon on the court. He’s devoured opponents down low. Scorched threes from the logo. Dwarfed double teams. He has even channeled his inner ‘Melo.

He is coming off a career-high 38 points against the Nuggets, who have legit All-Stars in Paul Millsap and Jokic. The Rockets do not possess such a guy. Instead Porzingis will have Ryan Anderson, Trevor Ariza, and P.J. Tucker guarding him. It does not matter. Right now the only person capable of stopping KP is KP. The Rockets are the next on the list to feel the wrath of the new face of the Knicks.

Match up of the Night: James Harden vs. Tim Hardaway Jr.

I have not mentioned Hardaway Jr. much for good reason. Tonight is the night he can shut up whatever doubters remain. Is he a future superstar? Of course not. Can he be a staple of the starting lineup for the foreseeable future? Absolutely.

Through the first three games, the $71 million the Knicks handed Hardaway Jr. looked a lot like buying a slice of pizza in Midtown — way too overpriced and below average in quality. However, in his last three matches he has been in fuego mode.

Timmy has averaged 19.3 points, 4.3 assists, and 1.7 steals, per Basketball-Reference, during this winning streak. He is shooting 36.0 percent from three and 45.2 percent from the floor. His success on offense has made him more active on defense. That part of his game will be put to the ultimate test as he faces the top of his shooting guard class in James Harden.

Facing Harden is what I imagine facing Muhammed Ali felt like for boxers. Both make their opponents defeat themselves. Harden’s version of the rope-a-dope is trapping defenders into reaching just far enough in that he can draw the foul. If a defender gets wise and starts to sag off, then he will raise up and kill you from outside or simply give you another fake and finesse his way to the rack.

Hardaway Jr. did not fare well against Harden in their preseason meeting. Harden scored a game-high 36 points on 61.9 percent shooting (50 percent from three) while Timmy scored 21 points on 47.1 percent shooting (40 percent from three). But that game was meaningless. A big game against Harden tonight is all that really matters. We saw Porzingis torch Jokic Monday, now it’s Timmy’s turn to take on Slippin’ Jimmy.

A lot of the praise has gone to the starters and Frank Ntilikina throughout this three-game win streak. That praise is due, but I’m here to give love to Doug McDermott. When the Knicks acquired him in the Anthony trade I believed he could develop into a nice rotation guy. Hornacek has given McDermott minutes and it looks like he is finding his footing.

In his last three games he has been on fire from deep, converting at a 54.5 percent clip. If he continues to play well he could carve out a role as first wing off the bench. Same goes for Frank who figures to make the jump to the starting lineup sooner rather than later, methinks.

As for the guys out of the rotation; Willy Hernangómez will (hopefully) work back into the rotation as the season progresses. The same cannot be said for $9 million man Ron Baker. The Knicks are undefeated when he does not play which can be a coincidence or the cold truth.

Tip-off is set for 8 p.m. tonight on ESPN as well as MSG Network.