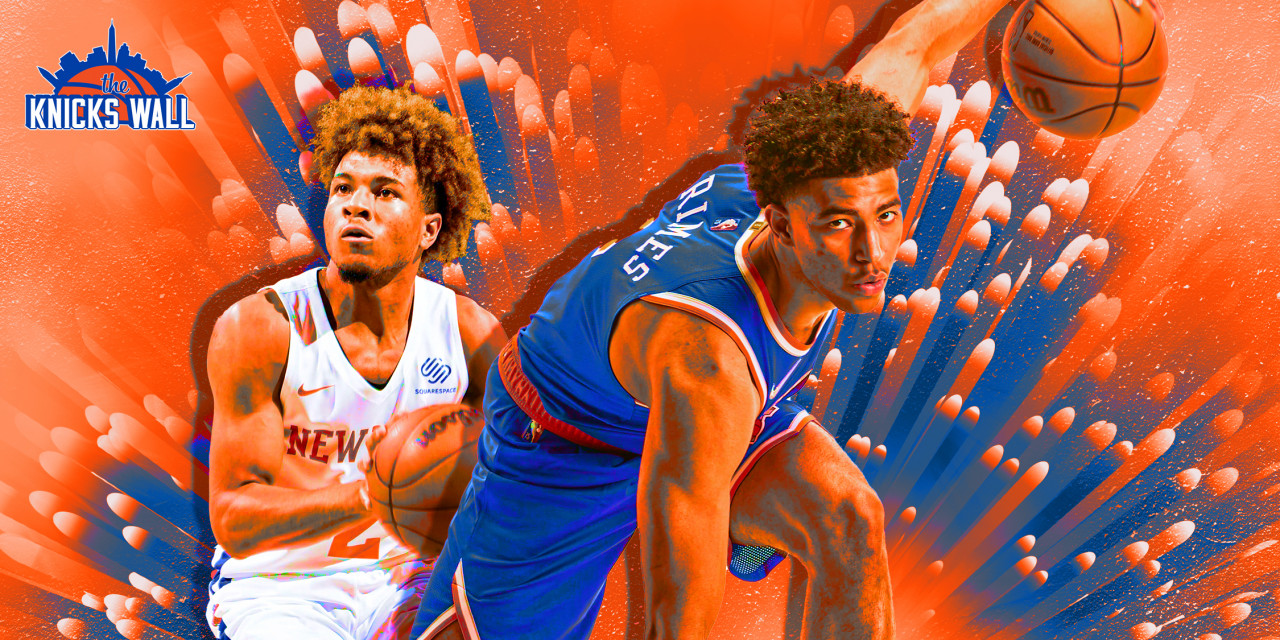 How will first-year players Quentin Grimes, Miles McBride, and Jericho Sims adjust to the NBA? These Knicks rookies could be depth pieces for a contending team.

Leon Rose and company were extraordinarily active on draft night, trading the 19th overall pick to the Charlotte Hornets, trading back from 21, and trading pick no. 32 to the Oklahoma City Thunder for nos. 34 and 36 in the early second round. The New York Knicks netted three draft picks that are expected to at least make some appearances for the team this upcoming season in guards Quentin Grimes, Miles McBride, and forward/center Jericho Sims.

After a successful 2020–21 campaign, where the Knicks established a solid foundation for success, many expected the Knicks to make a big splash on draft night and move up to get a higher-end player. Instead, they did some maneuvering and added three experienced and quality players who could certainly help out a squad with their loftiest expectations in nearly a decade.

How could this trio of rookies contribute this season and where do they fit in on a Knicks roster with aspirations of a deep playoff run?

Out of the three draft picks who will suit up for the orange and blue this upcoming season, Grimes has the most talent and upside of the bunch. The 21-year-old former Kansas Jayhawk and Houston Cougar landed with the Knicks at 25 and has excellent size at the guard position at 6-foot-5.

In his final season in college, Grimes averaged 17.8 points and 5.7 rebounds per game while shooting 40.3% from behind the arc, per Sports Reference. The former five-star recruit out of Houston was an integral part of the Cougars’ deep NCAA Tournament run this past season.

Grimes, while marginally athletic, has excellent shooting range, a high motor, and can get after it defensively on the perimeter. It is well documented that the Knicks struggled with perimeter defense at times last year and also experienced dry spells offensively. The selection of Grimes makes sense because he could be a perimeter stopper off of the bench (for his first year) and could provide instant offense with his ability to hit shots and create space.

Grimes’ lack of explosiveness and ball-handling deficiencies would likely force him to get minutes at the 2 guard, a spot where the Knicks need some juice. At this point in his basketball journey, I don’t believe Grimes’ offensive game is well-rounded enough to where he could become a starter and main scoring option, but I do see him developing into one due to his physical tools and experience in big college games. For this season, Grimes will likely be featured off of the bench in spurts where he can come in and try and slow down another team’s point guard or if the Knicks require some instant offense.

If Grimes can improve on his shot creation and develop a mid-range game, I do believe he can be a fixture at the shooting guard position for years to come, given that his strengths are defense and shooting, which is of the utmost importance in today’s game.

The Knicks’ other second-round pick in 2021 (after Rokas Jokubaitis, who will remain in the EuroLeague this season) was West Virginia guard, Miles “Deuce” McBride, a very popular selection among Knicks fans. McBride displayed incredible leadership abilities in his time as a Mountaineer and improved his scoring, rebounding, shooting, and assist numbers significantly from his freshman to sophomore year.

McBride is a bit small for the guard position but has a long wingspan and performs well enough in every aspect of the game, making him, in my opinion, the most NBA-ready of the Knicks rookie trio. The 6-foot-2 guard plays the game with a bulldog type of attitude and uses his compact frame and quick hands to his advantage to be able to compete with bigger guards and disrupt their rhythm.

To me, Deuce is a plug-and-play type of guard, who I envision having a similar impact that Immanuel Quickley had last season—with even better defense. McBride shot 41.4% from behind the arc in his final season at West Virginia, per Sports Reference, and could be a nice fill-in for Kemba Walker or Derrick Rose when the veteran guards are on the bench. McBride is already a better defender than the aforementioned Walker and Rose and has the pugnacious aspect of his game that will earn him the respect of the veterans when he gets his opportunities.

Like Grimes, I do not expect the Knicks to start Miles McBride over Kemba Walker, nor do I expect him to see more floor time than Derrick Rose or even Immanuel Quickley at the guard positions, barring injury. After this season is over, I fully expect Deuce to be viewed as a second-round steal around the league, since his ability to have an immediate impact and be a Swiss army knife type of player will allow him to shine and be a viable option for the Knicks full-time point guard position down the road.

New York’s final selection in the 2021 NBA Draft was high-flying forward Jericho Sims out of the University of Texas. The 22-year-old was drafted 58th overall after spending four years as a Longhorn.

Sims was a force in the paint during his time in Austin, leading his team in blocks and rebounds in his junior and senior seasons while helping his school win their first Big-12 Tournament title in 2021 with a monster 21-point, 14-rebound performance in the championship game.

The 6-10 Sims is incredibly athletic, big, and can move well for someone his size. We’ve all seen the viral video of Sims hitting his eye on the rim, showing that his bounciness is off the charts. Sims’ 44.5-inch max vertical jump at the 2021 NBA Draft Combine is tied for the third-highest jump in event history, per NBA.com.

Currently, Sims is on a two-way contract, where he will split time with the big boy Knicks and the Westchester Knicks. I believe the G League is where he will see the majority of game action, given that the Knicks are already pretty deep at the forward/center position with Mitchell Robinson healthy and savvy vets Nerlens Noel and Taj Gibson on the roster as well. Also, Sims is extremely raw and doesn’t have the requisite skill set to garner a significant amount of playing time and contribute on the NBA level this season. I do envision Sims in a similar role of Kenny Wooten of a couple years back, where most time is spent in the G League with few opportunities to play in the NBA.

Jericho Sims is quite good at basketball pic.twitter.com/3N0Azq38yE

Sims’ offensive repertoire is very limited at this point, as he has not yet developed either a back-to-the-basket game or is any sort of threat outside of the paint. Sims attempted one three-pointer in his college career and hasn’t shown any indication he is comfortable taking a jumper, even at the mid-range. If Sims wants to become a factor in the NBA, he is likely going to have to be more than just an alley-oop catcher.

Some time in the G League will help Sims become more of a smooth and refined talent and, hopefully, he can expand his offensive arsenal. The Knicks took a flyer on Sims in the late second round due to his insane physical abilities and his defensive potential, so I don’t see Sims becoming anything more than a rotational big man in the near future, but there is definitely value in that, especially if the Knicks’ big man situation becomes more unsettled in the coming years, with MitchRob’s health questions, Gibson’s age, and Noel’s limitations.

»READ: Can Quentin Grimes’ shooting and defense get him into the rotation as a rookie?