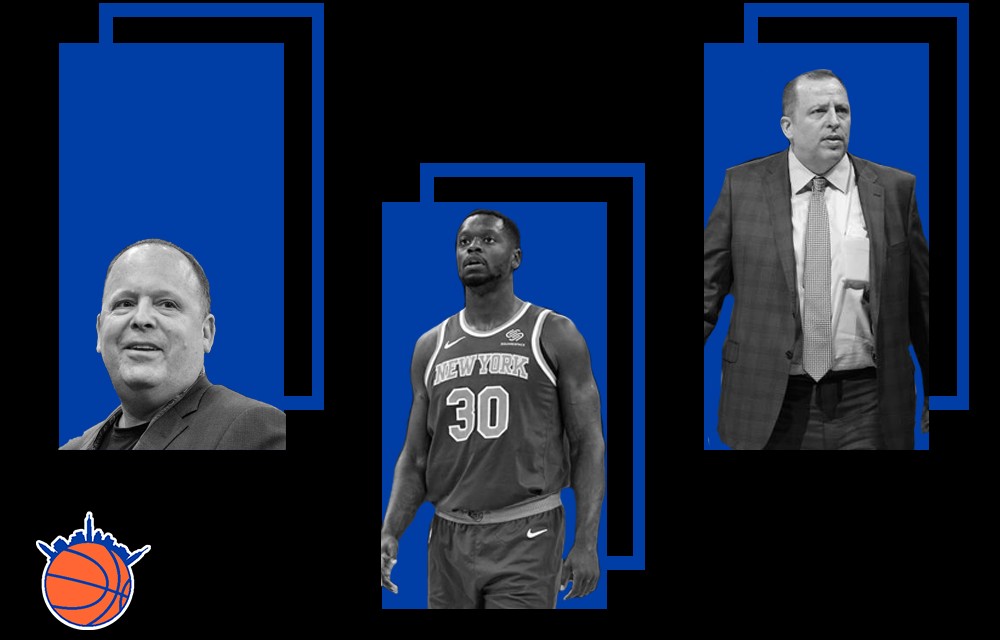 Over the holiday weekend—happy Easter and Passover for those observing, by the way—the New York Knicks were in the crosshairs of several rumors, ranging from a possible future ousted head coach to their new team president trading the franchise’s highest-paid player.

First, the New York Post‘s Marc Berman reported, in one digital mailbag, that Knicks President Leon Rose, a former CAA agent, would be willing to trade a current CAA client in the form of sixth-year power forward Julius Randle. Randle, 25, signed a three-year deal north of $60 million with New York last summer, with a team option in the third year.

Despite his relationship with Randle, a CAA client, Rose is certainly open to either dealing Randle or not executing his contract option for the 2021-22 season, though in that case, he still would count for $4 million on the salary cap. Leading into the Feb. 6 trade deadline, the Knicks were willing to move Randle and had talks with Charlotte. [New York Post]

SNY’s Ian Begley reported two weeks back that, in reference to the trade talks to Charlotte above, Julius Randle could have been moved at the NBA’s trade deadline in early February, with a deal that would have looked like point guard Terry Rozier and shooting guard Malik Monk coming to the Big Apple in exchange for the former New Orleans Pelicans forward, North Carolina native Dennis Smith Jr., and a protected first-round pick shipped off to the Hornets.

Now that the deadline passed, trade talks could resume with Charlotte or another franchise in the summer, when the Knicks will once again have the ability to flex their salary cap as one of the most liquid teams with space (maybe they could utilize that to take on a sunk-cost contract attached to an asset). Randle mostly did what he was asked this season, scoring at his own pace, but that came with negative consequences and headaches—like maligning his teammates, including rookie swingman R.J. Barrett, who was critical of the veteran’s ball-stopping.

The Knicks should continue to shop Randle in the offseason. Despite the Kentucky product’s flaws, Randle is not a bad player and has a somewhat reasonable contract that could feasibly expire at the end of the 2020–21 NBA season, should his team, the Knicks or another, fail to exercise the their option. Given the expected new leadership in the building (more on that later), it would hardly be a surprise for Rose to undo his predecessor’s move of signing the current highest-paid player on the team by trading him—especially a player like Julius Randle, who certainly doesn’t have the prestige or history with the franchise beyond a few months of work on a squad more than 20 games below .500.

Second, former Chicago Bulls and Minnesota Timberwolves head coach Tom Thibodeau was linked to the Knicks again. A former assistant to Jeff Van Gundy in New York and Houston, Thibodeau has been connected to the Knicks ever since David Fizdale was terminated a quarter of the way into his second season on the sidelines. Stefan Bondy in the New York Daily News (in a second mailbag, if you’re counting) referred to the ex-Wolves coach and president as “confident” in his ability to secure a vacant head-coaching gig for the 2020–21 season. Bondy also mentions the Rockets and Knicks cross-town rival Brooklyn Nets as potential destinations for Thibs. (Oddly enough, the Rockets have a full-time head coach in former Knicks head coach Mike D’Antoni, who has been on thin ice and is in the last year of his contract, so you would think a team with an opening would have a better shot at the free agent Thibodeau.)

Bondy also mentioned that Rose has been impressed by the Westchester Knicks ex–head coach Mike Miller, who was brought up by the big-league franchise at the beginning of the season to join Fizdale’s coaching staff and took the reins of the head coach job following Fizdale’s December 2019 exit. Miller only coached the Knicks for 44 games in 2019–20 and just six games during Rose’s official start to his front office tenure (going 3-3, if that matters).

Miller could be a welcome addition back to the coaching staff as an assistant, where he would be regarded as a development-forward motivator for this young Knicks team. His tenure in White Plains has been well-documented, and New York could tab Tom Thibodeau or another former Knicks assistant in the form of ex-Nets coach Kenny Atkinson as a more experienced head coach.

Last, while answering a question about the rapidity of the Bulls’ decision to hire Denver Nuggets general manager Artūras Karnišovas—a reported Knicks target for president prior to the Rose agreement—who was hired as Chicago’s executive vice president, Bondy reported New York’s interest in Cleveland Cavaliers senior director of basketball operations Brock Aller as Leon Rose’s assistant GM. Aller and the Knicks were engaged in formal negotiations to sign on to the Atlantic Division club’s front office. The current Knicks assistant GM is Gerald Madkins, who was hired by now-former team president Steve Mills and Scott Perry, the GM whose standing within the organization is still up in the air with Rose’s arrival.

The NBA’s current hiatus, borne from the coronavirus outbreak, doesn’t prevent the Knicks from hiring a new face in the front office, as the Bulls just brought in Karnišovas to run the show in the Windy City, for example, so there shouldn’t be any reason beyond contract negotiations stopping the ‘Bockers from bringing in Aller.