Knicks Run Out of Steam Against Mighty Bucks 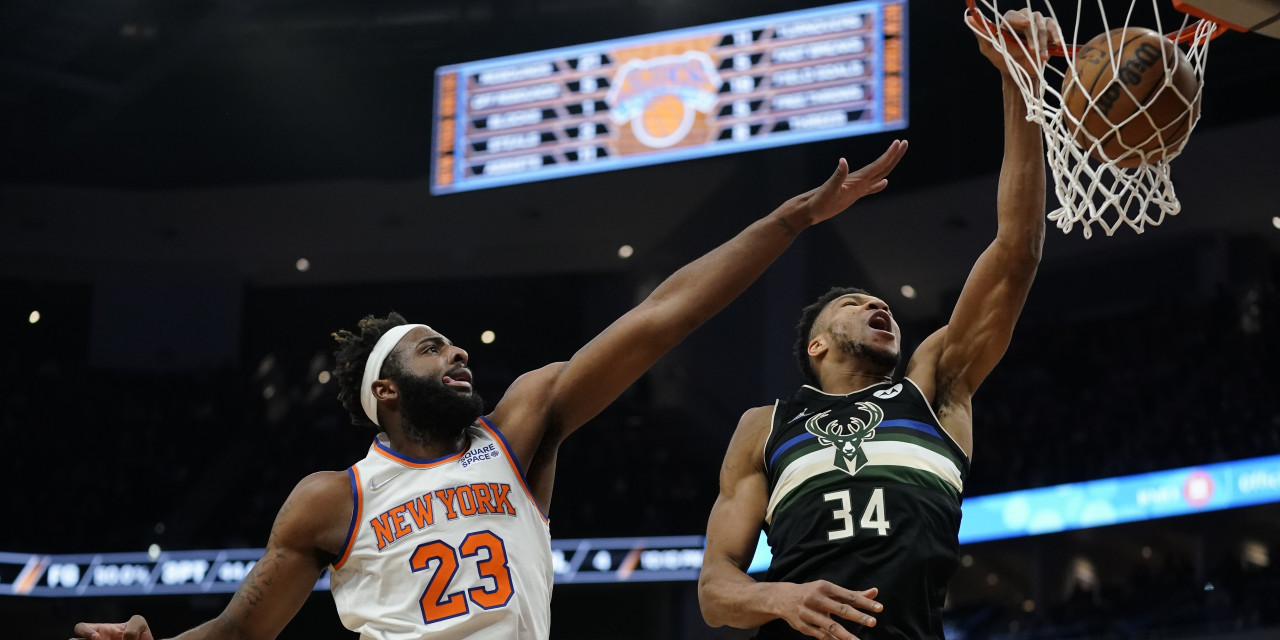 The Knicks kept up with the Bucks through three quarters, but the reigning NBA champs, and Giannis Antetokounmpo, pulled away late by the final frame.

It appeared New York was doomed prior to the opening tip when head coach Tom Thibodeau announced he would roll with the same starting unit in Milwaukee.

The Knicks had the worst possible start to open the game as a Julius Randle turnover led to an open right-corner three for the Bucks’ Bobby Portis. Randle’s poor play persisted, going scoreless in the first period in addition to multiple poor defensive efforts, which saw his direct opponent Giannis Antetokounmpo score 13 points in the period.

After conceding the first five points of the game, the Knicks starting group regained their composure with Kemba Walker pacing the offense with six points on 3-for-4 shooting in the early going. Walker’s backcourt mate Evan Fournier joined the party nailing back-to-back triple en route to eight first-quarter points.

Strong start for Kemba with 6 points on 3/4 shooting pic.twitter.com/hf0BSjwQbl

It was a free-flowing offensive first quarter with both teams scoring 30 or more. Milwaukee shifted New York’s defense with ball movement, picking the Knicks apart far too easily. The Bucks assisted on 10 of their 16 field goals with New York managing to keep up by way of five offensive boards and five made three-pointers.

The Knicks’ porous defense continued in the second, conceding three three-pointers which saw Milwaukee break the 50-point threshold just 15 minutes in the game. Rookie Quentin Grimes kept the Knicks peddling along with 11 points off the bench including a trio of triples, while Obi Toppin provided the highlights with two dunks, one of which saw Toppin dribble fake a dribble handoff for a ferocious tomahawk dunk.

OBI TOPPIN ABOUT TO EARN HIMSELF AN EXTRA 30 SECONDS OF PLAYING TIME pic.twitter.com/OlB6Er4hr0

Once the starters were reinserted, Randle and RJ Barrett pulled the ‘Bockers within one point of the Bucks behind eight points from RJ including 3-for-4 from the stripe while Randle netted two consecutive field goals, his first buckets of the night.

After an unacceptable defensive effort through the opening 15 minutes, things were improved as New York conceded 17 more points across the remaining nine minutes of the first half.

Both teams shot better than 53% from the floor and 45% from three (nine makes each) in the opening half in what was an offensive extravaganza. In a pleasing change of events, New York went 8-for-9 on free throws with Barrett connecting five times in six tries. The Knicks scored 63 first-half points, a surprise considering 12 turnovers were committed.

The Knicks starting group kept pace with the Bucks to open the third quarter but cooled off from three-point range, going 1-for-6 to open the period. Fournier kept the scoreboard ticking over for New York, scoring seven third-quarter points along with two assists.

Fournier having a really nice game. Missed the FT but followed this up with another three, now has 17 points pic.twitter.com/jA2Op0Eou2

The Knicks took better care of the ball in the third period, giving it away just twice, and consequently had more opportunities to score despite decreased efficiency. Barrett and Randle both added a further five points to their tally for the night, keeping their team within striking distance.

The Knicks continued their improved defensively play for the majority of the third period, including keeping the Bucks to just 1-for-9 from three-point range after Milwaukee went 9-for-20 in the first half.

A pair of perfect Antetokounmpo jumpers extended Milwaukee’s lead to nine to begin the fourth period while the Knicks themselves were forced into tough offensive possessions as a result of staunch Bucks defense. The Knicks looked fatigued after a difficult three-game road trip, and it showed. New York was unable to match Milwaukee when it mattered, with the offense stagnating and the defense missing assignments for the first seven minutes of the fourth period.

The boys wearing white lost their ascendancy on the glass in the fourth period, squandering a plus-10-rebound advantage after three to end the game out-rebounded 47-45. New York’s tired legs were evidenced by allowing six Milwaukee offensive boards in the final frame.

The starters, fueled by two Fournier triples, made a push with five minutes to play, cutting Mike Budenholzer’s 16-point lead in half with 3:56 to play; however, it was too little, too late. Giannis and the Bucks responded with a 10-3 run to close it out.

If only ever too subtle, Tom Thibodeau showed restraint and flexibility in the second period. The bench group gave up three triples in four possessions, however, no one was yanked from the lineup after the timeout. We also saw some previously unseen lineups including a decent stretch of Grimes and Toppin alongside starters Walker, Fournier, and Robinson. Speaking of Toppin, he played eight unbroken minutes, his longest meaningful stretch in recent memory.

To the eye, the role of Randle seemed to have been adjusted since the Miami outing. In the opening period, Walker was assertive with the ball in hand while in the second RJ had more reps on ball. Randle had more touches to begin the third, but it wasn’t working as to his and Thibs’ credit, the team went away from it. They still looked for Julius, but it didn’t seem to be as force-fed as was the case in the previous two games.

It is difficult to read much into this game. The Knicks were certainly much more competitive compared to Thursday’s outing in Miami, but it was an indication of where the Knicks are at. They played perhaps one bad quarter all up but that was enough to lose the game. It is all it takes against a good team. The orange and blue club has little margin for error and perhaps needs to play near-perfect basketball to win games. It will be an interesting lead up to the trade deadline, to say the least…

The Knicks will head home for two straight games against Sacramento and Memphis before embarking on a west coast trip.

Tonight’s TKW @PrizePicks of the Night:

• Mitchell Robinson OVER 3.5 first half points
• Jrue Holiday OVER 16.5 points for the game

The Knicks Wall’s PrizePicks of the night were a success, with Mitchell Robinson scoring six first-half points (totaling seven by the end of the night) and Bucks guard Jrue Holiday finishing with 24 points, over his projected 16.5.